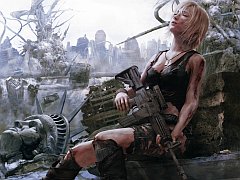 Fans of Parasite Eve reserve a special place in their memory banks for Aya Brea. She’s been the series’ protagonist since a time when Square Enix was still two different entities. In the late ’90s Square developed the series for PS1 based on novels of the same name. Aya took the lead role as an American detective at the centre of an outbreak caused by mutations in DNA, and later, in Parasite Eve II, joined a branch of the FBI dedicated to taking out the creatures that had spawned in the onslaught.

3rd Birthday’s Aya is a 39-year-old with a face so young it’s like she’s been hermetically sealed in an oxygen chamber for the last twelve years. In fact, her own “mitochondrial DNA” has stunted changes in her body and kept it preserved in its 20-year-old state. Also, it’s unlocked new abilities within her. The resulting super-Aya is the reason the game is only superficially a fairly standard third-person shooter compared to the RPG focus of the original title.

Yes, the crux of the action revolves around more gun-centric gameplay than either of the two preceding games. The combat is a fairly repetitive lock-on-and-shoot affair, but the gimmick of the game, Aya’s Overdive power, is its saving grace. Overdive isn’t that far a cry from the mechanic you saw in Square Enix’s 2010 shooter Mindjack (or likely didn’t see, judging by its sales). By focusing on another member of your squad you can hijack their body, taking over their stats and weapon layout. You’ll get a quick health bar boost when you Overdive into a healthy character, which is its own windfall in the more chaotic fights, but more importantly the mechanic eliminates the tedium that would otherwise have arisen from an overly typical combat style.

A lot of the game is squeezed into corridor-based levels, but on more open maps (that usually serve as the zones for boss battles) you’re given full reign to plan out strategic moves. The freedom lets you zap behind enemies, using your squad to distract them as you try to tactically work a flanking manoeuvre from behind. Other times you can focus on just taking out the hubs from which the Silent Hillian “Twisted” enemies spawn, using Overdive to hop from person to person in order to reach the generators while the rest of your squad deals with threats.

The other saving grace is the dramatic quality of the fights. 3rd birthday is being marketed as a cinematic action RPG, so it pumps out cutscenes on a regular basis and introduces set-pieces to many of the fights. The game might heave carts of local mutants into a room and tell you to fight them on foot, then minutes later cut to an extravagant video that pulls you into a helicopter, giving you a full view of the massacre as you go on sniper duty from on high.

One early level focuses entirely on your dodging abilities as you run from an enormous and invincible Twisted that chases you down a corridor in an abandoned New York building. Later you’ll be introduced to Stinkers – alien wasps, essentially – who rain down poisonous gasses over key areas until you shoot them down. The result is a constantly changing scenario with flying nasties who continuously pop up in different areas, strategically cutting off routes using walls of toxin.

But 3rd Birthday also continues the RPG-styled traditions seen in the previous games by incorporating a fairly impressive – although oddly convoluted – customisation system to optimise Aya. As you increase in level you collect new DNA chips which can be slotted into a nine-square grid and shuffled around into the most effective order. The way you actually line up the chips is also relevant, since their levels are combined and have an effect on her performance out in the field. Three level 1 antibodies in a row, for instance, become a level 3 antibody – although the effect the DNA has on Aya is rarely immediately clear.

3rd Birthday hasn’t been designed with the palette of the fans in mind. It’s likely that most of the old time followers of the series will be put off by the extremely shooter-driven gameplay – but despite having the structure of something very standard, the game has a deceptively creative centre. It might be overstocked with dark corridors and bullets, but it plays with that derivative style, fills it with scenes that are graphically impressive and wholly cinematic in effect, and ends up with something that is surprisingly interesting and entertaining.

3rd Birthday is full of scenes that are graphically impressive and wholly cinematic in effect, and ends up being something that is surprisingly interesting and entertaining.
8 Great graphics Interesting customisation Cinematic fights Repetitive combat

The third entry in the Parasite Eve series.

The third entry in the Parasite Eve series.