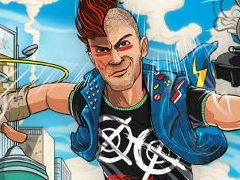 For most of the time you’re playing it, Sunset Overdrive is insistent on reminding you that it is a video game. The main character can’t resist making reference to mechanics, tropes, and other elements of game design, and lip service is also paid to real-world entities such as Reddit, GameFAQs, and NeoGAF. It doesn’t so much as break the fourth wall as obliterate it before getting in player’s faces and screaming ‘I AM A FUCKING VIDEO GAME, GET IT? DO YOU HEAR ME?’

Sadly, while Sunset knows it’s a game, it doesn’t seem to know that it’s not a very good one.

The core setup is, on paper, superb. Set against the backdrop of a large, vibrant city with a pleasing sense of both density and vertical scale, every square foot of the place seems to feature a piece of traversal equipment, interlocking grind rails with pole-swings and gigantic fans that bounce players high into the air, among others. Walking is anathema to the Sunset experience: instead, getting around the city is a case of chaining these aforementioned elements together, generating combos as you move, akin to Jet Set Radio or Tony Hawk.

Players are encouraged to mix and match traversal elements to fill a staggered ‘Style’ meter, with higher levels of style unlocked by diverse play and skilful combinations. These stages activate different ‘Amps’, equipable perks that contribute to your character’s movement or combat skills. For example, at a certain level you’ll be able to create a trail of fire when you grind, at another you have the chance to summon a grim reaper to help you in combat when you fire a specific weapon, at the highest levels they activate all at once.

Different Amps can be obtained by playing the story or by acquiring collectibles strewn around the world, rewarding players for not just grinding everywhere but by exploring both the city and their own movesets. It’s an organic system that constantly awards upgrades (to Amps, and also to movements and weapons as well) as you use your abilities.

Given this intriguing setup, and Insomniac’s enviable past record with weapon design, Sunset Overdrive sounds like a winner. In practice, it is hamstrung by an empty world, bizarre sound design, and an over-reliance on tired game mechanics that no amount of to-the-camera smirking can cover up.

The campaign, which clocks in at about 9 hours but feels like it goes on for 6 months, is a compilation of fetch quests that appear specifically designed to irritate. The city is littered with monsters (created by the Overcharge energy drink), survivalists, and corporate robots intent on silencing everyone. Your job is to speak to the surviving friendly factions, get them onside, and try to escape.

‘Try to escape’, of course, actually means going to a hideout, dealing with some of the most horridly stereotypical and fundamentally detestable characters since the Krays, and then doing their bidding. Mainly in the guise of going somewhere, killing a lot of things, and bringing something back.

This grates to begin with. After about two hours, it’s almost rage-inducing, not helped by the lead’s ultra-douche delivery and manner. It’s around about this point where the game acknowledges that it’s fucking you around: your created Fetch Quester literally exclaims his distaste of the situation, exasperated at having to go out and retrieve, say, a robot dog. And while this may seem like some sort of design epiphany, the end of an extended tutorial before the game proper, it’s not. You still have to go and fetch, before sitting in a rectangle on the map, killing whatever is in it. Over and over again.

This would not be as much of a problem if your combat interactions in these missions were engaging. They are not. There’s a healthy mix of weapons, each fulfilling certain criteria such as precision shots, crowd control, etc, and they can all be augmented with Amps. But your enemies, while technically diverse (robots, humans, and OD monsters all require different ordinance to take down effectively) aren’t any fun to battle against.

To watch Sunset Overdrive’s combat, especially towards the middle of the game when players are levelled up and can air dash and run on water, is to see what appears to be a great mix of shooting and environment-hopping action. But it just doesn’t feel anywhere near as satisfying as it should. Shooting is weak and near-automated, requiring players to just glance in the direction of their enemies and pull the trigger. The weapons themselves, perhaps excluding the powered-up revolver, lack a fundamental satisfaction: while it is sometimes fun to combine their powers, freezing enemies then using other guns on them, for example, it’s just not compelling enough as a whole.

While it is fun to use the world to your advantage in these situations – wall-running, double jumping, grinding, etc into one big combo, which then facilitates more carnage – for the amount of gunplay the game requires the combat just isn’t up to scratch, soon turning most encounters into a slog as you attempt to clear out wave after wave of foes and get on with the story.

Some will argue that to find this dull is to not be using your powers – or your imagination – to the fullest degree. And yet even when you’re air-dashing and hand-springing and pole-swinging, when you’re so powered up explosions are happening every time you bounce on a car, you’re always still fighting the same dull bad guys in similar environments. Sunset just doesn’t give enough enjoyable user feedback to make it all work: combat is poor, but even the comboing feels uninspired – there’s no real audible combo countdown timer putting pressure on players, and nor is there enough recognition that you’re going up the levels. Considering your rewards for stylish play are mainly combat-focused, it’s hard to feel bothered when your combo comes crashing down. It’s a score attack game where the score doesn’t seem to matter.

It’s a shame, because elements of Sunset Overdrive are utterly brilliant. It looks lovely, and there’s a weight and inertia to the player that makes pogoing around off-mission an utter joy (using the fans to bounce into the air calls to mind that feeling of being on a bouncy castle and being just the right side of in control). Some of the bigger set pieces hint at what could have been, tasking the player with using all their skills to navigate a gigantic floating enemy, fighting on a rollercoaster, or chasing down a train.

In retrospect, however, Sunset Overdrive is a game that doesn’t seem to have been able to build out on its initial promise. For every excellent element, there’s a poor design choice ready to scupper it all. Even the free and easy traversal is sometimes hampered by the sudden realisation that there’s no music playing, nothing driving you to new heights or better combos. Instead there’s just deathly silence, often followed by the observation that the world is empty. Multiplayer (see below) is the highlight of the package, but can’t rescue a poor campaign.

Sunset Overdrive’s campaign may be disappointing, but its multiplayer offers a glimpse of how a potential sequel could fulfil its largely-squandered promise. Built for 2-8 co-operative players, it consists of three rounds of player-voted maps (each with a unique objective) before culminating in a wave-based Night Defence finale. It challenges players to both work as a team and compete against one another, lending the score attack nature of the game, so underwhelming elsewhere, a real purpose.

It helps that the missions themselves are quite a lot of fun: you’ll be racing against players to plant a bomb, or grinding across a lava-filled underpass to recover teddies and outscore the opposition (touching the lava resets you minus your teddy, which is essentially a flag). The risk-reward element of combos and kills comes to the fore: you need to outscore others, but you also need to play well for the team, and so your decision-making becomes pressured, giving it an urgency missing in campaign.

There’s also a strategic element to Chaos Squad as a whole, an interesting feature which pulls your individual round choices into the endgame. Players are given the choice of two maps in each round, and both have advantages and disadvantages. Some will offer rewards to make it easier in the finale, others will increase the percentage chances that it will be harder but, should you complete it, will dish out more loot.

It’s an interesting wrinkle that stops players from just picking the maps they love over and over, and on the whole Chaos Squad is comfortably more enjoyable than single-player. It’s not perfect: there aren’t enough stages, some of the levels (such as the wrecking ball mission) aren’t great, and sometimes it’s tough to discern what is actually happening, given the amount of nonsense on screen (of which it must be said that the engine holds up phenomenally well). But I enjoyed the hours I spent playing it much more than the considerably longer time I had with the campaign.

Sunset Overdrive has some excellent ideas, but its triumphs are sadly suffocated beneath ultra-repetitive mission design and unsatisfying enemy encounters.
6 Superb traversal mechanics. Multiplayer can be a lot of fun. Mission structure is terrible. Enemy encounters quickly become boring.