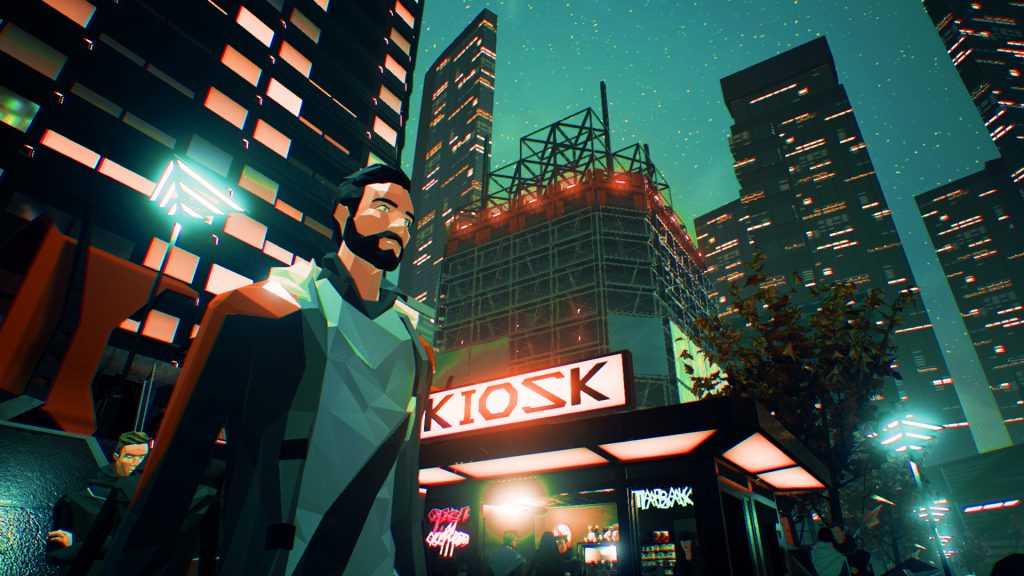 All is not well in the world of Richard Nolan. He’s just been in a car accident; his wife and son are missing; he’s lost his job; and there’s a robot, who he really isn’t fond of, hanging out in his apartment. Furthermore, it’s difficult to tell just what his world is, where its edges are, and what’s real. Neo may have had similar quandaries, but he was a superhero who knew kung fu; Nolan is an investigative journalist, a muckraker with a habit of getting manhandled.

For State of Mind, the new game from Daedalic Entertainment, that’s no bad thing. Who needs combat when you have casework? It isn’t just any casework, either; it’s good old-fashioned case work, the sort you used to find in this medium’s equivalent of the film noir era: the age of the point-and-click adventure. It was to my great delight I encountered, in Richard’s apartment, not the usual appurtenances of the dystopic future-chic pad – the glass tables, the holograms, the beeping knick-knackery – but a corkboard. You know the sort: a stormcloud of clippings and questions, photos and theories. Granted, this one was a ‘Holo Pin Board,’ but it’s the sentiment that sings.

It’s on this board that the game’s incidents are plastered, that Richard’s hunches take shape, and that we come to know the workings of his mind. Even before his recent misfortunes, Richard was a man of crotchety temperament, at odds with the world he lives in. We know this because he is voiced by Doug Cockle, whose every syllable – honed from his turn as Geralt of Rivia – rumbles with dissatisfied distance. His grousing is, as it happens, justified. The world in 2048 is a cooling rock, drawn of its resources and drizzled with rain; the government (brace yourself – ‘The United States of the West’) rules with martial law, enforced by pencil-thin robots; and aside from Mars, which is proffered on posters as ‘our future,’ the only avenue of escape for the proletariat is that of the virtual. 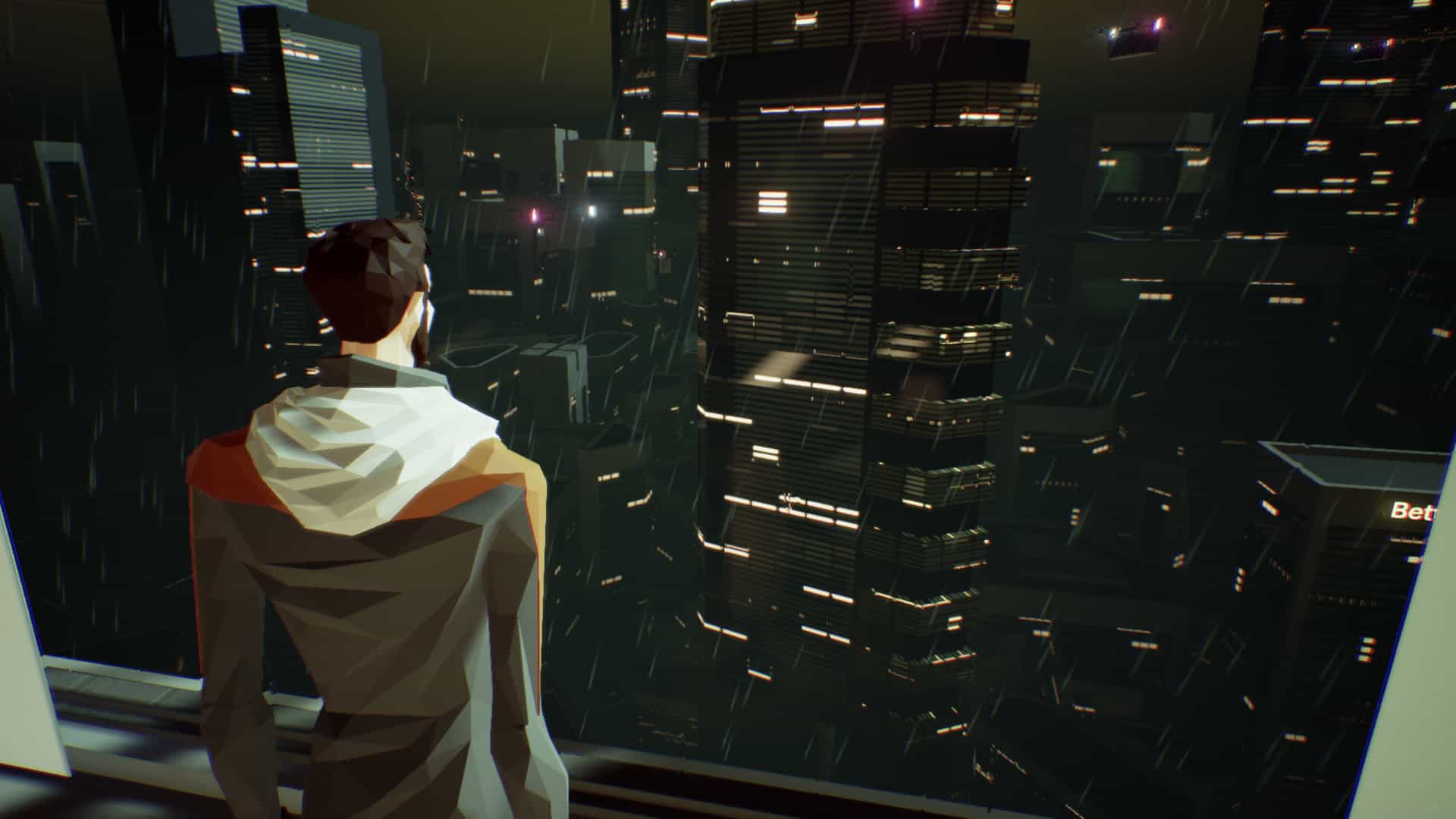 It’s fitting, then, that playing State of Mind means being in a state of existential uncertainty. The characters are wire-limbed frames, made up like walking trellises of tessellating shapes, and they move in a glassy 60fps, as if smothered in low-poly lubricant. Ingeniously, some humanoid robots are difficult to set apart – only betrayed by glimpses of exposed metal, or slices of flesh replaced with wiring. More than a curious thrill, the game’s aesthetic bears the weight of ideas.

Early on, you encounter a shattered mirror in Richard’s bedroom; the sharp pieces echo the motif that permeates all the layers of the world. Deus Ex: Human Revolution was similarly transfixed with triangles, its cyberpunk style fused with renaissance art – characters with flaring ruffs, like the plumage of a peacock, and pleated jackets like retracted wings. In State of Mind, this same motif speaks to the DNA of the medium, the triangles of the 3D Polygon mesh – and in pronouncing the jagged edges, it calls reality into question.

And with short-temper and journalistic instinct, it’s Richard that does the asking. Much of this falls to you, by way of item-driven sleuthing and loose-logic puzzles. Wandering about Berlin, the game’s primary setting, you’ll see points of interest capped with green beacons: characters to talk with, objects to examine, items worth pocketing. Your next lead is never far, and neither is the next puzzle. These take the form of sliding tiles, of pairing up newspaper clippings with your mission brief, or hacking aerial drones and making use of their scanning tech. The puzzles are more fidget spinners than they are rubiks cubes: there for indulging mechanical urges, not for taxing the brain. The game is cleansed of the insanity of puzzles gone by – the sort of lateral lunacy that held court over the genre in its halcyon days – but it could do with a girding of challenge. 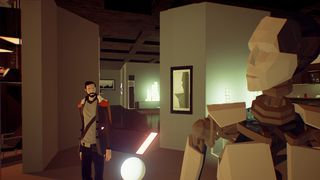 That comes by way of the ribboning plot, each kink and coil requiring your attention. The story beats a through-line that ropes in a photo album of cliché: the Orwellian police state encroaches from all angles, while the looming of corporate greed casts long shadows. The villain of the piece, a man by the name of Kurtz (by now a hoary shorthand for corruption and mania), is a tech magnate with a scraping of silvery hair, a pair of pince-nez, and a black void of a jumper, with sleeves rolled up. He bears a striking resemblance to the late Steve Jobs, and is seized with the same keynote zeal. Unfortunately, he has no moustache to twirl. These familiar fragments, though predictable and tired, fit together like the triangles of the game’s makeup, and form a compelling whole.

The narrative has you switching between characters, and locations, pulling on spools of plot from various angles and points in time until it coalesces into a panorama. Away from Berlin, there is the utopian City 5, which is reminiscent of Aldous Huxley’s Brave New World: a vision of gleaming white funiculars, misty-green air, and low-idling sun. At the city’s upper reaches, trilling birds and still palms give the rooftops the muggy feel of glasshouses. The careful twist on this familiar vision is that the drug of choice is technology, the misery of reality shrouded in holographic glamour. The Cowardly New World.

That State of Mind betrays such literary leanings should come as no surprise; it arrives, after all, from the studio behind The Franz Kafka Videogame, and comes similarly freighted with fret. Its play might have been more potent if it came imbued with greater difficulty, but the real challenge in State of Mind comes in grappling with its ideas – which have stayed with me in the days after. The tenets of Huxley’s New World State keep whorling round my brain: “Community, Identity, Stability – ” all fractured into shards like Richard’s broken bedroom mirror.

The originality of its vision and the thrust of its narrative more than excuse some sci-fi clichés, and you’re left with a breezy adventure game which compels with its ideas, if not always with its play.
7 Striking art style A compelling story in an intriguing world Puzzles could do with some challenge leans on clichés in its plot 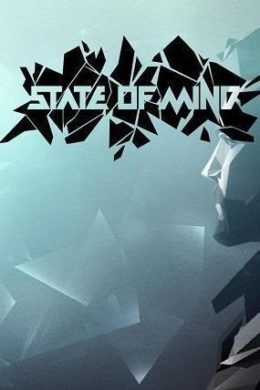