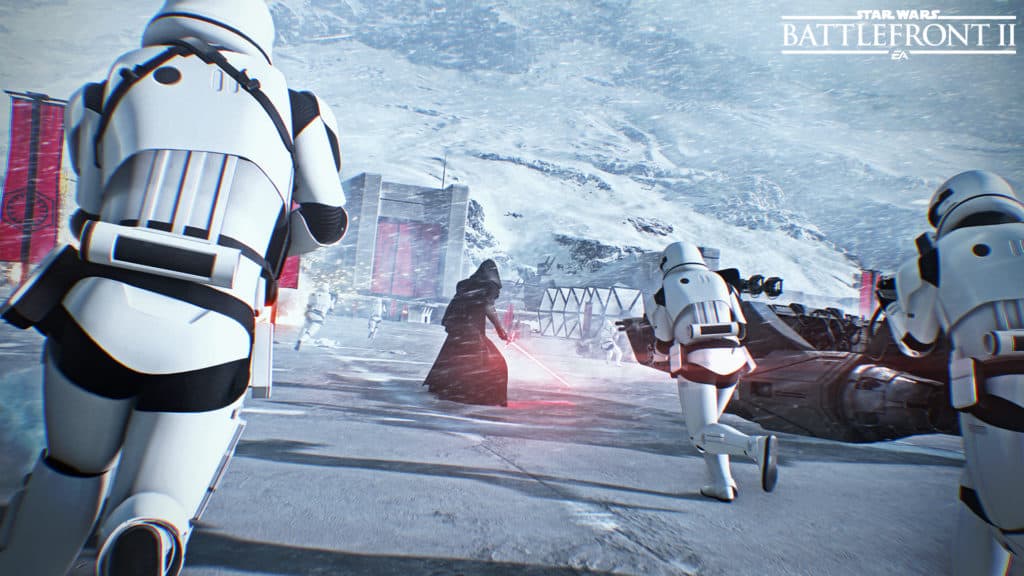 The dreadful truth of Star Wars Battlefront 2 is that a lot of it improves on the previous game. It’s like someone on the dev team, presumably a Star Wars fan, was on the receiving end of a very specific curse from a techno-witch. See her laughing in her Doc Martins and tour tee from an obscure metal band’s final show, hand outstretched. ‘You’ll get to work on a Star Wars game and design all the cool starfighter ships,’ she says, ‘but will also have to include a convoluted progression system that integrates loot crates! Hahaha! AHAHAHAHAHA!‘

I feel sorry for this imaginary dev, so let’s do the good first. The core game – the huge 40-player online battles in Galactic Assault, where you’re a footsoldier in the war between the Rebels and the Empire, and the 12v12 space dogfights in Starfighter Assault – is good! Galactic Assault in particular benefits from better map design, with interesting terrain, well placed cover, and varied objectives making for much more interesting battles than 2015’s Battlefront (the Assault on Theed from the beta remains a stand out, as is a desperate firefight in the ruins of a crashed Star Destroyer on Jakku, and trying to steal an AT-AT in the Endor forests). Starfighter Assault has also been spruced up, and remains my favourite mode, as well as potentially the most Star Wars-y because you get to fly in an X-Wing, everyone, but everyone else seems to think this as well, since I can always jump into a Starfighter match without waiting, whereas Galactic Assault matchmaking can be frustratingly slow.

If you’ve not got the time you can jump into smaller games like Blast, 10v10 straight up ‘kill all the other team first’ matches on smaller maps that get messy, or Strike, games where even smaller teams compete for objectives – think capture the flag but Star Wars-themed – that are loads of fun precisely because they can get so desperate and down-to-the-wire. In each of these you can switch classes before you respawn to whatever you think is more useful, or prefer playing as, and your choice does feel more consequential. In Strike, for example, being able to plant and deploy your shield as a Heavy is a good tactic, but I prefer playing as a general Assault troop because they feel more versatile.

It’s all good fun, but probably not as much if you’re not a Star Wars fan. If you didn’t pretend you were flying a TIE Fighter or swinging around a lightsaber when you were a kid then being able to do so in a video game won’t mean much to you. There are loads of little bits that will resonate more with fans, like the right details in how different era Stormtroopers look, and how the maps and battle scenarios take place across the whole Star Wars timeline, so you might be fighting on the Death Star or on the cloning facility on Kamino.

The single player campaign does a similar thing, but starts with the destruction of the second Death Star and fills in some gaps between that happening and the start of The Force Awakens film. Iden Versio, the new protagonist, is pretty great. She’s the leader of the elite Stormtrooper group Inferno Squad, so you start by seeing things from the Empire’s point of view and go from there.  Versio is an infinitely likeable and interesting character, especially in interactions with other characters cast as a foil to her. The single player is too long, though, by a very specific amount of time, and that amount is however long it takes you to complete the final mission. The story can only go up to a certain point, because the next chunk will be delivered to coincide with the next movie coming out, which means the final mission is currently flapping about between the previous story and the next one. The biggest complaint about the campaign, though, is that Iden’s not really in it enough. Every couple of missions you’re taken out of her big stompy boots to slip into the shoes of one of the classic trilogy heroes, and they’re the sort of shoes that look cool but are kind of impractical and uncomfortable in practice.

You get to play as the heroes and villains in the multiplayer too, of course. In regular multiplayer you earn Battlepoints for stuff like killing enemies or playing the objective, which you can use to buy in as Rey or Han Solo – providing you’ve unlocked that character and they’re not already being played by someone else. There’s also Heroes vs. Villains, a 4v4, light vs dark match making a return from Battlefront. It’s one of the reasons the credits that heroes and villains cost to unlock was changed – if you want to play Heroes vs. Villains, but all the heroes you’ve unlocked were taken by other players you just can’t play. It’s also in this mode that you might notice the microtransactions start to bite.

The progression system in Star Wars Battlefront 2 is based around Star Cards, also returning from the previous game. This time around Star Cards are more critical to your game: they now not only swap your in battle abilities around, but can also boost you with passive abilities, like higher health or getting more in-game currency per battle. They also have rarity now, from Common to Epic, and tie into your game progression. In addition to having an overall rank determined by how much and how well you play, you also have a Card Level for each class and hero you play as (including starships), which is determined by how many Star Cars you have for that class. You won’t unlock the third Star Card slot for each class until that class is at Star Card level 10.

You get and upgrade Star Cards by either using Crafting Parts, another in-game currency, or in loot crates. The crates come in Trooper, Hero and Starfighter flavours. You’re not guaranteed how many items you’ll get in a crate, what rarity they’ll be, or what classes they’ll even be for. A Starfighter Crate might not contain any Star Cards for the Interceptor Class that you wanted, but thank god you got an ability for Emperor Palpatine, a hero you haven’t even unlocked yet. Loot crates are bought with credits you earn from battles, or, until EA turned the system off, crystals, which cost actual money to buy. Maybe you can get the Star Cards you need with the crafting parts, except the easiest way to get them is also when they turn up in loot crates.

You are not alone in finding this confusing. It’s also frustrating. The fewer players there are, the more noticeable it is when someone has a lot of good Star Cards, and most especially in Heroes vs. Villains. Before you’d think eh, it’s fine, they’re good at the game and they worked for that. But now you think maybe that bastard just bought all that talent in the beta. EA has currently turned off the microtransactions while everyone figures out what happens next, but the weird, grindy progression system still exists. And it’s a shame because it’s bogged down what is otherwise a good Star Wars multiplayer game.

A good core game of cool Star Wars battles on fun and interesting maps is bogged down by clumsy, convoluted progression systems, and the single player is interesting but unfinished.
6 Core multiplayer is good & has better maps Authentically Star Wars-y fun What the heck is going on? Progression/microtransaction interaction is confusing and intrusive