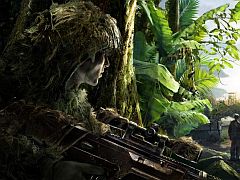 I consider myself to be a happy person; I’m healthy, outrageously attractive and get paid to express my opinions on video games for a living. It’s a good life. After an hour or so with Sniper: Ghost Warrior, however, I had the most compelling urge to end it all, to throw myself face-first out of the nearest window. Sniper is one of a rare breed of games that has the ability to invoke such dizzying levels of frustration that suicide seems a less painful alternative to playing the game. Sniper is a technical holocaust: an interactive compilation of glitches, bugs and design errors haphazardly stitched together with long stretches of dull and broken gameplay.

It’s a shame to have to speak about the game with such venom because, despite its flaws, there’s a gap in the market that it fills quite nicely. The FPS genre is teeming with shoot-first-ask-questions-later kind of titles, games that involve squeezing the trigger the split-second an enemy appears behind the crosshair. Ghost Warrior is quite refreshing in its digression from that template. It requires patience and a one-shot-one-kill kind of attitude that you won’t find in other games. It could have been different. It could have been interesting. It could have been – dare I say it – good. Instead…well, just read on to find out what went wrong.

The game pops you in the weather-beaten boots of Sergeant Tyler Wells, an elite sniper who’s part of a highly-trained special ops unit. This unit is sent to the fictional island of Isla Trueno, whose democratic government has been overthrown by a hostile force. Underneath this generic military drivel there’s not much of a plot to speak of. The characters driving the narrative are dull, forgettable and distressingly similar to the clichéd soldiers we’ve met in any run-of-the-mill war games from over the years.

To say that Ghost Warrior wears its inspiration on its sleeve would be a massive understatement. The ghillie suits, environments (the oil rig in particular), menu screens, hidden intel collectibles and abundant use of phrases such as “stay frosty” are all straight out of the Modern Warfare handbook. Sniper is the equivalent of those knock-off designer sunglasses you find at dodgy back-street vendors on holiday: cheap, nasty and likely to break at a moment’s notice. The finger of blame can be confidently pointed at City Interactive’s Chrome 4 engine, the source of most of the game’s problems.

At first glance the lush green environments might appear attractive, but the devil’s in the details. Upon closer inspection it’s hard to miss the dodgy textures, flashing polygons, and cold-hearted lack of anti-aliasing. Whilst distressing to look at, you can eventually train your eyes to ignore these graphical blunders. What can’t be ignored, however, are the issues with collision detection. Invisible walls would often prevent you from walking through thin air, forcing you to jump (over nothing) or find a whole new route to advance. Elsewhere there are objects that have no collision detection at all, meaning you can walk through rocks, trees and fences without the slightest respect for the laws of physics.

While on the topic of physics, let’s take a moment to consider the most infuriating, hilarious and mind-baffling object in the game: the grappling hook. Used to ascend to higher areas or rappel to lower ones, the grappling hook can be aimed and fired much like your other weapons. Once latched onto its target, you can hoist yourself up as if ascending an invisible flight of stairs. It literally makes no sense – you can stand in mid air, making a mockery of Newton and his cherished laws of gravity. It’s bloody hard to control too, and once the comical value of the device has worn off, you’ll be left with intense feelings of anger and frustration.

Worse than all of this is the artificial intelligence, or more appropriately, the complete lack of it. The bumbling morons that populate the island are simultaneously blind, deaf and dumb, and all-seeing, all-hearing and all-knowing. At times you can shoot an enemy, and his pal, stood less than a meter away, won’t bat an eyelid. You can sneak past guards who appear to be looking right at you, but who for some reason decide not to open fire. On other occasions the enemy will suddenly become aware of your presence for seemingly no reason whatsoever, even though you’re crawling in the middle of dense undergrowth in your ghillie suit. There’s such a lack of consistency with the AI that it’s hard to know how to best proceed.

The mind-boggling thing is that the game has already been given an update to fix a bunch of the aforementioned problems. I dread to think what the code was like before this point, because even with these ‘fixes’ Sniper is a horrible broken mess of game. That said, the actual sniping sections of the game aren’t too bad, even if they don’t crop up as frequently as the title would allude to. If you line up a perfect headshot, you’ll be rewarded with a bullet cam that faithfully follows the path of the shot as it hurtles through the sky and into the head of an unassuming enemy. It’s complimented by just the right amount of blood, and is surprisingly satisfying as a result. Even so, the levels are little more than cleverly designed corridors, and not the expansive environments that would actually suit sniper rifles.

It’s not all sniping though. The game is broken up with numerous stealth sections but, as you can probably guess by now, they’re terrible. A stealth bar running across the bottom of the screen attempts to let you know how well hidden you are, but enemies seem to act independently of it. The radar is utterly useless too, marking enemies that aren’t there and failing to mark enemies that are. Ghost Warrior juxtaposes creeping levels like these with all-out action stages, in a style you’d expect from Call of Duty or Battlefield. While the handling of the scoped weapons feels suitable, the machine guns and rifles used in these run-and-gun sections are very imprecise and not all that much fun to wield. The game should have stuck to its guns and just focused on the sniping aspects, because the other gameplay variants only prove to further hinder the experience.

Stripping away the moronic AI and redundant plot of the campaign mode, all we’re left with is a multiplayer mode which could actually be considered quite good fun. Up to 12 players can camp to their heart’s content, setting up a sniping spot and playing the long game as they patiently take out their opposition. It still suffers from the same myriad of technical difficulties, and could do with more levels and guns, but it’s certainly a lot better than its story-driven counterpart. Sadly though, it’s not enough to save the game as a whole – not even close.

A sniper-centric FPS is certainly an interesting concept on paper, but Ghost Warrior fails miserably to capitalise on its potential. A frightening lack of originality, uninspired objectives and a shedload of technical issues make Sniper one of the worst shooters this generation. There’s a slither of fun to be had from the multiplayer, a taste of what the game could be like without the cretinous AI handicapping the experience, but it’s not worth taking the time to check out. Don’t let this game anywhere near your console.

A frightening lack of originality, uninspired objectives and a shedload of technical issues make Sniper one of the worst shooters this generation.
3 Bullet-cam is pretty nifty Dopey AI Horrendous use of collision detection Dull and generic plot

As one of a group of covert commandos, the player is charged…

As one of a group of covert commandos, the player is charged…