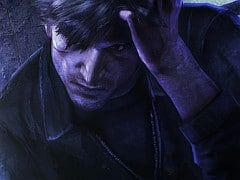 Silent Hill: Downpour, the eighth title in the series, comes out at an interesting time – after the critical disappointment of Homecoming and the commercial upset of Shattered Memories, Konami’s decision to hand the series to another unproven developer is more than enough get the alarm bells ringing.

It doesn’t come as a big surprise that Downpour can’t match the series’ former glories, then, but this tale of escaped convict Murphy Pendleton and his almost comedic trek into Silent Hill (his prison transport van crashes because the driver gets distracted for a couple of seconds) knows how to conjure up a few of its own chills and thrills.

Pendleton’s initial portrayal isn’t one of a Particularly Nice Man, and the game’s opening sequence has you brutally savage a naked fat bloke in a prison cell while originally providing no reasonable context – it’s also a nice little touch of showing how gamers will do anything provided there’s an in-game command to do so. Lamp the funny looking porker with a bit of broken stick! Do iiiiiit!.

Still, developer Vatra Games uses the opportunity to conjure up an increasingly mean version of Silent Hill, where this time round even the town itself seems to be going out of its way to torment Pendleton. Latching onto some of the series’ most central themes and running with them, Vatra gets particularly good mileage out of the idea that Silent Hill moulds itself to each person: this incarnation of everyone’s favourite spookytown twists and contorts itself as players sit back and watch, and over in the rusty Otherworld entire areas are built out of nothing while walls stretch, shrink and dissolve.

It takes a considerable chunk of time to get to these more interesting moments, however. The opening couple of hours serve as a tedious trudge through Silent Hill’s outskirts, and one laborious and lengthy jaunt through some underground mines really tests your patience to distraction point. I found myself having to play through this prologue act in the teeny-tiniest of chunks, taking a fidgety break every few minutes to check Twitter or play a round in DrawSomething. It’s a slog worth making, but a slog nonetheless.

Silent Hill itself, however, is now a quasi open-world environment, which you can fully explore once you finally arrive, and the town is now also peppered with a chunk of optional offshoot quests that flesh out the game’s surprisingly longwinded context and setting. There is often a material gain to these various sidequests, but I found it was generally the allure of finding out about another one of the game’s dark stories that encouraged me to see them through. Silent Hill is, unsurprisingly, a particularly miserable place to be. Wandering around your environment and solving the game’s taxing puzzles (their difficulty can be adjusted in the options) is a satisfying way to spend a few hours.

Once it picks up, then, Downpour really settles into its own groove. It’s a long, bloated game – clocking in at well over 12 hours if you want to rummage for everything – and the game’s structure would actually be a lot better if the whole thing was trimmed down by a considerable chunk. The game’s ending is also really disappointing, and pulls a particularly cheap narrative trick that I found hard to stomach.

This large and open version of Silent Hill comes at great cost, and most of the game’s other mechanics seem to have suffered in its creation. Chief amongst the offenders is a combat system so outdated I wouldn’t be surprised if Vetra games had it shipped it in especially from 1999. Fighting monsters, which is done by mashing your attacks and occasionally blocking, feels clunky and detached, with weapons that all feel like they’ve got the wrong weight. The environment is littered with numerous objects that can be used to kill – in many respects the system comes across as a budget version of Dead Rising 2 – and you’ll quickly learn to filter the jewels from the junk, such as fire axes and kitchen knives.

This is a nice idea, but it’s also been purposefully hindered because Vetra wants you to run instead of fight. This kind of purposeful handicapping feels more like self-mutilation, though, and it perfectly highlights Silent Hill’s problem in today’s marketplace: this is a series that works best without combat at all, but the Lovely Men in Publishing would much rather a game where you lamp monsters with a trailer provided by tweeny nu metal band Korn.

It’s also a particular shame to see that Downpour’s score can’t match with Akira Yamaoka’s chilling soundtracks, and you never get that nails-on-chalkboard sensation from the game’s new sounds. It might look the part, but this just doesn’t sound like a proper Silent Hill game.

I also found myself having the occasional technical hiccup, with the game intermittently slowing to a crawl after getting bogged down with autosaves. Quitting the game and restarting it smoothed things out for me, but it’s safe to say this isn’t the most technically competent interpretation of the Unreal Engine on the market.

Silent Hill: Downpour comes to market with a fresh perspective and plenty of good ideas. Pendleton’s quest for redemption is particularly interesting, and he’s one of the series’ most interesting protagonists in an extraordinarily long time. Downpour is certainly rough around the edges, but dig beneath its wonky mechanics and you’ll find something worthwhile.

Silent Hill: Downpour comes to market with a fresh perspective and plenty of good ideas.
7 Some unsettling moments Good lead character Terrible combat Takes too long to get going

A new entry in the hit survival horror franchise.

A new entry in the hit survival horror franchise.