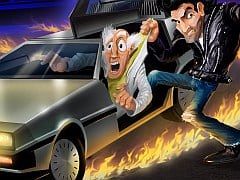 Development on Retro City Rampage started decades before developer Brian Provinciano even consigned the first line of code to his computer. This seven-year production was born in the eighties and nurtured ever since, and while an indie game influenced by the era of chunky 8-bit graphics and chiptune soundtracks is about as rare these days as somebody complaining about Modern Warfare in a comments thread, Retro City Rampage binds itself together with enough nostalgic passion to make the whole experience shine.

Retro City Rampage is a patchwork title stitched together from many other games, presented in the style of a stripped down Grand Theft Auto. Your city, Theftropolis, is a small but dense world that manages to conjure up the illusion it could actually be squidged onto a Master System cartridge. The 26mb (quite a bit bigger than the 8-bit era’s 512kb cartridges, admittedly) GOG.com download even runs admirably on my work PC, which is probably ever so slightly less powerful than the original NES.

While you’ll be spending most of your time riding around in various dinky cars and squishing pixelated pedestrians, the real enjoyment comes from the game’s concentrated barrage of pop-culture references. Retro City Rampage’s best trick is its ability to make you recall something else from the eighties and nineties every time you boot it up, with many of its references coming thick and fast as you drive past billboards, road signs, and characters. One of the first things I spotted in the game was, I think, the wagon from The Oregon Trail. I’m not even sure if it’s intentional (Retro City Rampage has an uncanny knack at making you second guess your gaming culture) but it’s a game that makes you sit back and share the enjoyment of a period of history that the unfortunate children of today will never get to experience.

These jokes are rarely nuanced, though I doubt anyone is going into a game featuring a character called Dr Von Buttnick expecting the narrative elegance of Hilary Mantel. There’s an epic vastness to this massive barrage of references, with many rattled off too quickly for the average human brain to mentally process – you’ve really got to pick at strands to unfurl these myriad in-jokes, but doing so is always a lot of fun. From the original Metal Gear to Vanilla Ice, I’ve spotted something new about the past every single time I’ve booted up the game.

Some of its jibes – such as the Hot Coffee stands – are aimed at a more modern context, though these references tend to fall a little flatter than its golden oldies. An annoying mission that lambastes the open-world genre’s annoying missions is still a rather annoying mission, basically, though it must be noted that Retro City Rampage handles its combat and action with a certain finesse that even many of its modern day contemporaries still manage to fluff up.

Many parts of Retro City Rampage are packed full of more charming fun than the modern incarnation of another open-world game series I am afraid to mention, but this isn’t a game that particularly comes alive in the mechanics. You can doddle about getting haircuts, exploring back-alleys and going on killing sprees – amongst other things that are better experienced first-hand – but the novelties of its callbacks are what power you to go from set-piece to cutscene and back again. That its main strength is its world doesn’t really make Retro City Rampage much different than plenty of other open-world games, then, only I found myself far more drawn to the kooky nostalgia of Theftoroplis than yet another virtual rendition of New York.

The best moments of Retro City Rampage come from a shared enjoyment of the past, such as when you realise you can stomp on the heads of pedestrians for bonus points or switch the game’s colour filter to make it look more like a Mega Drive game. Here’s a game that raises a glass to the past, and while Retro City Rampage is never as good as the strength of its references there’s still plenty here for lovers of nostalgia to get involved in.

The best moments of Retro City Rampage come from a shared enjoyment of the past.
7 Ace style Full of great references Missions can be a bit weak Not for smelly young people

Carjack the ’80s at 88mph and go on a Retro City Rampage!

Carjack the ’80s at 88mph and go on a Retro City Rampage!