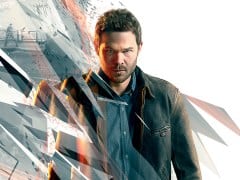 A few years ago Quantum Break was a dead cert to become the game most likely to be dragged into the ‘console war’. But now, less than three years into this generation and with the war all but won by Sony’s PS4, Remedy’s game arrives with less weight on its shoulders. Sure, there’s undoubtedly pressure for the studio to deliver, but more for the fans than to play a part in a battle to the death with Sony. On this front I can confidently say that Quantum Break is a game fans of Remedy’s output will lap up, even if it doesn’t have a slow motion dive. Why oh why doesn’t it have a slow motion dive?!

Quantum Break’s time travelling tale gets more complicated the more you think about it, but the setup is pretty simple: Player character Jack meets up with long-time friend Paul at the science block on the Riverport University campus. Jack’s brother William had been working with Paul on some breakthrough tech that turns out to be time travel, and let’s just say some bad stuff happens. Paul becomes the game’s villain alongside his second in command, Martin, and Jack has to SAVE THE WORLD. In other words, Iceman from X-Men has to stop the world from ending by defeating Littlefinger from Game of Thrones and Broyles from Fringe, who are using the machine created by Charlie from Lost – and LJ from Prison Break is along for the ride as a computer geek.

You see, Quantum Break isn’t just a video game, it’s also a TV show, and as such features proper actors. Shawn Ashmore, Aidan Gillen, Lance Reddick, Dominic Monaghan, Marshall Allman and more are all recreated in the game and appear in the accompanying live action episodes. It’s as cool as it is bizarre. Anyway, more on that later. The big take home for Quantum Break is that Remedy hasn’t forgotten how to make cool action games, and this time around you can do technologically-questionable time manipulation moves.

Jack, for reasons I don’t think are explained other than a vague line about using a gun when he was younger, is good with guns. Quantum Break features all the guns you’d expect, and they feel pretty meaty when you fire into one of the many goons working for Paul’s Monarch Solutions. Remedy can be relied on when it comes to gunplay, and no missteps have been taken here. Bolted on top of the gunplay, like an augmented reality headset designed by Doc Brown, are the time powers. It’s with these that the really cool shit happens.

Walk into a room full of Monarch mercenaries and you’re either going to want to take cover (which can be destroyed) or go on the attack by using a combination of powers. Time dodge to get behind foes and then go straight into slow motion, making soldiers easy targets; throw a time bubble around enemies, letting you pump the area with lead and cause a devastating blast once time recovers; or slow everything down and run into a group of grunts before opening a time shield that protects you while also doubling as a neat melee attack, throwing the trained heavies back. If none of those sound cool enough, why not throw a time bomb onto a tank, shoot it full of bullets, then sit back as it explodes sending time ripples across the room. Very cool.

Combat in Quantum Break is excellent: the range of enemies is great (about mid way through the game introduces more advanced units who can control time themselves), and the mixture of deadly weaponry combined with time manipulation is handled brilliantly. But you can’t slow motion dive. I can understand Remedy not wanting Quantum Break to be compared to Max Payne, but its absence in a game in which the move could actually be reasonably explained borders on madness. The temporal powers we do get to play with are neat, but at times (such as when Jack is on a platform above his pursuers) you’ll wish you could dive out and pick off enemies shootdodge style.

Although not as prevalent as combat, Quantum Break includes a decent chunk of platforming gameplay. It’s pretty basic, consisting mostly of running and jumping onto platforms, but time manipulation comes into play too. You have to do stuff like freeze a platform in place before it falls, and rewind time in a scene to allow safe passage over a conveniently placed cannon. It’s not quite Blinx: The Time Sweeper level, but it’s pretty cool and breaks up the action.

Remedy always manages to make games with a distinct look, and Quantum Break is no different. With more effects on display than a fancy Photoshop of a faked NX controller, superb lighting and tons of environment detail, there’s no question that the game is a benchmark other Xbox One devs should aim for. Comb over every scene and you’ll notice blemishes (shadow pop-in, texture loading, an occasionally iffy frame rate), and if you’re a 1080p purist you’ll likely baulk at what Remedy has conjured up, but step out of the internet hate mob and you’ll see a game that’s as exciting to look at as it is to play.

Quantum Break’s excellent visuals make the developer’s decision to create a movie’s worth of live action scenes all the more baffling. There’s a mini TV show following each act, clocking in at around 20 mins. They’re used to tell the story of Monarch and show how your in-game choices affect the plot. To be blunt, these episodes are not high quality TV, but they are bizarrely watchable when they’re not being bogged down by dull character interactions. It’s a shame they have the appearance of a high quality fanfilm made for YouTube, with some awful effects work, which results in the most obvious question: why didn’t Remedy just use in-engine cutscenes? The TV show angle is a neat idea, especially when you can talk to others about how certain events played out, but ultimately one that doesn’t have the impact it could have had with slightly better production.

Quantum Break, then, is far from bulletproof. It’s a game that is over fairly quickly, it misses a trick in combat because Remedy didn’t pillage its most famous creation, and it features live action scenes that are best described as enjoyable nonsense. Yet it is just that, enjoyable. Really, really enjoyable once you get to grips with all the powers at your disposal (and level them up). Quantum Break is a glorious use of current-gen power, with the visual fireworks on show making the combat feel positively joyous. As thoroughly entertaining as the whole package is, Quantum Break feels like it managed to reach only 80 per cent of Remedy’s potential. If only the technology existed to go back in time to change some design docs.