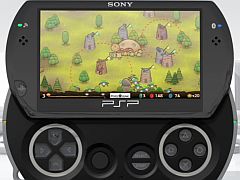 Kids build forts; it’s just something they like to do. Grab any old thing and put it on top of something else until you’ve got a big enough structure to hide in and you’ve got hours of fun. As an adult you don’t really get to build forts though, unless you happen to be playing PixelJunk Monsters, the PlayStation 3 strategy game for the PlayStation Network that’s now been ported across to the PSP. Here you build fortified weapons out of trees – and then you dance inside them.

The premise of PixelJunk Monsters is incredibly simple. You play as the defender of the forest and it’s your job to protect the innocent people back at base. The problem is that there’s always a horde of monsters coming your way (10 waves per level to be exact), keen to get their evil hands (or teeth) on the cute little guys. For whatever reason you’re useless as far as being an attacking force, but you can construct weapons atop towers.

At the start of each level (all fights are fought on a single game screen so there’s no scrolling) you’re given a certain number of coins and left to get on with the job at hand. The coins are used to build weapon towers, knocking down a tree in the process, and the incoming threat is shown at the bottom of the screen, so you have an idea of what type of enemy is coming up next. And the type is vital in how you go about taking it down.

Early on you’ll be able to place basic arrow and cannon ball firing weapons, able to take down the ground units with relative ease, wandering round and picking up the dropped coins and gems like you’re strolling through the park on a sunny Sunday afternoon. You use the collected coins to build more weapons and use the gems to upgrade those weapons and everything seems great. All your little guys are safe back at base and life couldn’t be better. But then a wave of air-based enemies turn up.

PixelJunk Monsters is all about being prepared, and as much as this element keeps you on your toes it’s also the cause of many problems. Even if you’ve managed to look ahead and build some air defence weapons, you don’t know for sure which route through the map the enemies will take. While you can run around dismantling weapons and building new ones, if you’ve got to race the enemies across the map and build something in order to fend them off, chances are that a good number of innocent little guys waiting at base will be lost.

In the first few levels you’ll find that you can swamp enemies with the most basic of weapons and you’ll get the victory, and you’ll even find time to dance inside the base of the weapons to give them upgrades – a bizarre act indeed but one that saves you gems if you’ve got the time. Towards the end you’ll really be struggling. More often than not you’ll have to replay each level a handful of times in order to work out the best way to tackle the enemies. While this isn’t a massive problem it might become grating for players used to strolling through games without having to think much about what’s going on.

This is where the game’s included two-player co-op comes into play, allowing you more time to focus on certain areas of defence building while your mate handles the other end of the map. On your own it’s all too easy to get caught out while you’re frantically running around the map picking up coins, only to miss the line of nasties strolling right through the middle of the map. This is playable locally with a friend with another PSP or over the internet, although the lack of game sharing for what is a fairly simple game is disappointing.

PixelJunk Monsters on the PSP isn’t just a straight port of the PS3 original, as it packs in a lot more content than the home console game. All the extra content released for the PS3 game is included, plus there’s a completely new island that features around 45 new stages. Considering most of these will take upwards of 10 minutes to complete, this is a considerable chunk of game that more than justifies ‘Deluxe’ being slapped onto the title. There are also a handful of new towers, including a very handy one that upgrades others for you, meaning you don’t need to spend time dancing in front of them yourself.

Visually the game isn’t going to blow anyone away, but it makes the most of its simple appearance and works really well on the PSP’s small screen. The colourful hand-drawn-like visuals look great and bring back memories of the most beautiful games of the 16-Bit era. The music is pretty twee, but perfectly fitting, and the whole package screams of being made with a lot of love and attention.

In the end it all comes down to how you want to play the game. On one hand you’ve got a fiendishly hard single-player game that taxes the mind as much as the reflexes, and on the other there’s a more considered two-player game with a slower pace and more tactical play. Either way, PixelJunk Monsters Deluxe is a great fit for the PSP, an ideal portable game, and well worth picking up.

PixelJunk Monsters Deluxe is a great fit for the PSP, an ideal portable game, and well worth picking up.
8 Great multiplayer options Simple to pick up Deceptively deep Will get repetitive for some