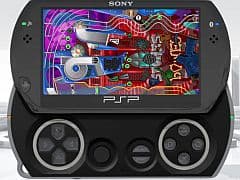 If you owned a Commodore Amiga, which you undoubtedly did because you’re hardcore, then you probably played Pinball Fantasies, the 1992 pinball game from Battlefield dev DICE.

Now, a whopping 17 years later, the game’s been ported to the PSP by Finland-based developer Cowboy Rodeo as a cheap as chips PSP Minis game. And anyone with even a vague interest in pinball, or just retro fun, should give it a shot.

Fans will be happy to know that it’s a near perfect port, and an impressive one to boot. The new menu screen, which represents the four playable tables as old school floppy disks (that’s what games used to come on, for our younger readers), delights. The wonderful 16-bit music is just as catchy. The ball and flipper physics, complete with a tilt, work brilliantly and stand as a testament to the enduring quality of the original game. And the four tables – Partyland, Speed Devils, Billion Dollar Gameshow and Stones and Bones – have all been recreated without a tweak in sight, which is good, because they didn’t need one.

On the PSPgo, you can close the handheld and use the L and R buttons to control the flippers instead of the Square and Circle buttons, which is great for on the go gaming. However, the PSPgo’s design causes a problem. You’re able to rotate the screen, changing the view from the default landscape, which includes thick black borders on the left and right of the screen, to a screen-filling portrait view. On the PSPgo playing the game in portrait feels unnatural and uncomfortable, because the controls are to the left of the screen rather than below it. On the bog standard PSP models this isn’t an issue, because the face buttons are set underneath the screen when you rotate the handheld. Given the portrait view gives you a more pinball machine-like perspective to play with, it might be preferable to get the game for a pre-PSPgo PSP, if you have the choice.

Bar this niggle, Pinball Fantasies on PSP is as good as it possibly could be. At £3.99 it’s definitely worth a download if you’re after a commute killer. Hell, at that price, it’s worth a download just for nostalgia’s sake.

At £3.99 it's definitely worth a download if you're after a commute killer.
9 Eye-catching 16-bit graphics Incredibly addictive Retro music Portait mode fiddly with PSPgo