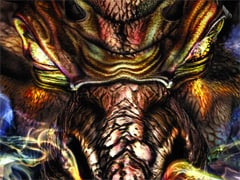 Sometimes you just fancy an easy ride – something that doesn’t require much concentration, won’t last too long and has simple gameplay. In many ways, that’s what handheld gaming should be all about. And in this, Orcs & Elves, the DS port of the mobile only turn-based fantasy game (what else could it be with a name like that?) excels.

There’s a very good reason why the screenshots bring to mind old 3D first-person-shooter games – the original mobile Orcs & Elves was made by John Carmack, id Software’s co-founder, and the man responsible for classic FPS Doom. But that’s where the similarities end. The game centres on trawling through various levels of a giant dungeon, which is actually a Dwarven city built into a mountain.

Make no mistake, this is a turn-based RPG in every sense of the term, with levelling up, stat boosting potions, attribute augmenting armour and spectacular spells. Indeed, you move about the game world one tile at a time, as do the monsters you face, and your attack speed is dependent on your character’s levels. However, it feels more like playing a really basic, stop start version of Elder Scrolls IV: Oblivion, with swords slicing monsters whenever they get close and a talking wand called Ellon that chucks out magical balls of energy, all from a first-person perspective.

While the combat might at first feel simple and, as a result, repetitive, it’s got surprising depth. As with most RPGs, what drives you on is the desire to get new, cooler weapons and equipment and then try them out. While Orcs & Elves’ graphics aren’t the best on the handheld, if you’re in to fantasy in general, you will get that cool factor from some of the game’s best loot.

What is a little disappointing is that the game doesn’t use the stylus to any great effect. You can use it to control everything from the bottom screen, including movement and attacking, but doing so feels like using chopsticks while wearing boxing gloves. It’s much better to use the d-pad to move, attack with A and change weapons with X. But you can use your thumb with the touch screen to access other things. Your toolbelt, or inventory, is open at all times so you can quickly use potions when your health is low, open your map and repair armour on the fly. Being able to quickly navigate an always open menu with your thumb is pretty useful and, surprisingly intuitive. Developers take note.

The game is pretty short – it shouldn’t take more than six hours to complete. I’d say that this is about right, because the gameplay simply doesn’t justify an epic campaign. But others might feel short changed, especially if they really engage with the game and are having loads of fun.

There are some really nice touches hidden away in there too that will make you smirk. Your talking wand, Ellon, is a wise-cracking sidekick you’ll come to love. The giant red dragon who sells you items and equipment has a mood meter, and will get pretty snotty the longer you bother her. Some of the item descriptions are funny too. Elven Ale is “for the carb conscious drinker”, and Dwarven Ale is described as “Dark Stout ale with a kick!” And yes, you can get drunk.

Orcs & Elves is no revolution. It’s Western role-playing the way it used to be – hidden passages, mountains of gold, dead dwarves and a temperamental dragon. It’s perfect fodder for the geek in you, and a half-an-hour train ride, but don’t expect it to rock your world.

Orcs & Elves is perfect fodder for the geek in you, and a half-an-hour train ride, but don't expect it to rock your world.
7 Good use of the touch screen Classic Western role-playing Graphics and sound limited Quite short