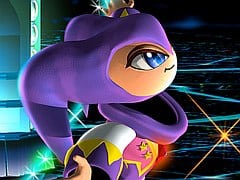 It’s called NiGHTS Into Dreams HD but, really, this is a port of a 16-year-old Saturn game, a console which featured less 3D capabilities than the original PlayStation. A modern resolution and sharper textures does very little to stop this feeling incredibly old.

But that’s okay, really – I think we’re all mature enough to know a few jagged textures is part of the parcel when you boot up a game made in 1996. And, hey, NiGHTS has such a rich and unique history – it was Sonic Team’s first attempt to properly break free from the chains of their blue overlord’s dominance of the early 90s, and their début Saturn title saw the light of the day in a hugely transformative period of gaming led by Nintendo’s unmistakably iconic Super Mario 64. Left free to create well, pretty much whatever they wanted, Sonic Team conjured up an eccentric title that was daring, delightful and completely unique.

And, really, if you’re going to take one thing away from NiGHTS it should be this: it really is a once-in-a-lifetime kind of a game. You just need to look at the mucky Wii sequel to see that we’ll never see it properly realised ever again. Personally, NiGHTS has always held a certain power over me – I was a SEGA aficionado who abandoned the Saturn for a PlayStation but always wanted to pick up the purple jester and his proto-Dreamcast analog pad, and finally managed to play it for the first in the mid-noughties after picking up the hardware from a car boot sale.

If you’re going to take two things away from NiGHTS, it is the above and this: it has an absolutely wonderful soundtrack.

The meat of NiGHTS takes place in flight, gobbling up blue orbs as the androgynous title character (a rogue nightmare nasty, though this doesn’t really matter) that two children – Claris and Elliot – transform into at the start of each of the game’s seven levels. Your route through of these 3D levels is fixed, and the trick is in soaring around each stage four times within a time limit, bringing a particular captured orb back to the start line and progressing to the next lap, which takes a slightly different path. It feels like a mix of SEGA’s arcade racers – complete with arcade-era mechanics like Time Extends – and a platformer, with a game more interested in an elegant loop-de-loops rather than jumping over ever-shrinking obstacles and bopping people on the noggins.

It’s a curious but unique experience, mixed together with an incredible soundtrack and the inescapable appeal of unearthing a delicate novelty. But it’s not a friendly one: the game makes absolutely zero effort to explain what’s actually going on in the dreamland of Nightopia, so your initial few playthroughs will be mired with confusion and inevitable failure. NiGHTS was released in a time when game manuals were still useful, but even then (and, trust me, I’ve read it) it was a game particularly loathe to explain itself.

Get over that confusion, though, and NiGHTS becomes invigorating. This spangly new HD version offers you a choice between a ‘Brand New Dreams’ mode and the Saturn original, with the former a slightly HD-ified version of the 2008 PlayStation 2 port of the Saturn original, which only ever saw the light of day in Japan. It’s probably the best way to play now, despite a slightly ham-fisted attempt to make the game run in 16:9.

There’s just nothing else quite like it. NiGHTS HD doesn’t transition as elegantly into 2012 as it deserves, then, but it’s clear this 16-year-old cult classic still knows how to soar.

There's just nothing else quite like NiGHTS.
8 Great soundtrack A cult classic Difficult to get into Shows its age in places