If you want to instil your combat with a tincture of gentlemanly élan, a true turn-based battle system will do the trick. Watch as hero and foe, locked in a lethal bind, do the decent thing and allow each other time to strike. Between moves, they may breathe and seethe, like embittered chess players, but that is all. Fists and swords will fly, blood will be spilled, but no blow shall be struck to honour. Call it fire under grace. When you transpose this courteous cage onto the world of Monster Hunter, however, where manners are no good to man nor beast, you end up with a stranger spectacle. Lizards as large as barns, covered in scalding-red scales, politely obliging your whim to dither—indeed, dithering themselves: weighing up, perhaps, whether to spill your intestines, crunch you into paste, or steam you en papillote.

In Monster Hunter Stories 2: Wings of Ruin, it lends the entire affair the air not quite of artifice but of cultivation, putting the monsters on an even footing with the humans. This strikes me as just. To be honest, it’s the humans that could use the cultivating; the monsters aren’t the ones heading endlessly out, driven by the hunch that the ingredients for a great jacket may lurk and howl beyond the next clearing. In any case, Wings of Ruin casts you not as a hunter but as a rider. The difference? A rider, too, heads endlessly out, but he is driven on the hunch of the very thing that does the howling. Your quest is still to do battle with a menagerie of wild creatures, only you do so with the help of other creatures, who have had the wild warmly, but firmly, trained out of them. 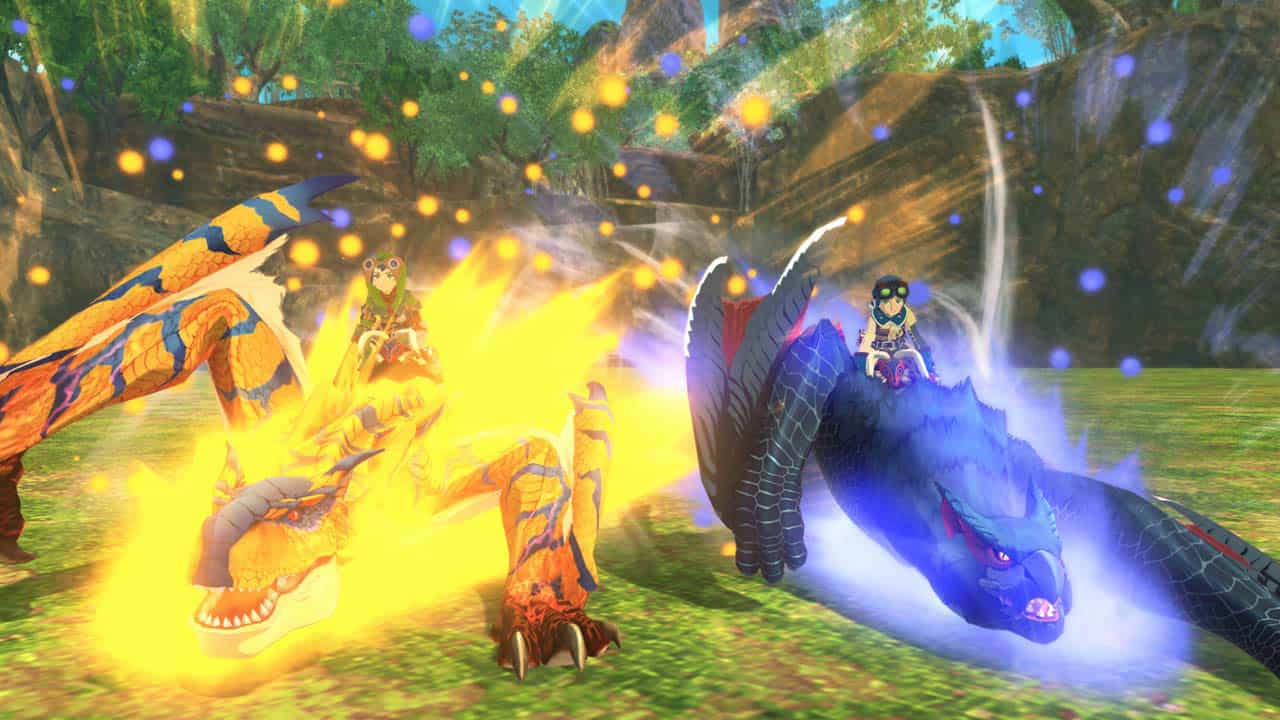 The obvious comparison is to Pokémon. It’s there in the battles, wherein you switch between a clutch of beasts, each vested with powers of violent application; in the open hub environments, where the monster assigned to the top slot will scamper by your side and, even better, provide speedy transportation; and in the eggs that you collect and hatch—right down to the dramatic shake and crack of the shell, as the beastlet emerges from a burst of light. Unfortunately, it’s also there in the character of Navirou, a Meowthalike talking cat. He lacks Meowth’s New Yawk squawk but makes up for it in awful—or, as he would say, “clawful”—puns. Navirou was clearly cooked up as comic relief, but relief from what? The plot of Wings of Ruin is hardly heavy stuff.

You play as a silent (and customisable) hero, who must tend to a lone egg. The occupant of the egg, once hatched, is prone to sowing destruction throughout the land, unless shown the proper parental care. Much nuzzling and positive reinforcement are required, because, once it is fully grown, there is no grounding it; it is a Rathalos, a blend of dragon and drama queen, who, so the story goes, could wreck an entire town with a single beat of its wings—hence the title. Your quest spirits you from place to place, in the footsteps of your grandfather. He was a rider, too, who forged a bond with his Rathalos that people still speak of. The mighty pair saved folks from harm, mopped up the ominous red light that leaks through the air wherever trouble looms, whisked cats from trees, and probably organised a community litter picking drive.

As was the case with Yakuza: Like a Dragon, (whose name bore a similar snarl) Wings of Ruin offers us not just a new, turn-based combat system but a curious vantage from which to consider the series. As it happened, the zest and pleasure of Yakuza had far less to do with its rococo physicality than with its fevered embrace of video game unreality—which was only burnished by breaking the flow of its action. This is not true of Monster Hunter, which is happy to take after our new hero and keep quiet—to not to be about anything but the felling of monsters, and fair enough. The series thrives on the length and spirit-testing attrition of its clashes; you come out of them heavy with loot but lighter in your chest, and the more opaque aspects of its design you learn through failure and frustration—a baptism of ire.

Compare Wings of Ruin, in which, amidst the storm of a long standoff, I am free to pause for leisurely sips of coffee and to weigh up my options. Gone is the pulse-quickening thrill of a last-second dodge, and the edgy delirium of whetting my blade while something bounds hungrily towards me. In contrast, Wings of Ruin is like decaf. And yet, it also happens to be a joy, one of the most satisfying combat systems I’ve played in recent memory. Your moves are underpinned by a rock-paper-scissors approach: power beats technical, technical beats speed, speed beats power. Thus you try to second-guess your enemies, so as to nullify their attack while doling out damage of your own. Your monsters, meanwhile, lunge as they please, but you can attempt to sync your strategies: matching power with power, for example, and rocking an opponent by slicing in from both sides. 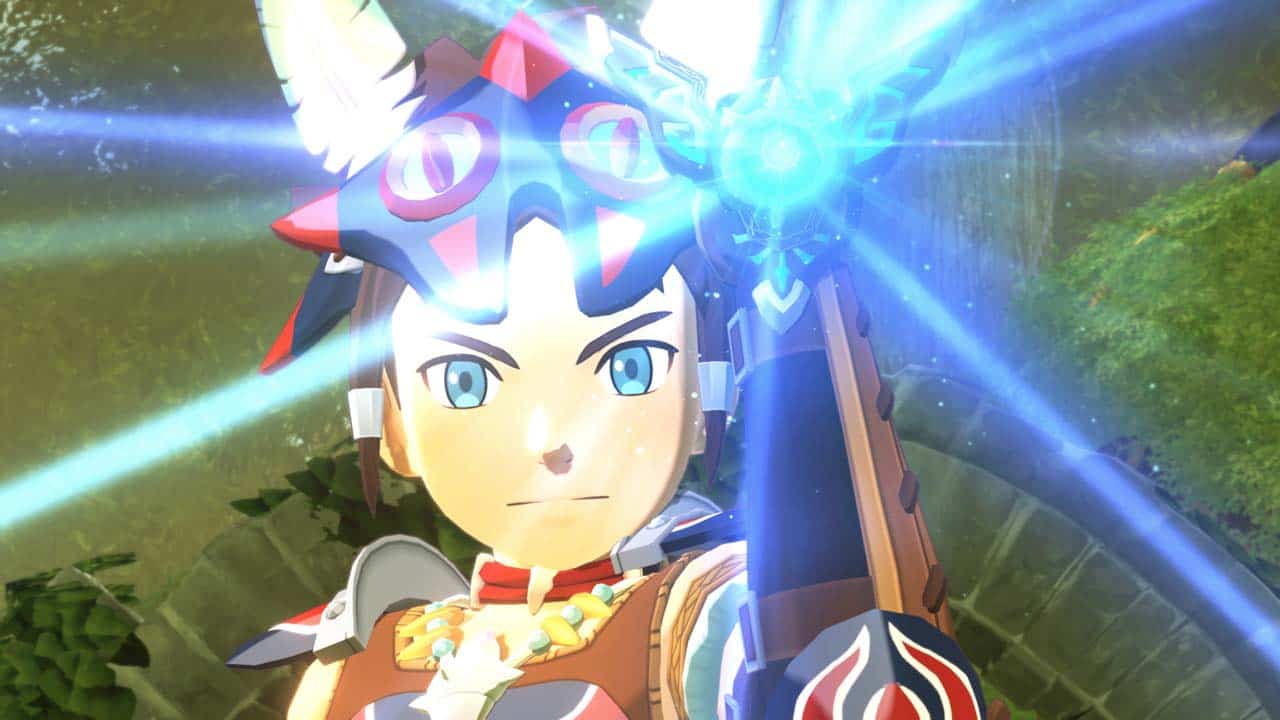 If you’ve been drawn to the idea of these games but flinched at the prospect of a gruelling gauntlet, of swallowing a preemptive aspirin and plunging yourself into the encyclopedia of their systems, then Wings of Ruin might be for you. The sensible structure of its combat is headache-free, and, while not an easy game—especially in some of the later clashes—it presents the narrow charm of the series in a smooth, wide-reaching way.

On top of that, it brightens up the earthy brew of Monster Hunter Rise with a cel-shaded art style, by Takahiro Kawano, who returns from Monster Hunter Stories. Having come away from Rise with the conviction that anything else heading to Switch this year would, in terms of graphics and visual flair, constitute a fall, I now stand corrected. Part of the appeal is in seeing familiar designs re-dipped in dazzling paint. Take the Kulu-Ya-Ku, for instance, my memory of which, from Rise, is of a dusty mixture of dodo and velociraptor; here it has been given a lick of light beige, a black-tipped beak, and plumage as high and hotly orange as a freshly stoked fire. Elsewhere, our good friend Arzuros, I am pleased to say, has had his highlights touched up to a murderous yellow, and the green of his pelt shampooed to a grassy finish.

This might be how best to view the new game: as a trip to the salon, trimming back the matted systems of the main entries, colouring and conditioning their world, and presenting us with the prettily coiffed, if unrepresentative, result. I wonder how many people will hop from this to Rise, and how many will hang on to that game after the jump, as it bucks and jolts them to the floor. Then again, it matters not. Wings of Ruin may not make a hardened hunter of you, but nor does it want to. It would rather bring you along for its own wondrous ride.

Wings of Ruin may not make a hardened hunter of you, but nor does it want to. It would rather bring you along for its own wondrous ride.
8 Combat Art style Navirou