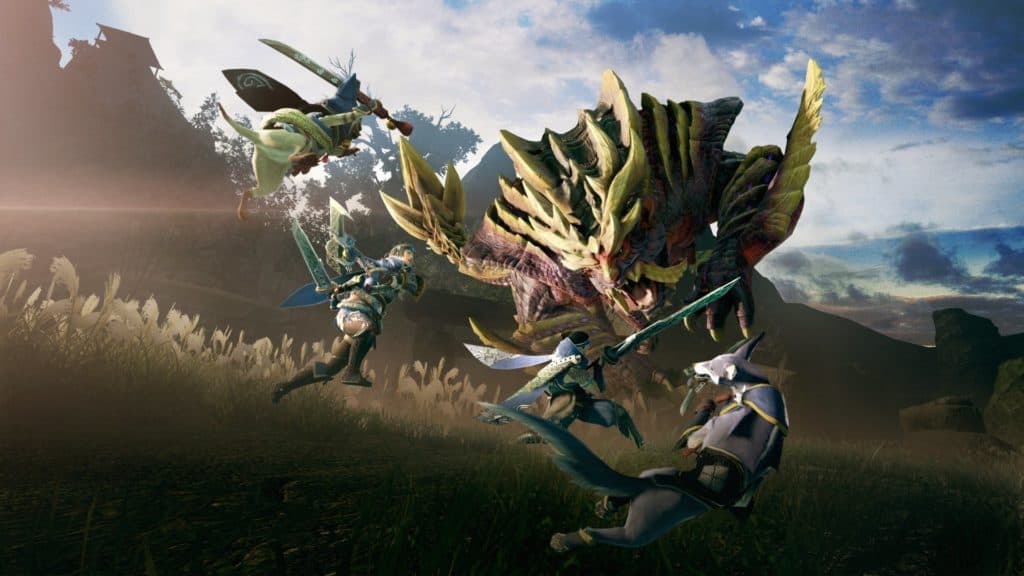 When it comes to hunting monsters, there are two main schools of philosophy. One is the Elegiac, where beasts the size of bus terminals are felled and mourned, amidst a spray of dark blood, as a share of majesty leaks from the world and the role of the “hero” is called into question. This approach is epitomised by Shadow of the Colossus, whose creator, Fumito Ueda, forges games by cutting things out of them—an ethos he has called “design by subtraction.” The other is what we might call the Ecstatic, exemplified by Monster Hunter, which serves up similarly grand battles but sees no reason to bog them down with reflection. Who needs sorrow, after all, when you can fashion a pair of plush boots and a fur coat from the hide of your fallen quarry?

The latest in the series, Monster Hunter Rise, continues this proud tradition. You play as a hunter (of your own creation), who lives in the village of Kamura: a pleasant rural den of puffing chimneys, thatched roofs, and streams of coiling blue. It’s presided over by Elder Fugen, which sounds to me like something you might brew to relieve constipation, but is in fact an older gentleman with a distinguished explosion of grey hair. “Kamura is more… than steel and hunters,” he says. But, honestly, looking around, it isn’t much more. The blacksmith, the merchant, a lady whose job title is “Quest Maiden,” even the local chef: all bustle merrily toward the shared goal of bringing down the region’s ravening fauna. Chief ravener amongst them is Magnamalo, an armour-plated purple tiger, wreathed in radioactively bright fumes, that could happily occupy a bit part in a Godzilla movie, chomping at the big guy’s knees. 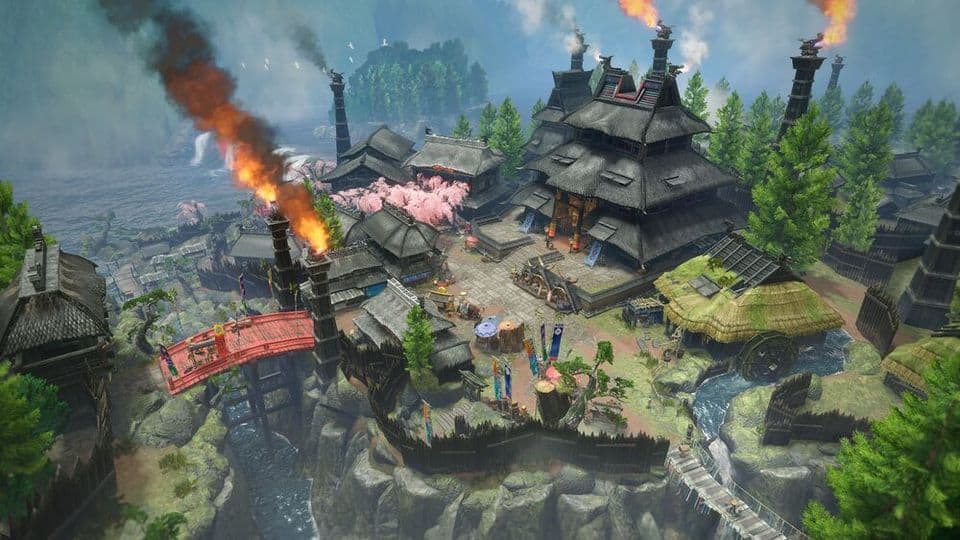 We are told that, fifty years back, Magnamalo, along with a whipped-up retinue of his fellow-monsters—a horde-like phenomenon referred to as a “Rampage”—laid siege to Kamura; and that it now falls to the hunters, as is their wont, to prune back the forces of fang and claw and protect the place. Before that, however, preparation must be done. Fans of the series have long grown accustomed to its systems, dense and thorny as bramble, while newcomers, hacking away in search of fun, tend to get covered in scratches. The inventories are crammed with items and gear. There are chestfuls of smithable weapons and wardrobes bulging with armour. There are critters to ensnare and meals to eat. The menus teem with options, and the tutorials are like seminars. On and on it piles—a proud example of design by addition.

I have been put off Monster Hunter games in the past, reeling cross-eyed from the crucible of their opening hours. Where Rise succeeds—just as Monster Hunter World did, before it—is in wedding its complexity to a mixture of the silly and the dreamlike. When one character approaches Elder Fugen and, with troubling alacrity, says, “I’ve informed the village of the coming Rampage, like you asked,” you can’t help laughing; but so, too, do you register the cheerful rhythm of Kamura’s days, which swings with Disneyish gusto. The streets are peopled not only with people but with bipedal pun-spouting cats. “Meowllo there,” one of them (a postman, apparently) says, before proffering some information he deems “parameownt.” At moments like this, the line between groan and smirk is whisker-thin—and for each player to judge—but the spell of the game’s fantasy is cast nonetheless. And it’s difficult not to be bowled over, as you watch a feline chef and his staff caper through a culinary ritual of song, the unlikely result of which is a dessert that may bestow combat advantages on your next quest. 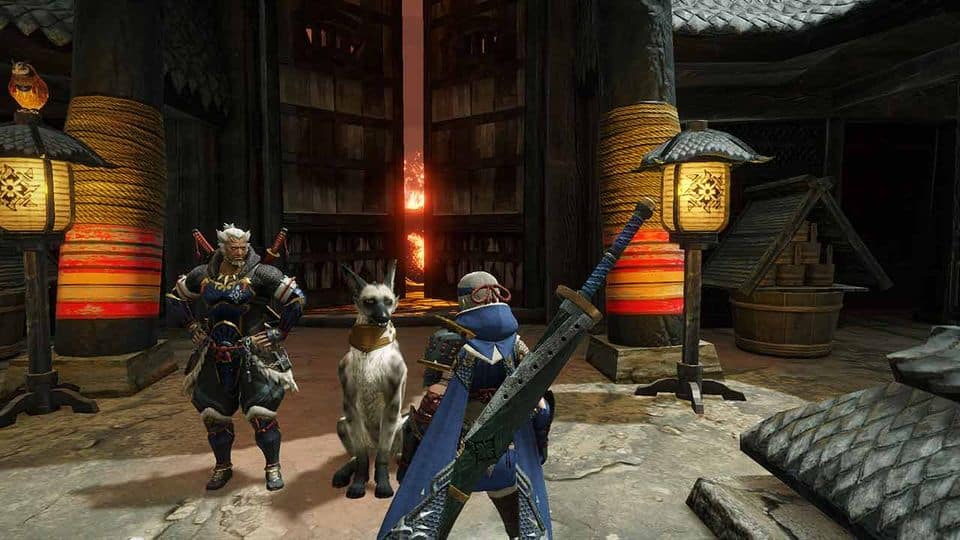 The upshot of this surreal atmosphere is that you wind up surrendering, without noticing, to its grip. At around the five-hour mark, I was happily pottering about, slipping into a routine of trips to the cat-cooks, back across town to the merchant for supplies, over to the blacksmith for upgrades, and thence to the Quest Maiden—a courteous elven lady, wrapped in red-and-gold finery, called Hinoa. It’s here that Rise seizes you in the tight loop of its play: Hinoa offers you a handful of missions, each to be accepted with a satisfying red stamp, that have you sallying forth in search of action.

I have to say, there isn’t actually much hunting in Monster Hunter Rise. You alight in an open hub, wherein you race to the question mark pinned to your mini-map, draw your weapon of choice, and go to work. What we do get is theatre. The loading screens have the look of parchment paper, like an unfurling scroll, onto which is inked scenes of conflict—with Ōkami-style swishes of black. Your prey is introduced, at the start of each quest, with a grainy cutscene and, of all things, a rhyme—a lyrical warning of the dangers that lie in wait, with the feel of a local fable. “A lullaby is sung / Soft sounds of seduction / Its dulcet tones inducing sleep / And serpentine destruction.” Such are the cautionary couplets that precede your showdown with the Somnacanth: an amphibious creature, shanking through the shallow waters of a cave, with billowing lavender-coloured fins, like a bridal veil, that scatter a sleep-inducing dust. You snooze, you lose. 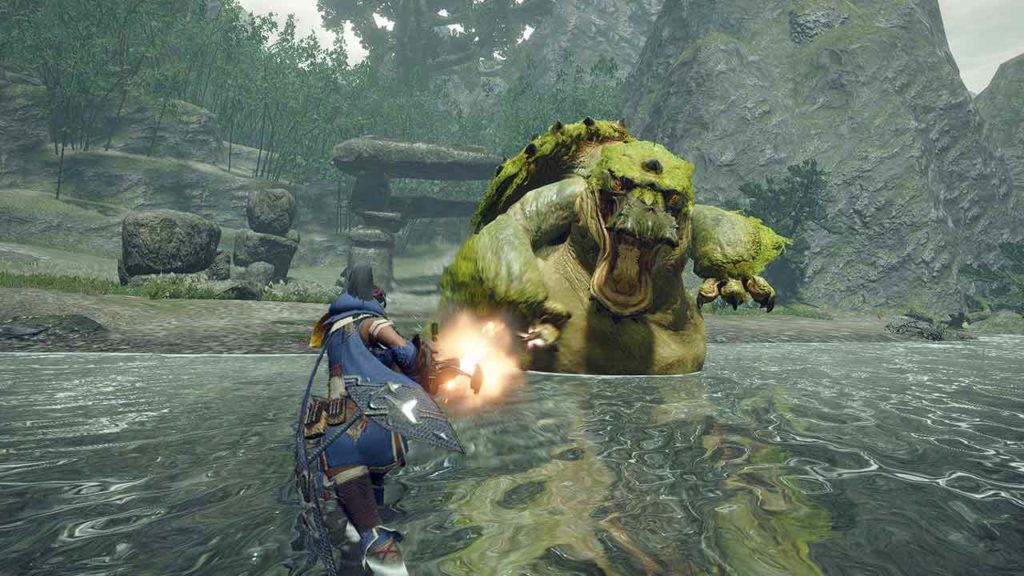 My contretemps with the Somnacanth lasted half an hour, and it is length, not difficulty, that defines the allure of these clashes. They’re no fun to watch; from a distance, they resemble softcore Dark Souls—all cathedral-size monstrosities versus armour-clad strivers—with numbers scattering in the wake of every strike. When you’re in the thick of it, though, its distinctive tug-of-war appeal exerts its pull. Your foes, when sufficiently walloped, will limp off in haste to recuperate; now is the time to whet your blade (which dulls with every blow), lick your own wounds, and give chase. Rise brings with it a couple of new methods to do so. There is your Palamute, a large, bloodthirsty hound that can be hailed, like a taxi, and ridden wherever you like—hopping up sheer cliffs, if they’re short enough. Best of all, you have the Wirebug, an insect crossed with a grappling hook, whose glowing threads hoist you onto surfaces like Spider-Man’s clanking cousin.

Personally, my favourite application of the Wirebug isn’t traversal; it’s entangling your enemy with chords of sticky silk, and mounting them like very angry horses. Your hunter tugs at the strings like a puppeteer, lashing the poor thing into battle. Thus, coaxing one behemoth into the angry path of another, in the hope that they slug it out—just as Kong clobbered his Jurassic rivals—becomes a thrill. The loser gets leapt on and yanked back into the fray. This jockeying art isn’t all that different, I would wager, to the challenge that awaits the studio behind the game, whose restless will to zap and freshen the formula, while keeping on top of those who would rage the fiercest, should the balance be lost, is impressive. 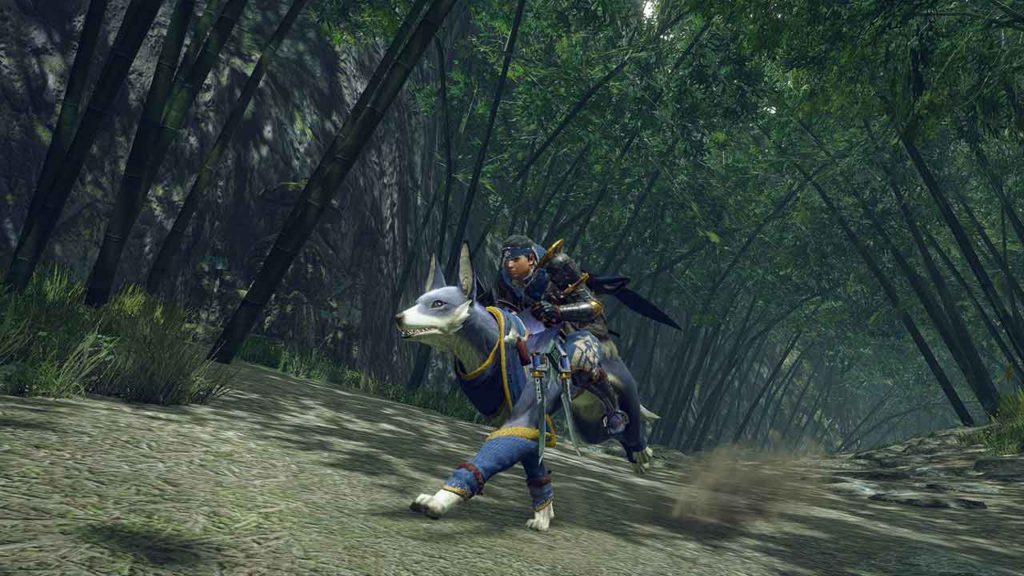 The developer is Capcom, and the game—which arrives exclusively on the Nintendo Switch—is powered by the RE Engine. Owing to the limits of the hardware, you won’t find anything here to match, say, Resident Evil 3, with its richly suppurating fidelity, but the art direction (always more important than pure muscle) wins the day. Part of the fun is gawping at the elements, from snow-powdered rock to broiling sand, and then returning to Kamura, after a successful hunt, and drinking in its explosive colour—the drooping pinks of its cherry blossoms, the peeling red of its main bridge. And what a feast to hold in the hands. After Monster Hunter World, which released for consoles and PC and quickly became Capcom’s best selling game—thumping the thirty-year-old Street Fighter II from the top spot—the decision to bring out the next big game for the Switch may seem a strange one. But the series has always flourished on a handheld; it wasn’t until Monster Hunter Freedom, on the PlayStation Portable, that the series took flight in Japan. I played Rise on a Switch Lite, and there is a toyish joy in gripping its treasures and jamming them into a carry case.

The question is: Is all this enough? My criticism of the new game is no different to that of its predecessors: that the underlying systems, many of them unexplained, are bewildering. True appreciation of its complexity requires research—much of it on the internet, where the knowledge of fans has accreted, like stalagmites, over the course of many games. As such, plumping for a new Monster Hunter can feel like buying a car and being asked to bone up on the history of the horseless carriage. The answer, for Monster Hunter Rise, is “Yes.” There is enough fun available for those who are happy to muddle through, and the winning combination of Wirebug and Palamute adds enough zip to each fight that you can swing over much of its more intricate baggage. Whether that counts for or against the game, I still haven’t decided; fortunately, no small measure of its power lies outside the combat, patrolling the glittering plains, and down in Kamura, amid the cats. It’s more than steel and hunters.

It’s difficult not to be bowled over as you watch a feline chef and his staff caper through a culinary ritual of song.
8 Combat and traversal Cats Visuals Bewildering density