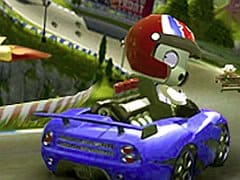 There’s no question that Sony covers all the bases when it comes to its first-party output. It no doubt saw the success of Mario Kart on Nintendo platforms and wanted some of that money pie, throwing its resources behind the development of ModNation Racers for PlayStation 3. Despite missing the charm and character found in Nintendo’s series, ModNation was a perfectly competent kart racer complete with genre-leading user creation tools. A disappointing PSP entry followed, but now on Vita the series has a chance to shine, taking full advantage of the handheld’s features.

Compared to the rather bloated original ModNation Racers, Road Trip on Vita is more streamlined. Gone is the horrid attempt at story telling via cutscenes, gone is the awkward drivable hub world, replaced with a simple scrollable menu that is home to plenty of content and options.

The Career Mode is the heart of the single-player portion of Road Trip, offering up five sets of five races (each on a new track), with the next unlocking once you’ve reached the set points goal. An extra sixth set of races is unlocked once you’ve won the previous five and managed to beat a set of overall objectives. It’s a decent roster of courses that comes close to the 32 found in Mario Kart 7 in terms of number, but the overall level of quality isn’t as high, with many being entirely forgettable.

Tracks are only one side of the equation, though, with the actual karting being just as important – something that severely let down the PSP entry in ModNation series. If you’ve played the PlayStation 3 game you’ll jump right into the driver’s seat in this Vita edition, but for newcomers there’s more to learn here than in your average kart racer – in fact there’s barely a button on the handheld that isn’t used.

Whereas in Mario Kart you only really need to worry about accelerating, braking, powersliding and using a weapon, here you’ve got all that as well as a button to activate your shield, a turbo, mid-air spins mapped to the right stick, a sideswipe move activated by flicking the right stick, the ability to fire at triggers to activate objects and shortcuts, and you can even absorb weapons to convert them into boost/shield energy.

The complexity of it all doesn’t end there, either, with each weapon being offered in three increasingly more powerful flavours. Collect one weapon pick-up and you’ll be able to fire off the most basic version, but wait until you’ve got three and you can unleash a much more devastating attack that can radically improve your position in a race.

Thankfully the driving model feels much closer to the PlayStation 3 original than to the overly sensitive and weightless PSP game, meaning the karts have a great sense of grip despite their ability to slide. Unfortunately the good work done by the dev team on the handling is undone by what can only be described as an awful frame rate. At times the game chugs so much it’s akin to a rapidly moving slideshow in which you need to frantically try and remain in control of your vehicle.

This technical sloppiness is a shame as when Road Trip is at its best it can be heart-racing stuff. It’s the kind of game in which it’s possible to go from first to last place in under a second, but at the same time you can be the one performing miraculous comebacks. This isn’t an easy game as you enter the latter half of Career Mode’s stages, with victories being hard fought and rewarding – although by the final races I found myself cursing the rival AI racers an awful lot as I tried time and time again to place high on the podium.

Sadly there’s no online multiplayer here. Whether or not this is a massive oversight or simply a result of a rushed development (the aforementioned frame rate issues and lengthy load times would suggest the latter), there’s no excuse. Local multiplayer against people in the same room as you is supported, but in this day and age it’s simply not good enough – even the PSP version of ModNation offered online play.

Time trials are the game’s other time-sink, making use of PSN to offer global leaderboards and ghosts to race against – something that ever so slightly makes up for the lack of head to head online racing. Pure racing events that aren’t continually disrupted by weapon attacks show off the game’s impressive arcade-style driving model, and for many players solo driving will be preferable to the frenetic races.

Thankfully the creation aspect of ModNation Racers is present and correct here, complete with the absolutely essential ability to share content online, not only between Vita users but also PlayStation 3 ModNation players. What this means is that from day one the Vita game has an absolute tonne of user-created characters, karts and tracks, all easily downloadable from the in-game marketplace.

If you’re keen to make your own creations, Road Trip is even more accessible than its older brother on PlayStation 3. The use of the touch screen and rear touch pad to draw tracks and elevate the land is an excellent touch, while the customisation of characters and karts is a simple case of dragging your desired shapes and graphics from the menu onto the 3D model.

It would be foolish to say that everyone can create brilliant tracks, as the best shared online clearly took many hours and considerable skill to build, but the ability to knock something together in a few minutes is an achievement the dev team should be proud of. As a launch title these creation aspects could have been skimped on, but instead their inclusion sets the game apart from the swathe of other racers hitting the Vita at launch.

This isn’t Mario Kart, and for many people that automatically puts ModNation Racers at a huge disadvantage. While Sony’s Vita launch title doesn’t have that special something that makes people love Nintendo’s kart racer (years of history and a raft of recognisable characters), aside from a few large missteps (erratic frame rate, terrible load times, and missing online multiplayer) Road Trip generally does most things well. This is a typical launch title in many ways – by no means as good as it could have been, but a solid effort no doubt developed under the strictest of time restraints.

ModNation Racers: Road Trip is by no means as good as it could have been, but a solid effort no doubt developed under the strictest of time restraints.
6 Drifty handling is great Create and share tools are excellent Frame rate is terrible at times No online multiplayer