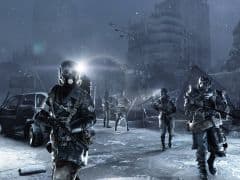 Metro Redux is a tweaked and enhanced compilation of Metro: 2033 and Metro: Last Light. VideoGamer reviewed both games on their original release, with our thoughts available here and here. This is a review of the complete package, presented to PS4, Xbox One, and PC gamers.

The Metro games were both lauded at the time for their technical accomplishments, on PC and the lesser-powered consoles. Brought into 1080p (less on Xbox One) with a smooth frame rate that looks locked at 60fps, there’s no question that the console games are head and shoulders above the Xbox 360/PS3 originals – on PC it’s harder to see the improvements so aside from some gameplay tweaks the package is less essential if you’ve already played the games on a high-end rig.

2033 certainly looks of its era, with animations and face tech appearing behind what we’re used to in 2014. The introduction of a new lighting system and many of the improved models from Last Light certainly gives it a more modern appearance, and various tweaks have been made to add more detail to the environments, but the game can’t match its sequel in terms of presentation.

4A’s follow-up started its journey to new consoles from a much stronger position, so while the PS4 and Xbox One games look far superior to the last-gen console editions, the PC original is very comparable – arguably still superior when running at an even higher resolution and with tessellation enabled. The end result is a game that certainly doesn’t look out of place on PS4 and Xbox One, although the distinctly last-gen face models stick out.

Presentation aside, 2033 has seen gameplay alterations to bring it more in line with the less frustrating Last Light, notably making the stealth sections easier and offering more ammo when played on Spartan mode. It’s also been given the interface introduced in Last Light and had numerous scenes altered for the better. Survival mode is available for both games, offering a similar play style to that of the original 2033, and all DLC for both titles has been included.

Console gamers will see big improvements in Redux compared to the originals, making this one of the best remakes we’ve seen. Despite improvements Metro 2033 can’t shake its slightly clunky roots and Last Light isn’t quite the game it had the potential to be. PC gamers could simply opt for the cheaper originals.

Both games completed on their original release. Redux tested for 4 hours.

Console gamers will see big improvements in Redux compared to the originals, making this one of the best remakes we’ve seen.
7 Nicely updated for PS4/Xbox One. Last Light holds up well. 2033 still feels a bit clunky. PC games won’t see many upgrades.