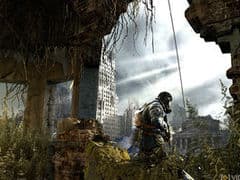 Metro Last Light is like a post-FPS shooter. It’s the game that takes place after Call of Duty and its ilk have ruined the Earth with their relentless need to blow shit up. Instead of bombastic, Hollywood action, Last Light is slower in pace and more atmospheric, and rather than just about terrorists and nuclear explosions, it tries to tell a more interesting story. Which is ironic, really, because you know, it’s all about nukes and stuff.

Just like Metro 2033, though, Last Light suffers from being overly clunky and it’s that which detracts from its unique ideas. Things have been improved, but only as much as expectations have risen in the last three years, and despite Last Light’s brilliantly realised setting and some great moments, it’s still heavily apparent when annoying issues rear their irradiated heads.

With you back as series protagonist Artyom, the story provides deeper insight into Metro’s conflicting factions. The crumbling remnants of the Soviets and the Nazi Fourth Reich are both at war, whilst the gruesome mutants mop up any sorry humans unfortunate to venture into the unsafe portions of the underground. Character motives are all over the shop and times are bleak; even more so than the original game, and Last Light does a decent job depicting some nasty themes, even if it occasionally ventures into crass gratuity. The jiggle physics cannot be unseen.

Most disappointingly, Last Light never quite succeeds in telling its own story, which is a real shame because its foundations are solid. Taking one of 2033’s two end choices as its canon – the one where you fired a load of super hot missiles to destroy the nest of the ominous Dark Ones, rendering them near extinct – Artyom has to find the lone Dark survivor, as well as uncovering the motives behind the warring factions in an attempt to stop humanity from wiping itself out.

It’s a compelling setup, and the journey through a hefty chunk of Metro’s world is excellent, but the game too often strays into overwrought and convoluted exposition, before clumsily swaggering back into vagueness, which leaves you wondering what’s going on if you’re not entirely invested in reading the game’s collectible diary entries. The game’s characters are decent enough, but you’re going to have a hard time making full sense of everything if you haven’t played the original game. Even with the knowledge of 2033 in your mind, though, Last Light’s plot stumbles.

That said, the game manages to still deliver a gripping experience – one that makes a welcome departure from high-fiving dude bros, crude dialogue and Americanised patriotism spewed from a smoking hole in the desert. The decrepit systems of metro tunnels that house Last Light’s campaign are eerily beautiful, but the game gives you much more to look at than just the dank interiors of a crumbling subway. Mutant infested swamps, plane wreckages and a lot more of Metro’s surface are on show here. The game’s pacing ebbs and flows naturally, progressing from tense claustrophobic firefights to more open battles, and extended peaceful periods through several of the game’s human inhabited safe havens. There’s no need to continuously bombard you with helicopter chases and huge explosions – although the game does slot in a neat chase here and there – and by giving the plot room to breathe, the adventure is really enjoyable.

Everything about Last Light, from the combat and guns, to the way you survive above and below ground, is entirely makeshift. Your flashlight needs manually charging after extended use, which provides tension when you’re battling off a handful of mutated scorpions in the dark and your trusty bulb is about to go flat. The same applies when you’re wearing your gas mask: your filters provide you with minutes of clean air, which can be switched for an extended duration, but should you use up your supply you’re essentially a dead man walking. Pneumatic guns even need pumping up in order to fire them, and special rounds are used as currency as well as ammo, so scavenging for any items will help you to customise your guns and keep your levels stocked up. All of it lends to a much more survival-based shooter, and it’s where Last Light gets the majority of its great identity.

Your guns are as equally rough and ready, with some interesting variants on standard weapons and ample options for customisation. Each weapon is fun to use, but there’s some weightless feedback that reminds you that this isn’t nearly as tightly tuned as other first-person shooters. Each gun sounds great, but that’s not conveyed through the controller. Machine guns rattle with age but don’t feel punchy, whilst the boom of a shotgun sounds incredible, and the feedback only just manages to make it feel satisfying in the hands. My go-to guns were the silenced shotgun and a badass silenced pistol. The shotgun allowed me to deliver swift death without much need for accuracy, whilst the pistol let me pick dudes off from a distance without setting off an alarm.

That said, Last Light’s stealth often works against you. Using the light sensor on your wrist, you’re able to tell whether you’re visible or not, but I was often detected when I was hidden from view, and most of the stealth attempts I made resulted in a full-on firefight. When it works, sneaking through tunnels, tactically taking out light sources and silently dropping goons is exhilarating, but more often than not the game’s inconsistency left me fighting on the back foot.

Thankfully, despite some AI issues, fighting human goons is great. The inimitable one-shot headshot clang more than makes up for the occasional dude running up to me without reacting, or enemies detecting me when I was entirely hidden from view. In one instance, one jabroni I found was attending to heal an injured comrade. I shot the guy helping, and the injured dude immediately yelled out to anyone in the vicinity that there was an intruder alert, so I quickly dropped him as well. A one-off event, but it made me feel like I was fighting a real threat.

On the other hand, fighting mutants is just a case of running backwards and desperately emptying clips, which is pretty dull. As you’re defenceless to melee attacks and the overwhelming majority of the mutants fight in close combat, it’s tiresome to blast rounds into mindless lizards, especially when they could’ve provided standout set pieces amongst the human-on-human combat. They’re not even particularly difficult to kill – slightly tougher than the standard human enemies, and two shotgun rounds will deal with them, but let them get too close and they’ll have you reverting to the last checkpoint pretty quickly.

It’s testament to Last Light’s qualities, then, that it manages to entertain despite these various flaws. Its world, story and survival gameplay create a unique first-person shooter, and Last Light is a worthy successor to the original game, even if it carries similar problems. In a pre-apocalypse world, Last Light’s roughness would perhaps not be so forgiven, but it feels somewhat suitable here. It’s also a game about mutants, communists and alternate reality Nazis in gorgeously creepy Russian tunnels, so there’s that. Oh, video games.