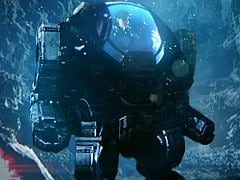 2012 has not been kind to Mass Effect, and it feels as if the Internet unanimously decided one day that the whole series is now void. So long, Normandy! But I’ve been schlepping around the Milky Way with Commander Shepard and his flock for almost five years – which is longer than I’ve known most of my current batch of real-life friends, to put it into perspective – and I feel that our current relationship is basically like the one I have with my closest relatives. We might argue and shout at each other and have occasional huffy fits when anything involving the Star Child is mentioned, but at the end of the day we’re family and we love each other even when we don’t realise it.

As Mass Effect 3’s first post-release chunk of single-player downloadable content, Leviathan leaves a bittersweet taste. It’s not that these two hours of new content are bad, but that its narrative framework – that the work Shepard is doing is vital and wholly necessary to defeat the Reapers – all feels a bit wonky when players managed to finish the game five months ago just fine, thank you very much. But maybe this is an issue of perspective: the whole package would feel more seamless and natural if played during a second run-through of the game rather than digging out the disc solely for the new content, but it’s abundantly clear Mass Effect 3 can’t handle any extension of a clearly finite narrative arc in as seamless a fashion as the more open second game.

BioWare is clearly making an effort to tie Leviathan into the overall plot, mind, and additional dialogue is even added to the contentious Star Child finale that further details the origins and motivations of Shepard’s most troubling foes. Yet it’s hugely unlikely most players will be so incentivised by the Leviathan content they’ll be desperate to trigger the sprawling trek through Mass Effect 3’s end-game one more time, especially if they blasted through it already for the Extended Cut DLC.

The meat of the content must be played earlier in the game, with the Leviathan mission neatly slotting into any of the events that unfold around Mass Effect 3’s middle sections. This offshoot of content has Shepard trekking across a trio of missions, spanning from an eerie, sparsely populated space station, to a desolate colony lying on the shear of a cliff face and, saving the best to last, a gorgeous underwater sojourn with rippling waters that manages to recall some of Rapture’s finest moments.

Interspersed throughout the adventures are regular return trips to unravel the secrets of Leviathan in a tragedy-stricken laboratory on the Citadel, forcing Shepard to do some detective work instead of the game neatly pointing out the next location on the Galaxy Map. These are some of Leviathan’s most delightful moments, the player rummaging around plenty of hidden trinkets and buried treasures that play to those who are most aware of the series’ spiralling sub-plots.

Leviathan’s action scenes, as this is Mass Effect 3 after all, have you vying against the Reaper armada in all the ways you’ll be massively familiar with already. BioWare does its best to keep long corridor slogs out of Leviathan’s two hour adventure, instead replacing one form of padding with escort and FedEx objectives lifted wholesale from the game’s multiplayer modes.

There are an additional cache of upgrades and war assets to unlock, though these too feel superfluous in a game that many are likely to have completed enough times already. Leviathan manages to just about recapture what makes Mass Effect compelling, but by failing to develop any of the game’s most central characters it struggles to find a place in a narrative that many of us will already be done with.