Lovers of the water and haters of human beings have reason to rejoice this week, with the release of Maneater, a game in which you play as a shark, swelling from pup to fully primed force of nature and preying on the flabby residents of a coastal resort city. To those relishing the thought of being the ultimate baddy, however, the game delivers a salty slap, in the form of Scaly Pete: a shark hunter with a rusted beard, a belly like a hull, and an obsession worthy of Ahab. He speaks in a Cajun growl, describing his vocation as a “sacred honor” that is “in the blood.” Great, I thought. Within five minutes, not only had my position as villain been usurped but most of the scenery had already been chewed.

The second, larger force of malevolence is man—an age-old twist that nonetheless bears the uncomfortable twinge of truth. No sooner are you sliced from your mother’s stomach and scarred by Scaly Pete than you are lobbed into a bayou whose streams have been polluted to a urine-yellow brew. As you explore the open world—sizeable, but hardly oceanic—you find sunken mountains of golf balls, leaky barrels, and other bits of rubbish. Your findings are framed by a documentary, called Maneaters vs. Sharkhunters, and narrated by comedian Chris Parnell, who supplies a sports commentator’s smoothness. This strikes me as an advisable move; one way to prevent sinking into the preachy is to keep things buoyant with satire. Maneater is borne along by the same eco-conscious currents as Abzû; but whereas that game, directed by Matt Nava (who worked as an artist on Journey), opted for abstruse imagery and orchestral strings, Maneaterpursues its themes through the brackish territory of the B movie—no less effective a tactic.

The chief pleasures on offer are those of the power fantasy and of the newly burgeoning subgenre that we might call the zoological misadventure. The mascot of this movement is the titular goose from last year’s Untitled Goose Game, whose role was simply to ruin the afternoons of a restful village. The irritant joys of the flap, the honk, and the waddle are replaced here by the markedly nastier kicks of the knifing fin, the breach, and the bite. Though the methods differ, the cause remains the same; whether your gripe is with the peaceful, those packed to the gills with money, or—aggravated by our present moment—the crowds lounging on the beach, you now have a vicious new way to vent your resentment.

The developer, Tripwire Interactive, has clearly proceeded with a simple brief: to evoke the feeling of driving Mother Nature’s Ferrari. First of all, the swimming—the word falls pathetically short—is satisfying and simply laid out. Before long, it becomes a languid form of flight, and after a steady diet of upgrades it turns practically jet-propelled. On top of that, you play as a shark, not the shark; the decision to go for the bull shark, rather than the great white, injects our hero with the plucky sense of having something to prove, while also crucially allowing for freshwater exploration—a vital skill for the budding killer.

The map is cut up into closed areas—travel between them triggers a loading screen—each with their own flavour, providing the modest motivation of seeing something new: hopping from the dinge of the bayou to Golden Shores, say, a Florida-style spread of fairways and hotels, where the canals are the cool blue of a cologne advert. This hub-capped approach will come as a merciful relief to any fellow-thalassophobes who, like me, can’t bear the endless, awful blue of the sea. There are some areas, such as Sapphire Bay and the dreaded Gulf, which provoke prickling discomfort. I recommend pelting these with soothing pings of sonar—essentially your shark-vision, which washes the world in grey and highlights your surroundings. 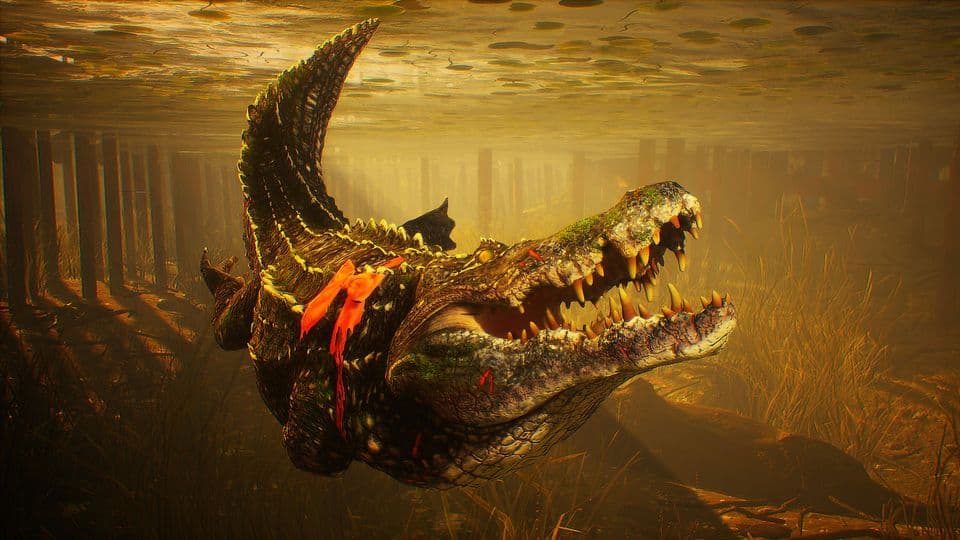 The majority of the violence is aimed at other ocean-dwellers—a surfeit of critters, such as barracudas, makos, hammerheads, alligators, and whales. The combat has a satisfying, appropriately messy, chaos, with more than one species muddling in; often I would be doggedly pursuing an alligator, for example, only to fall victim to a barra-coup d’état from the sides. My overall strategy—utilising the evade, the tail whip, and the thrash—more closely resembled a fish hooked ashore, flopping and gasping in the air: relatively underpowered, as fantasies go. (This is greatly unhelped by a flagging frame rate and a general layer of jank, which a patch or two would doubtless flense.) Clearly the larger lure is humankind, and the gleeful malice of circling a pair of pedalo riders and chilling their hearts with fear, before being gratified with a geyser of red, is one of the year’s highlights. It is as though a concealed thirst were being slaked.

From where does all this frenzy flow? The urge to slip our skin and fin through the deep was most famously indulged by Ecco the Dolphin, in 1992. It was an action-adventure, light on the former, that proved popular enough to spawn a pod of sequels, flooding into 3D on the Sega Dreamcast with Ecco the Dolphin: Defender of the Future, in 2000. But it wasn’t until 2006’s Jaws Unleashed, which swapped Ecco’s brand of bottlenosed curiosity for officially licensed brutality, that we got a taste of something darker. That is the game to which Maneater owes its largest debt, and Tripwire Interactive nods at and nibbles the flank of its forebear with style. (There is an achievement entitled “This Is My Movie,” awarded for killing an apex great white—listed in-game with the “great” in mock-skeptical quote marks.) For connoisseurs of gore, Jaws Unleashed—with its billowing vapour trails of blood and fully featured dismemberment—may remain unbeaten, but Maneater, while possessing fewer teeth in that regard, is still the superior game. 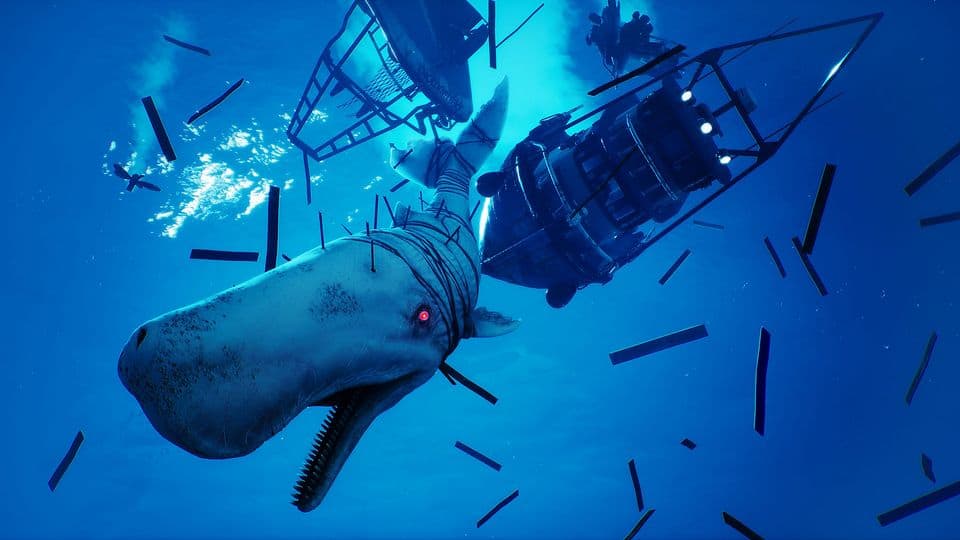 The irony is that its strength—the freedom to roam and ravage to your heart’s content—is also its shortfall. The trouble with a premise of such cruel purity, when twined to an open-world template and cluttered with side quests, is that the game comes adrift before it ends. It’s only around ten hours long, but I had my fill after five or six—long before the last of your showdowns with Scaly Pete. Not that it isn’t easy to get hooked by the diversions on offer; most of my time was spent in idle play, trawling for collectibles (in a nice touch, car licence plates). The rewards for extracurricular hunting are the various upgrades—allowing you to encrust your fins with bone, charge your teeth with lightning, and equip your flanks with poison pouches. I mean, call me a purist, but since when was a shark not enough?

The price that Maneater pays for its satirical too-muchness is the true wonder and horror of the unadorned depths, summed up nowhere better than with its star. The body of a shark—the long, lethal slash of grey, the basins of impenetrable black, and the impossibly widening maw—is a nightmare of natural design. It needs no mutation. The genius of Jaws was in the terrible truth that lurked below Spielberg’s story: that there was no story, no vendetta, nothing personal; that this was a creature upon which no human narrative could be draped; that any plot was a pale comfort in the abyss; and that the monster below was a force that would drench any possible flickers of anger or hatred—an utterly blameless bringer of death. If you want to capture that in a game, you’re not gonna need a bigger boat.

Available on: PlayStation 4, Xbox One [reviewed on], Switch, PC

The chief pleasures on offer are those of the power fantasy and of the newly burgeoning subgenre that we might call the zoological misadventure.
7 Shark Eating people Environments Pacing Jank