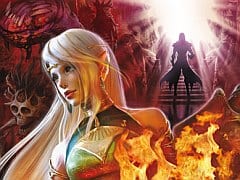 Kingdom Under Fire: Circle of Doom is Microsoft’s first Xbox 360 release of the year, following an incredible line-up of titles during the last quarter of 2007. Sadly the roll hasn’t continued, with Circle of Doom being one of the more uninspiring titles to be published by the platform holder. It’s essentially a slower, more generic God of War, and it fails at being anything other than mediocre.

Landing in that category of games that you’d label as “OK” if asked by a mate how to describe it, it’s hard to get excited over what’s on offer. The storyline certainly isn’t worth talking about, as the game barely covers what’s going on and you’re left to figure out why you’re slaughtering endless waves of enemies and talking to people in a dream world. The story is so light on detail that it’s almost as if it was accidentally left out.

Fans of previous Kingdom Under Fire games on the Xbox will feel even more let down as the much praised strategy elements are completely absent here, with your weapon choice being about as deep as the gameplay ventures. To begin with you’re presented with five characters to choose from (one more is unlockable) and they fall into the typical hack ‘n’ slash stereotypes. You’ve got your fast but weak character, the strong but slow character, the completely average at everything character and the combinations in between.

All-rounder Duane (a slightly odd looking older man with a pot belly and jolly running style) was my choice, seeing as I couldn’t decide which attributes I wanted over others. The basics of the game are all laid out at the start, and we really do mean basics. Circle of Doom is a hack ‘n’ slash game, but it has small elements of RPG thrown in. For example, your character has a HP and SP meter, one red and the other blue. HP is your typical health bar while SP is your stamina.

Different weapons drain different amounts of SP, so their effectiveness in battle depends on the situation. In a large group a weapon that uses small amounts of SP allows you to quickly reel off attacks, but when faced by single enemies a more powerful, but more draining weapon is often the better option. You can equip items in the traditional RPG way, such as new armour picked up from the battlefield, and synthesise items together to forge better weapons, but don’t be fooled into thinking you’re playing anything other than a hack ‘n’ slash.

One of the oddest aspects to the game is the dream world you enter. You’re able to fall asleep in zones around idols (there are three that also let you trade and synthesise items) positioned at various points in the dungeons. In your dreams you’ll meet characters that hand out quests – complete these and you’ll gain new abilities. Most the time though, it’s just not worth it. The tasks required of you are so dull and require playing sections over and over again, it’s almost like you’ve stepped into a grind-fest MMO.

At the end of each stage – made up of numerous sections – you’ll fight boss enemies, but despite their impressive design they fail to excite. Take the very first boss you encounter – a spider-like forest monster with numerous heads and intestines dangling loose beneath it. For all its noise and disgusting black liquid spewed from its mouth, I did nothing but repeatedly hammer its heads, then shoot its stomach. My reward was a room full of items, including an ultra powerful pistol, and this in turn caused another problem.

I equipped the new multi-enemy piercing pistol and suddenly the game became ridiculously easy. The game allows you to aim when using a projectile weapon (almost as if you’re playing a third-person shooter) but this wasn’t needed. I simply ran around like some kind of superhero, dispatching skeletons, fleshy statues and plant monsters with ease. All the time I was levelling up, so my HP and SP were increasing and the game became no harder than a walk in the park. Using levelling points on your skill rating also has its advantages, with better items being dropped by the hundreds of enemies slain every minute.

Co-op play for four players over Xbox LIVE is an option, and this does increase the amount of enjoyment you get from the game, but the gameplay is just too monotonous for Circle of Doom to be anything other than a slight distraction. Anyone wanting a modern game comparable to the likes of Diablo will be severely disappointed.

Presentation as a whole is also pretty lacklustre. The game is incredibly reminiscent of the equally disappointing Ninety-Nine Nights, another hack ‘n’ slash published by Microsoft for the Xbox 360. Enemies are nicely detailed and pretty original in design, but the environments are repetitive and pretty bland to look at – despite being randomly generated to a degree. The voice work is worse still, with some completely bizarre accents that seem like something you’d expect in an Alice in Wonderland adaptation – except this is all warriors and monsters.

With the success Sony has had with God of War there’s a real gap on Microsoft’s console for an easy to get into hack ‘n’ slash that’s polished to perfection. Kingdom Under Fire: Circle of Doom isn’t that game, falling way short of the thrills offered by God of War and nowhere near the depth required of a full RPG. Played with friends Circle of Doom is mildly entertaining for a short time, but it’s unquestionably one of the most disappointing games Microsoft has released for the Xbox 360.

Played with friends Circle of Doom is mildly entertaining for a short time, but it's unquestionably one of the most disappointing games Microsoft has released for the Xbox 360.
6 Lots of loot to collect Some dreadful voice acting Highly repetitive Lacks depth

Kingdom Under Fire: Circle of Doom

An action RPG from the Kingdom Under Fire franchise.

Kingdom Under Fire: Circle of Doom

An action RPG from the Kingdom Under Fire franchise.