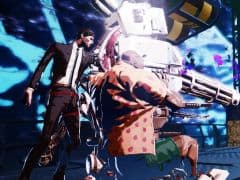 All mercenaries need a catchphrase. Upon removing the head of his blood-spattered victims, Mondo Zappa nonchalantly drawls ‘Killer is dead.’ With one fatal strike, another of the world’s most extravagant baddies limply hits the floor, freeing a squeaky damsel in distress from her unlawful abduction. Cue smooth jazz.

Much like Killer7, this is not a game that makes a great deal of sense. Suda51’s creative spark remains interesting, distinguished and instantly recognisable, but there’s an underlying sense that this was developed on weaker foundations than previous titles.

It’s a fractured game, built on episodes that thrust you across a world of psychedelic countries which vaguely mimic the characteristics of their real-world counterparts. It takes inspiration from Lewis Carroll, Tarantino and Ang Lee, offering an ultra-violent romp through 12 episodes and plenty of highly-sexist ‘Gigolo’ side quests to weep at.

Sadly, Suda51 fails to grab his audience’s attention with a tale that never feels like it has properly started. It’s a game which, between executing enemies in beautiful surroundings, has you staring at boobs and constantly helping women who are largely shown to be idiotic. The sexism is so powerful, even a caveman would bash his own brains in under the awkwardness.

The game’s stop-start nature is amplified by repetitive swordplay. Mondo is continuously pitted with fighting respawning opponents in tight arenas before tackling a more difficult foe. After this, spew some incomprehensible gibberish and head back to the office with the pretentiousness of a GCSE student trying to sound important.

You’ll largely use combinations of X and Y to overcome each threat, and a blood-firing cybernetic arm gun is often called into action, as are gorgeously depicted special moves. But the game’s eagerness to ensure you continue using the same methods of attack quickly renders the action boring. Not even a stunning soundtrack can inspire beyond the occasional head nod.

Entertaining in places, Killer is Dead will only appeal to players who enjoyed Suda51’s previous titles, particularly Lollipop Chainsaw. If you’re not convinced by now, this will do nothing to alter that mindset, unless objectifying women is your thing.

Version Tested: Xbox 360. Played for approximately 14 hours on a number of difficulties.Click here to read about VideoGamer.com’s new review policy.