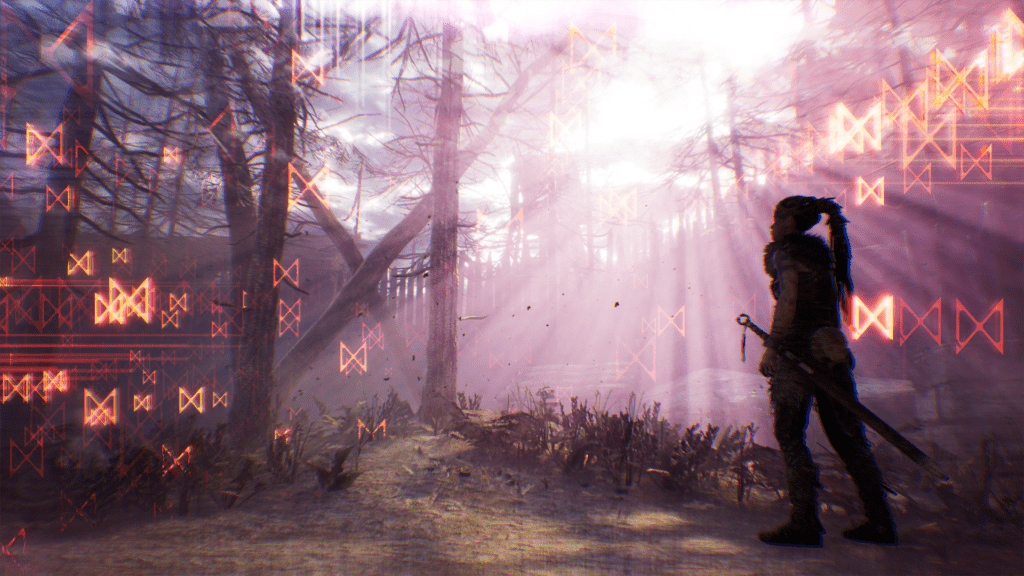 Hellblade: Senua’s Sacrifice is the sort of game that you’ll either really hate, or really love. It will be polarising. It is a jar of marmite, and one that I would encourage you to go out and taste yourself without reading too much about it first. It has no HUD, no tutorials, no points in combat where the game pauses and a helpful, friendly overlay says ‘PRESS X TO BATTER THIS GUY’. You have to figure it all out yourself. But you, and Senua, are never alone. There is a constant barrage of voices commenting on Senua’s every move, sometimes whispering, sometimes shouting, occasionally helpful, often mean.

‘She needs to look! She needs to use her eyes!’ Aha. Fumble with the controller to find out which button helps Senua focus when she looks at something. They can lie, and tell the truth. ‘What’s she doing? She’s gone the wrong way.’ Have you? Maybe you have. Indeed, as has been discussed, it’s quite possible that the game itself is lying to you, in a manner that hasn’t quite been cleared up yet: near the start Hellblade tells you it has a permadeath system, and while some are certain that it’s a bluff to create tension, others still believe it could be real.

In combat, sometimes a voice will shout: ‘Behind you!’ or ‘Look out!’ and you know to throw your sword up in a block (once you’ve figured out which button that is, at least). They’re recorded binaurally, so the voices appear to be coming from different directions, externally, especially with headphones on. Murmuring in your left ear, screaming in your right. They’re not inside Senua’s head, they’re part of her reality (and the game never says ‘Aha! It was all a hallucination!’ because this is Senua’s reality, and so it must be ours as well). It’s unfortunate that the captions don’t come close to giving a similar experience, when they could have been used far more creatively than the standard top of screen/bottom of screen layout Hellblade uses.

Some of the voices accompanying Senua take the form of people she knew, a mix of remembrances and new thoughts: Druth, a former slave who taught her about the gods of the Northmen, until she could see all that he saw too; Dillion, her lover, who could calm the voices and told her she only saw the world a different way; Shadow, an embodiment of Senua’s belief that she is cursed and tainted by darkness, a belief drilled into her in her formative years. They all offer guidance as Senua progresses.

Senua, a Celtic warrior, is on a mission. She must save her lover’s soul from the hell of the Northmen, the Viking raiders who sacked her home. She must cross the river and pass through Hel’s gate (Hel being the ruler of the dead, a half rotted giantess with black eyes, the daughter of Loki). Senua faces trials that remind her of those she has faced in real life, and through them, and the voices remembering things they’ve seen before, you learn about the trauma Senua has faced, made greater by her struggles with her own mental health and others’ lack of understanding of it. Great care has been taken, with input every step of the way from psychologists and people who have experienced psychosis, to give a as faithful a representation of it as possible. The hardest battles are fought in the mind, says Dillion, although Senua has physical battles as well.

The fighting itself is fluid and fast, and requires experimentation on your part to learn that now is when to parry, that combination will result in a chained attack, and when facing this particular enemy you must knock back or dodge to the side, because if you jump attack he’ll just toss you over his head on his shield. Combat is fairly infrequent, but comes in waves when it does, with combinations of different enemy types in different numbers, each a picture of barbarism, bare chested, bone masked, and shouting in a language Senua doesn’t understand. You have to get into a rhythm with it, understanding your enemies’ moves, because Senua has a natural aptitude for seeing the flow of battle, and when she falls out of step she starts losing. Then is when the voices tell each other she’s hurt, her enemies are faster, and she’s not strong enough.

Other times Senua faces puzzles. Many are solved with a bit of platforming to find the right perspective (though Senua’s skills in this direction are inconsistent: she can climb up some ledges but is unable to step over medium-sized flat rocks). Gates in Hel are locked with runes, and by finding the runes in the world around her Senua can open them. She sees their patterns in shadows cast by windows and in tree branches lined up just so, even as the voices are telling her the runes are pointless, and she doesn’t even understand what they mean.

Hellblade is strangely lovely in the horrors Senua sees, and the melancholy — the broken ships on an iron grey beach — but at times actually lovely too, reflecting that psychosis can manifest as colour and beauty. Senua sees the corpse wave Druth described to her, and runs from a giant beast in the dark heart of a mountain. She fights through a charred forest full of ash and blackened corpses, the embers glowing in time with her breath, and another full of illusions, bones, and raven feathers. It is, at some points, possible to do these things slightly out of order, where, for example, Druth will tell you to use something that you’ve already used. It’s a small but noticeable niggle, an extra link in an otherwise beautifully made chain that pulls you, loop by loop, to an end that finally helps you understand the beginning.

Hellblade is unflinching. ‘I have,’ said Ninja Theory’s chief creative director Tameem Antoniades, ‘Never described this game as fun.’ Because, of course, not being fun isn’t incompatible with being very very good. Hellblade: Senua’s Sacrifice is beautiful, discomforting, and compelling. It might challenge what you like about games, but challenge is good. You’re doing yourself a disservice if you don’t try it.

Hellblade: Senua's Sacrifice is beautiful, discomforting, and compelling. It might challenge what you like about games, but challenge is good. You're doing yourself a disservice if you don't try it.
9 It might make you uncomfortable Beautiful and horrible audio and visual design Fast, stylish combat Incredibly compelling story