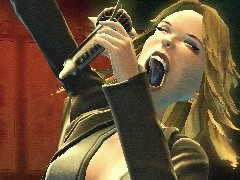 I was going to write a really smart ass intro about how many Guitar Hero games are being released, but it’s easier to simply relay the facts: by the end of 2009, 14 individual GH games will have been released since the beginning of 2008. That’s more than one every two months. It’s an insane figure, but it goes to show just how popular the one-time niche game has become. Guitar Hero Greatest Hits is essentially World Tour with different tracks, so if that’s what you wanted you can probably skip the rest of this review, safe in the knowledge that you’re going to get more of the same.

Greatest Hits, as the title suggests, is a collection of some of the best tracks featured in Guitar Hero games over the last few years (Guitar Hero, Guitar Hero II, Guitar Hero Encore: Rocks the 80s, Guitar Hero III: Legends of Rock and Guitar Hero: Aerosmith). The difference here is that they’re now all master recordings (not cover versions), they’ve been re-worked to support full band play (assuming you’ve got the drum kit, an extra guitar and a microphone) and there’s a loose story that sees you playing set lists at venues based on the wonders of the world. As with any greatest hits compilation, fans will have seen most of this stuff before, although at least Activision and developer Beenox Studios have brought all the content nicely into the modern Guitar Hero era.

In terms of game modes you get the core career mode, which sees you earning stars from your performances in order to unlock new set lists and progress through to new venues. You get to design your own rocker and you’re treated to the usual Guitar Hero stylised presentation. Outside of this there’s quickplay (which lets you play all the tracks included on the game disc without unlocking them), head to head, the music studio first seen in World Tour, online play (not included in the PS2 version) and numerous extras such as unlocked videos and a practice mode.

There’s nothing here that’s new in terms of features or gameplay. In-game you’ll be strumming or drumming along to the notes as they stream down the screen, there’s the same multiplier and star power mechanic that will see you repeatedly playing each track in order to achieve a new high score, and you can still choose between five difficulty settings (beginner, easy, medium, hard and expert). Long-time fans will notice that lots of the songs have had their note structure changed, meaning that if you’ve learnt to play them before there will be an adjustment period. Changes to make use of the World Tour guitar’s touch panel have also made a number of the songs easier, which won’t go down well with the challenge-starved hardcore.

Most important of all is the set list, which is thankfully very solid. It’s only 48 songs, which is considerably less than we’ve grown used to in full Guitar Hero sequels (and this is a full price release), but the quality is there. Our favourites include Boston’s More than a Feeling, Lynyrd Skynyrd’s Free Bird and Rage Against the Machine’s Killing in the Name. There’s also some metal on here if you’re a fan, including Bark at the Moon, Through the Fire and the Flames and Raining Blood. Sadly there’s no DLC on offer. You can’t download new tracks or use any existing content you’ve bought for World Tour, which seems like a strange decision on Activision’s part.

Despite a few niggles with the note structure changes and the nagging feeling that this could have all been DLC, Greatest Hits is still a lot of fun. If you’ve been waiting to play some of the best tracks from previous games with your friends as a full band, you’ll want to snap this up right away. If you’re new to the series, though, last year’s Guitar Hero World Tour offers better value for money and the ability to expand the track list through DLC.