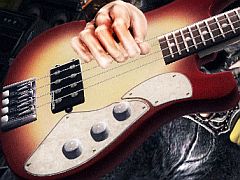 It’s hard to believe that we’ve seen so many Guitar Hero games released over the past few years, and it would be easy to assume that the latest, the stunningly named Guitar Hero 5, is just another slight variation on the previous entries. In some ways that’s true – you’re not getting a radically different game here – but developer Neversoft hasn’t simply got together 85 songs and thrown them into World Tour. With a raft of new multiplayer modes, an improved interface and toned down visuals, Guitar Hero 5 is worthy of the same praise that any extremely good video game sequel would receive.

Multiplayer seems to be the best place to start as it’s the area of the game that’s received the most additions and improvements. Party Play might sound like an obvious inclusion, but its implementation is superb. The game essentially turns into a music jukebox, playing songs on its own accord, while players are able to jump into the game whenever they feel like it and with any instrument. If four players all want to be on lead guitar, they can, and if you happen to have four drum kits in your living room, there’s going to be a lot of noise. The interface is brilliant, allowing you to set the various options for difficulty and play style, and it’s easy to skip a song, pick something new or create your own play list. Without any scoring to worry about, everyone is free to jump in and have fun.

For those who want to compete rather than just have fun with friends, there are obviously plenty of score-based multiplayer modes too, either played locally or online. One mode raises the difficulty mid-track every time you play a section without flaws, another kicks out the player who performed worse during the previous section, and whereas some music games make it a chore to change even the most basic options, it’s all accessible here with a few button presses. You don’t even have to unlock the tracks, with the entire track list available to play with friends from the moment you start.

Actual gameplay mechanics remain pretty much as they were, with you strumming on a guitar, banging a drum or wailing into a microphone in time with the music and on-screen notes. If you choose to play as a proper band you’ll have one player on lead guitar, another on bass, a third on drums and the final player as vocalist. One of the problems the series has always suffered from is the relative simplicity of bass play, and while it’s more fun here than before it’s still nothing on playing lead guitar. Drumming is as hard as ever, especially if you’ve never played before, and singing can once again be cheated – but where’s the fun in that?

Once you’ve formed your band, named it and got all the members picked out, it’s time to perform gigs at various venues. Performances earn you stars, with the better you do the more you receive as a reward. Stars are used to unlock new venues and progress through your career. It’s a very simple system and generally rewards you for high note hit percentages rather than having such a strong focus on massive streaks (hitting notes in succession without missing any). Some extra stars can be earned through successfully completing bonus challenges for each performance, such as scoring a certain number of points or hitting as many snares as you can. You’ll need the complete set of instruments to get all of these, but they do make you approach songs in slight different ways.

In terms of presentation the Guitar Hero games have always had a touch of extravagance about them, and this hasn’t always gone down well with rhythm game fans. GH5 still has a lot of bravado, but it’s not quite as in your face as previous titles. In-game the on-stage performance visuals have a less vibrant appearance, there’s a subtle filter that creates an ever so slightly more subdued mood and the menu screens don’t leap around all over the place at every given opportunity. When you’re 100 per cent focused on nailing a track on expert you’re not really going to be bothered about what’s going on in the background, but more casual players will likely appreciate the subtle change in tone.

Commenting on a track list is never easy, with everyone’s taste in music varying so wildly, but we like what Activision has included on the disc. You can find the whole 85 song track list here, but our favourites include Nirvana – “Smells Like Teen Spirit”, Blur – “Song 2”, Bob Dylan – “All Along The Watchtower” and Kings Of Leon – “Sex On Fire”. There’s some cheesier stuff too, with Bon Jovi – “You Give Love A Bad Name” being something of a guilty pleasure. They key thing is that this is a track list that should please an awful lot of people, even if every song isn’t one of your favourites. There’s also DLC being released every week, and for a small fee you can import 35 songs from World Tour and just under half the tracks on Smash Hits. All of them would have clearly been preferable, but it’s better than nothing.

On top of the core game modes there’s a quickplay option, training for newcomers to the series or those who haven’t used the drums before, leaderboards to keep track of how you compare to the rest of the world and the still impressive GHStudio for making your own tunes. All in all it’s an impressive package. There are also a number of exclusive features for 360 and Wii owners, but nothing that will upset PS3 owners too much. Xbox 360 avatars and Wii Miis can be used in the game. Completely unique to the Wii game is Roadie Battle, a mode which links two DS consoles to the game, enabling a guitar duel battle mode for four players – two on Wii and two on DS.

Guitar Hero 5 delivers everything fans will want. It doesn’t stray far from the well-trodden formula we’ve come to know and love, but it doesn’t really need to. The core gameplay mechanics are as good as ever, the presentation has been toned down for the better, there are some brilliant new multiplayer options, and everything feels more streamlined than before. Well worth adding to your playlist.

The core gameplay mechanics are as good as ever, the presentation has been toned down for the better, there are some brilliant new multiplayer options, and everything is more streamlined than before.
9 Great multiplayer modes Interface has been improved Loads of good tracks Essentially not much has changed