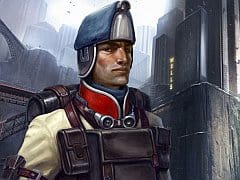 Although you might not have guessed it from the thick layer of polish lavished upon the title, Greed Corp is actually W! Games first video game outing. Taking place in a fantasy universe known as Mistbound, four robotic factions fight for dominance on a decaying landscape made entirely of hexagonal pillars. In this strange and beautiful world, tiles can be harvested for resources, but – and this is the dilemma at the very heart of the game – the act of harvesting destroys the pillars. Whereas most strategy games of this nature see the player building and expanding, Greed Corp turns the conventions of the genre on their head. In an environment that diminishes from round to round, Greed Corp has one simple objective: be the last faction standing.

First impressions of the game weren’t great; I fumbled my way through a tutorial without the foggiest idea what I was doing. Things were happening I didn’t seem to have any control over; land was literally disappearing beneath my feet and my units were falling into the murky abyss below, never to return. These initial thoughts are in no way reflective of the quality of the game, however, more a reflection of my own incompetency at understanding tutorials. As with everything in life though, experience is the best way to learn.

With information from the tutorial in one ear and out the other, I jumped into the first campaign mission without the vaguest idea what I needed to do. The simple AI of the first level wiped the floor with me, and after a string of similar deaths thereafter I was beginning to find the game a bit of a chore to play. By the third or fourth attempt, though, everything suddenly fell into place. The game tightened its grip on my attention and the next few hours were spent refining my strategies. With the knowledge that losing pillars wasn’t the end of the world (well, mine at least), I learnt to strategically destroy my land in order to increase my wealth, whilst moving my minions to safety before it disappeared. I learnt the role each unit played in the game, and worked out the best way to stop the enemies’ advances. All of a sudden, Greed Corp became incredibly good fun.

At the start of each round, you have but a few tiles to your name (represented by the pattern of your faction) and a set number of walkers. Walkers are your only moveable unit; the only way to traverse the hexagonal playing field. On your first go, the best thing to do is to move some walkers around to claim tiles. With some land under your belt, you can then create a harvester; the most important unit in the game. They extort resources (money, for all intents and purposes) from the land in exchange for destroying the tile and those surrounding it. Each pillar will only last four rounds before it crumbles and falls into the murky depths below. In order to survive, you need to adapt to your environment, and move around the board in a well thought out fashion. To do this you’re probably going to need some more walkers.

This is where armouries come into play, effectively barracks that allow the creation of walkers. These can be upgraded to include a canon, which can be loaded with ammunition to attack enemy tiles from afar. Finally, there’s the all important Carrier, an expensive unit that allows the transport of walkers to any other tile in the game. By dropping your walkers off at an enemy tile, you can convert it to one of your own where you can really do some damage. By creating a harvester in the middle of enemy territory, their land will suffer the same crumbly fate as any other tile mined for resources, and in the latter stages of the game, losing land can be the difference between survival and defeat. You can even choose to self destruct these harvesters, setting chain attacks into motion.

Although there are only five units, the scope for strategy is immense. Striking the correct balance between land mass and resources is entirely dependent on the strategy you choose to adopt, and really plays on the titular word ‘Greed’. Be too greedy with harvesting, and you’ll destroy all your land, leaving yourself with nowhere to regroup should the going get tough. At the same time, though, greed is a good thing; you should try to obtain as much land as you physically can, and take from your enemies too. Greed is ultimately the way to victory.

In order to win, the opposing factions must be eradicated from the board. To do this, all their buildings and walkers must be destroyed. The quick paced nature of the game enforced by the destructible environments make for some pretty tense battles, especially in the final stages of a game when two factions battle it out over a few scraps of land. The single-player is a lengthy enough experience, but the game comes into its own online. With four-player support, players can pit their survival strategies against other players over Xbox LIVE or PSN. The game feels like it was designed around these online skirmishes, and time will undoubtedly prove this to be the most successful aspect of the game.

Greed Corp is a fantastic addition to XBLA and the PlayStation Store; a thoughtful and charming title that puts a unique spin on the board-game strategy. While it might take a while to rewire your brain to the game’s way of thinking, Greed Corp offers an experience quite unlike anything else. W! Games has demonstrated a quality of game design well beyond its experience, fusing great visuals with refreshing mechanics to create a quirky and thoroughly enjoyable little game.

Greed Corp is a fantastic addition to XBLA and the PlayStation Store; a thoughtful and charming title that puts a unique spin on the board-game strategy.
8 Unique take on the strategy genre Charming visual and sound design Tense and frustrating at times Initially confusing