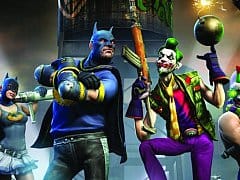 More so than any of Batman’s various forms over the ages, Gotham City Impostors seems to harbour most of its influences from the Adam West era, with slapstick noises, goofy humour and corny dialogue taken straight out of the 1960s. I’m actually surprised “Pow” and “Thwack” aren’t plastered over the screen when you hit somebody, though with the way Monolith and Warner Bros have assembled their goofy creation I imagine there’s already plans to flog that down the line as premium DLC.

Sold for a skimpy 1200 Microsoft Points, Gotham City Impostors’ initial charge is clearly intended to be your first of many. But can an unpalatable focus on shaking its players until money falls out be enough to completely cripple a six-versus-six online shooter? The answer (it’s yes, by the way) won’t surprise you. The core idea behind Gotham City Impostors is wonderful, and there’s plenty here that tickles my fancy, but it’s hard to get behind a game that seems to be designed with such utter contempt for its players.

The biggest problem is that this is an online FPS designed around the traditional breadcrumb trail of swag and unlocks, but it’s a far too miserly when it comes to doling out XP. Gotham City Impostors denies you nothing provided you’ve got unlock points to spend, but earning these tokens – you get ones to unlock new gear, customise your weapons, buy perks and so on – is entirely dependent on what the game dishes out as you level up, and if you blow your precious points on something you don’t really like (there is no try-before-you-buy, and certainly no refunds) it can be an extremely long and painful wait until you’re awarded another chance. Please, sir, I want some more.

A sense of being a bit too stingy is a problem the game never manages to recover from. And that’s a real shame, because there’s also a lot of joy to be found in Gotham City Impostors. I particularly like the game’s unique take on lateral movement, forcing you to look at the skies (is it a bird? Is it a plane? No, it’s a profanity-spewing teenager with a heavy bodyset dive bombing you!) thanks to an abundance of grapple hooks, jump boots and gliders. It’s something FPS developers have been desperately trying to include in their games for yonks now, from the jetpacks of Halo: Reach to the multi-storey maps of Call of Duty: Black Ops, but Gotham City Imposters might actually be the most successful attempt at vertical map design in years.

Out of the box you’ve got three staple modes, Team Deathmatch and One-Flag CTF alongside Fumigation, which adds a spin onto your usual Domination formula. There are five maps out of the box, and while the gaudy glitz of Amusement Mile or Ace Chemicals, a slightly zanier take on the plant from Tim Burton’s 1989 flick, are thoroughly enjoyable, it’s much harder to care about the wholly generic Docks or the bland walls of Gotham Power. Somewhere in the middle you’ve got the iconic Crime Alley recreated with an abundance of off-putting green mist.

The ace up the game’s sleeve is not where you play, however, but how. Each player carries their own gadget, and each is a crude riff of one of Batman’s own – instead of a high-tech grappling hook, for instance, you can cart around with a homemade solution complete with the comedic squeak of a rusty winch. Then there’s roller skates, jump boots or the strap-on glider – each of these little toys help the game shine, and the maps become virtual playgrounds where you’re pushing the limits of your low-budget gear.

There’s an odd juxtaposition with the weaponry, however, which is basically reworked versions of Call of Duty’s various shotties, SMGs and assault rifles. Sometimes matching all this stoic weaponry with the slapstick of roller skates and biff noises is the funniest thing of all, but at other times it feels like the game is suffering from an identity crisis of sorts.

Still, maybe it would be better if I bought myself a one-hour XP boost (40MSP), a mascot to follow me around in games (400MSP) or just a custom player card set (80MSP). The latter is especially perplexing, seeing as how the free, in-game offerings are leagues ahead of the premium options; you get stuff like a squirrel shooting laser beams out of its eyes and, my personal favourite, the monocle-sporting Dapper Pickle.

It’s just, well; it’s particularly difficult to get that bitter taste out of your mouth. There’s those telltale “Checking for Downloadable Content” screens as you boot up the game, and you’re forced to sit through pages upon pages of legal agreements whenever you start the game, or whenever they’re updated – which has already happened once since launch. Too busy collapsing under the weight of its EULAs, WBIDs and DLC agreements, Gotham City Impostors can’t find the time to really think about its contract with the player – and that’s the most important one of them all.

Then there’s stuff that’s just completely baffling, like the game’s complete inability to match players into games that have already started – those kind of matchmaking particulars might work for a game the size of Halo, but here it just causes untold problems and a lengthy wait on the lobby screen. Monolith has already promised a patch to rectify the situation, but you’ve got to ask how a schoolboy error like this was ever allowed to make it into the final game to begin with.

None of this stuff is big enough to be a death sentence for Gotham City Impostors, however, but only time will tell how Warner and Monolith handle the growth and support of its game over the next few months. There’s already been at least one new map promised for free in March, but initial signs for the future of this game don’t seem promising – the Xbox 360 playerbase seems to be on the wane less than a week after launch. A good idea with some unfortunate but devastating missteps, Gotham City Impostors still has enough time to avoid the custard pie flying at its head.

FPS from Monolith set in an overrun Gotham City.

FPS from Monolith set in an overrun Gotham City.