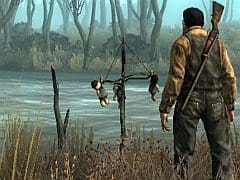 Bethesda seems to be following a steady curve with its DLC for Fallout 3. Operation Anchorage was something of a linear let-down but The Pitt proved to be far more interesting, showing the real potential for expanding the game’s post-nuclear playground. Then Broken Steel went one step further, rewriting the flawed ending from the original campaign and granting players a further 10 experience levels to grind through. That was supposed to be the end of the line for Fallout DLC, but then Bethesda changed its mind and announced a further pair of add-ons: the alien-themed Mothership Zeta, due next month, and Point Lookout, a grizzly adventure that allows players to explore the swamp-like remains of a protected state park.

There’s a definite feeling that Bethesda’s coders have hit their stride by this point. While Point Lookout largely finds you doing the same old Fallout stuff – exploring locations, looting hidden stashes and fighting lots of weirdoes – there’s a renewed air of confidence to the whole affair. While the main quests on offer are relatively familiar in terms of their structure, they’re also littered with neat surprises and clever moments. Even the NPC dialogue seems to be a cut above the standard Fallout cheddar, with one foul-mouthed ghoul standing out as a particularly likable creation.

Point Lookout is also the most open-ended Fallout expansion to date. After downloading the pack and loading a saved game, you’re given a heads-up about the appearance of a mysterious barge on the southern edge of the Capital Wasteland map. Once you’ve battled your way to the dock you’ll meet a strange chap named Tobar, an eccentric ferryman who makes his living by gathering Punga fruit from Point Lookout – a swampland that covers the former state park of the same name. Tobar offers you transit to the area for a measly 300 caps, and wouldn’t you just know it? There’s a concerned mother by the docks who wants you to look for her daughter – a tear-away tomboy who headed to the swamps a few weeks ago.

Tobar only has room in his tub for one passenger, so any followers you might have will be sent back to their respective homes. As a result you soon find yourself standing alone on the boardwalk of a deserted, water-side town. Point Lookout presents you with an open play area that’s been estimated to be roughly one-fifth the size of the Capital Wasteland, and when you first arrive you’ll be struck by the realisation that you have a lot of exploring to do. For those of you who know Fallout 3’s main area like the back of your hand, this will probably seem quite refreshing. It’s not quite a return to the nail-biting early days of low-level exploration, but it’s certainly a change from the more focused action of the previous DLC packs. As was the case with the main body of Fallout 3 itself, how you proceed from this point is entirely up to you. There’s a fairly large clue pointing you in the direction of the main quest, but if you prefer you can go on the hunt for side tasks or simply explore the marshy environment in all its overgrown glory.

Point Lookout’s central thread begins with you helping a zombie to defend a creaky old house from a pack of marauding humans – a clever inversion of the classic horror-movie setup. After this battle you’ll find yourself caught up in a fight between two conflicting masterminds, neither of them particularly nice people. To say much more would be to spoil the story, but suffice to say that the central quests spin out a fun little yarn, laced with plenty of black humour. This expansion largely moves away from the normal “good guys vs. bad guys” setup, and as a result you may do a bit more thinking before committing your firepower to one side or the other. There’s generally quite a high-action pace to proceedings, but there’s one quieter section that’s arguably the best moment in the whole expansion. Again, I’ll refrain from spoiling the surprise, but let’s just say that it’s a true WTF moment that’s almost as good as Fallout 3’s sublime Tranquility Lane section.

Side missions range from a wearingly familiar fetch-quests to a neat little detective mission that has you following the trail of a Chinese secret agent. If you can find it, there’s also an arena-like challenge to take up. Whether you’re on an assignment or just poking your nose around, you’ll find that there’s rather a lot of combat in Point Lookout. Your enemies are pretty hard-boiled, too: there’s the Swamplurk, an acid-spitting variation of the Mirelurk King, and Broken Steel’s Ghoul Reaver also makes a cameo appearance. However, most of the time you’ll be fighting humans – or at least things that are almost human – and it’s here that the DLC makes a minor slip-up.

As you’re probably aware, your major opponents in Point Lookout are mutated, Deliverance-style rednecks. They wear dungarees, they have big lumpy faces and they speak with a yelp-y Southern drawl. They shout and gibber at you as they attack, and they’re altogether pretty creepy. Although one could argue that the design for these nasties is a little OTT for the Fallout universe, perhaps a bit too caricatured, they ultimately work because they’re deeply unpleasant. Unfortunately, they’re also extremely tough – and while this works from a game-design perspective, it’s also a tad unrealistic. I played through Point Lookout with a level 17 character; many people who play this will be at level 20 and above, thanks to Broken Steel. If you’re at this stage then you’re bound to be an armour-clad walking tank… and yet somehow your nuclear arsenal is nothing against the might of a half-naked gimp in piss-stained trousers.

I’m quite happy to admit that this resilience makes for a more enjoyable game. If plasma weapons cut through these guys like a hot knife through inbred butter, there wouldn’t be much of a challenge. And yet I find it hard to shake off the stupidity of a situation. My alien blaster will kill a heavily-armoured Enclave Commander in one shot, but Cletus McBanjo will often eat one and still come running after me. Indeed, he and his cousins (who are also his brothers, uncles and lovers) are able to take up to six shotgun blasts to the head before they finally take a dirt-nap – and I’m talking about the new double-barrelled shotgun, which supposedly does a truckload of damage with each hit.

It’s a minor flaw, but I still think Bethesda could have found a way around it. While I’m complaining, I’m not sure if the new weapons will be used much when players take them back to the main wasteland (you can go back any time you like, incidentally). The new shotgun and the lever-action rifle are a good fit for the atmosphere of Point Lookout, but they’re otherwise a bit dull in comparison with Fallout’s existing arsenal. More interesting is The Dismemberer – a special axe you can find that causes people to burst into little giblets. It’s a bit silly, but it’s also a lot of fun to use.

On the whole, there’s very little to complain about with Point Lookout. The new game world looks great, and the omnipresent vegetation is a real change from the barren rock and destroyed highways that we’re used to. At times the frame rate seemed to take a bit of a hit, but this issue never became serious enough to affect gameplay – the action was just a bit less smooth than usual. There’s a good five hours of gameplay on offer here, more if you take the time to see everything, and the quality of the main quests is beyond dispute. If you’re a Fallout fan with 800 points to spare, there’s really no reason not to pick this up. Rockstar may lead the industry when it comes to expansive DLC, but Bethesda is surely close behind.

The quality of the main quests is beyond dispute. If you’re a Fallout fan with 800 points to spare, there’s really no reason not to pick this up.
8 Offers a new landscape to explore Main quest has plenty of great moments Dialogue is better than the standard Fallout fare The ultra-tough rednecks are a little bit silly