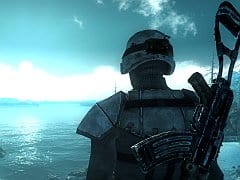 While we’ve (hopefully) come a long way from the days of Oblivion’s ridiculous Horse Armour, it’s still hard to judge the true value of DLC packs. Anything would seem good value when compared to that ridiculous £4-for-one-item fiasco, and yet large expansion packs are still relatively rare, so there isn’t much scope for making critical comparisons. On the one hand, 800 MS Points is roughly the cost of an adult cinema ticket – so that seems like a reasonable price for three or four hours of additional gaming. But from another perspective, those 800 points could also buy you an entire game from Xbox LIVE Arcade.

From a reviewer’s point of view, it’s hard to discuss such small portions of gameplay without ruining the few genuine surprises that they may offer. While we’ll do our best to avoid too many spoilers here, the fact of the matter is that we’ll have to be quite specific about Operation Anchorage. This is not just a more-of-the-same expansion to Fallout 3’s post-nuclear role-playing, but an unusual attempt to take the game in a different direction. And unfortunately for all concerned, it’s not one that entirely works.

After you’ve coughed up your cash and downloaded the new package, you may be at a bit of a loss as to what you’re supposed to do. For some reason Bethesda gives no indication of where your new content can be found, an oversight that will no doubt cause immediate panic in nervous gamers across the land. As it turns out, all you need to do is to load up any of your saved games: within moments you’ll get a mysterious distress call that summons you to a new location called Bailey’s Crossroads, in the south of the map. Once you get there (we had to go via underground Metro tunnels from Marigold Metro station) you’ll find a group of Brotherhood Outcasts fighting off a few Supermutants. Help defeat the muties, and you’ll complete the first of OA’s four missions – netting yourself some XP, and an Achievement to boot. Consider this your reward for just showing up – and in the case of PC players, for wrestling with Games For Windows.

Once the mutants are dead, the Outcasts will ask you to help them crack open a weapons storage facility they’ve been trying to break into. The only way to get in is to complete a military training simulation of Operation Anchorage – a famous historical battle that saw US troops defending Alaska from invading Chinese troops. The Outcasts warn you that this is a “safety off” simulation, so if you die in game you’ll die for real; but if you survive you’ll get a share of the loot.

What this essentially means is that you get to play through roughly four hours of Fallout 3 vs Call of Duty: Winter Edition. All role-playing elements of the game are completely scaled back, resulting in a simple first-person shooter with added VATS. There’s very little in the way of pick-ups: ammo and health are now dispensed via little machines dotted around the maps, and because your enemies disappear when they die, it’s impossible to loot corpses. As a result of these changes, and the fact that you are now fighting Chinese soldiers, it’s quite remarkable how different it all feels from the Fallout 3 we know and love.

Unfortunately, in this case being different isn’t a particularly good thing. Aside from the fun and games of VATS, combat was never Fallout 3’s strong suit. Your enemies are as brain-dead as ever, and the chances are that you’ll cut through them like a hot knife through butter. While you don’t have access to any of your old equipment, your in-simulation character retains the same stats as your “real-world” adventurer – and indeed it’s possible to level-up while you’re playing. If you happen to be at a reasonably experienced stage when you join Operation Anchorage (we used a save at level 15) then you’ll barely bat an eyelid, never mind break a sweat.

Indeed, you’ll find Operation Anchorage a particular cakewalk if you make use of its shiny new toy – the gauss rifle. As veterans of Fallout 2 will know, the gauss rifle is a super-destructive weapon that uses magnets to accelerate its bullets. In this incarnation, the rifle is a scoped single-shot weapon that does even more damage than the UFO Handgun. It also boasts a rather neat shockwave effect that sends your opponents flying – so in the rare event that they survive a hit, they’ll be in no position to fight back. You’ll pick up the gauss rifle in OA’s first assignment, a mission that sees you sabotaging three artillery guns at the summit of a clifftop base.

After a brief and half-hearted attempt at encouraging stealth tactics, everything goes Rambo and Bethesda teams you up with a NPC who fights alongside you. In truth you don’t really need his help, but his anti-Commie tirades are quite entertaining. Then in the second phase of Operation Anchorage you’re placed in charge of a squad of up to four soldiers and/or robots. You can choose what weapons they take, and what you yourself are armed with, but other than that your control over the squad is very limited. Your task in this second stage is to attack and capture two locations; you can tell your men to meet you at either one, and then you can tell them to attack or to wait for a bit. That’s pretty much it – you can’t give orders once an attack has begun, but you can order in new troops if any of your guys kicks the bucket. This certainly has its uses: when our sniper stubbornly refused to leave a building, we simply executed him then went outside and asked for a new one.

Once you’ve captured both locations, your squad is taken away from you and you’re sent on one last assault. And then it’s over. You leave the simulation and go back to the wasteland, whereupon you gain access to new weapons and a few other toys. Aside from the gauss rifle, the best of these presents is the cool-looking Chinese stealth armour that cloaks you when you crouch. The Crimson Dragoon warriors who wear this gear are actually the most interesting opponents you meet during Operation Anchorage – sneaky melee fighters who attempt to take you down in Predator fashion. Unfortunately, these guys also show off a slight lapse in gaming logic: while cloaked, the Dragoons can just about be seen as weird vision blurs – yet VATS is unable to target them. This results in a weird situation when you have to randomly spray at them until they show up. They’d probably be a bit easy if you could VATS them straight away, but it feels like a bit of a gaffe, nonetheless.

There are other things that don’t make sense (a training simulator that kills you?), but the larger problem with Operation Anchorage is that it simply lacks the immersion-factor that makes Fallout 3 so addictive. The Alaskan scenery is admittedly very nice to look at – particularly the cliff-based sections – but the actual gameplay itself is pretty shallow. The battles are longer and larger in scale than your standard wasteland scrap, but they’re far less involving. You’re no longer playing a role, you’re simply going through the motions of yet another FPS. The whole experience will last you about three hours, and once it’s complete the simulator locks itself off. There’s a minor perk you can gain by collecting intelligence files dotted around the maps, but if you’re going for it you’d better do it first time, since there’s no going back.

This all sounds a bit doomy and dour, but the truth is that Operation Anchorage is neither brilliant nor terrible: it’s simply a sidestep that doesn’t quite work. It’s linear, simplistic and extremely un-Fallouty, but it does have couple of decent items and it offers a fresh change of scenery. If you think that’s a fair swap for 800 Points, then go ahead and try it. Personally, we’re not entirely convinced. Let’s hope that the next two DLC packs, The Pitt and Broken Steel, fare better.

The truth is that Operation Anchorage is neither brilliant nor terrible: it's simply a sidestep that doesn't quite work.
6 An interesting concept, albeit a bit of a weird one. The gauss rifle is excellent fun. Lacks the sense of adventure that made Fallout 3 so enjoyable. A rather shallow experience.