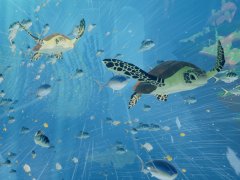 I went snorkeling in a mexican lake about 4 years ago. In that lake, hiding under the wooden stairs that gradually lowered you into the water, was a massive fish. A massive fish with huge, sharp teeth. I didn’t get in the lake at that point, instead choosing to walk to the next set of steps. On the same holiday I also got attacked by a tiny fish in the sea just off a glorious beach on the Riviera Maya. As essentially the Bear Grylls of the sea, I know its dangers. Abzu, often referred to as Journey under the sea, is also home to danger.

Yet, the sharp-toothed monster fish made no attempt to hurt me, and the tiny little thing that bit me was probably worried I was moving into his territory. Abzu sees you playing as a deep sea diver, discovering the secrets hidden beneath the water’s surface. You’ll encounter creatures big and small, but there’s a beautiful sense of natural harmony here – everything having its rightful place in the ecosystem. It’s a world the diver isn’t really part of, or is she?

There are no clear cut answers in Abzu, and the story that’s here is slight and must be pieced together by the player. Gameplay feels effortless: you guide the diver around, interact with things with the push of a button, increase speed with another push of a button, and hitch a ride on sea life when you feel like it. There’s nothing taxing here, no puzzles, no combat, no player death. You must do things in order to make progress, but these are never tricky and always pretty obvious.

Abzu is about discovery, learning what tale the sea has to tell and experience the underwater world. And what a gorgeous world it is. While the low-detail modelling can give the impression of a basic looking game, the style itself is wonderful and the colourful sea environments a real work of art. Play with a pair of headphones on and you’ll be completely immersed, the sounds of the sea paired perfectly with one of the best soundtracks you’ll hear in video games this year.

It’s a shame the game isn’t one seamless experience (load times break up ‘levels’), but there are plenty of large areas to explore. An initial playthrough will only take between two and three hours, making Abzu a single-sitting game, but chances are that run will see you missing many of the hidden items. On my first completion I didn’t see a single collectible, which are only found by straying from the obvious path through the game, while I’d overlooked numerous other notable items to interact with.

I’ve been deliberately vague about some details in Abzu, as it will pay to go into this without knowing everything. What you should know is that this is a lovely, memorable experience. It’s a simple game (there’s no upgrade system, no combat, no inventory) that sees you swimming around and seeing some awesome sights. This is as much a diving sim as Journey is a hiking sim.

While Abzu is easy to recommend, something about it didn’t quite connect with me. I think it’s the player character and my attachment to her. Although there are moments of wonder in Abzu, emotion is rare and it left me distanced from the character. In Journey, a game almost impossible to be left out of this conversation, there was a real sense of character, personality, and feeling. Few games deliver this, but had Abzu managed to enliven the diver to a greater degree, the entire experience would have been elevated to truly great status.

Abzu didn’t leave the same impression that Journey did, then, but it’s a game I played through twice in the space of 12 hours, and I’ll play it again. The world created here is a testament to where we are with video game development and the game as a whole shows how diverse the medium can and should be, even if it’s not quite as emotionally resonant as it perhaps could have been.

Abzu is a testament to where we are with video game development and shows how diverse the medium can and should be, even if it's not quite as emotionally resonant as it perhaps could have been.
8 Gorgeous visuals Effortless gameplay It's very brief A slight disconnect between player and character 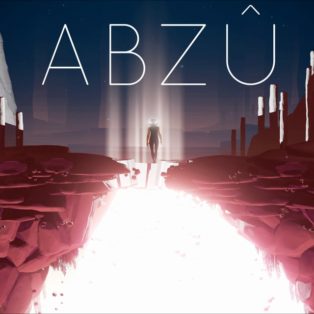