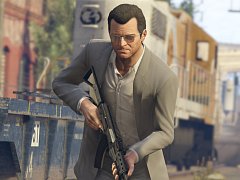 Updated on June 5, 2021 by VideoGamer.com Staff

Editor’s Note: Below is a rundown of the technical accomplishments of GTA 5 on PS4, and how they affect the game itself. Also featured is an overview of the first few days of GTA Online, which suffered a troubled launch on last-gen. For a review of the PS3 version of the game, which delves deeper into the story, characters, and main campaign, (which are all unchanged), click through to Simon’s review.

The best version (so far) of one of last-gen’s finest games, GTA 5’s remaster is testament to how much difference a graphical overhaul can make, even just a year after release. Rockstar’s ability to render worlds that are caricatures of real cities, yet somehow more authentic than shot-for-shot recreations, is based on details. With this remaster those details have been refined, expanded, and improved.

The headline new feature is the first-person viewpoint, accessible at any time by cycling through camera options using the touchpad. What seems at first to be a gimmick is in fact the best way to appreciate the sheer amount of work that Rockstar has put into this re-release: it’s as close as possible to not just the look of LA, but also the feel. Down at eye-level, you get to grips with what Los Santos is really like. Those of you that have been to its real-life inspiration will already know: a combination of beauty and despair, a desert metropolis where parts of it reach for the stars, while others are left to rot in the sun.

Walking around the world is a strange experience, familiar yet alien, digital tourism with a side of ultra-violence. And it is ultra – fist-fighting and shooting in first-person brings a whole new immediacy to your actions, and one that may very well make you think twice about partaking in them.

There’s a weight and force behind your movements – it’s not perfect, sometimes feeling sluggish (we recommend turning head bobbing off – just one of the many control and camera options so you can tweak first and third-person combinations to your desires). But when you connect with the world, be that with a punch or being thrown clear from a motorcycle wreck, you feel it rather than just witness it.

It may seem odd to be this affected by seeing through your character’s eyes, especially since it’s been 21 years since Doom came out and popularised a first-person revolution. In that time we must have killed more people in first-person than Bret Easton Ellis, but whereas in some games you feel like a gun attached to a floating camera, here you feel like a person on the street, connected to your surroundings. Falling out of the sky after bailing out of a plane and forgetting my parachute, the horizon spins horrifically: disorientating, panic-inducing, physically authentic. That’s how solid an anchor it is to the world around you.

Rockstar could have just tacked the first-person on, of course, but again it’s the attention paid to the finer details that makes its world so appealing. Cornering on a motorcycle will see you lean into it, shifting your weight on the bike. Planes can be flown by reading their working instruments. On the ground, you’re closer than ever before to the detritus and overbearing infrastructure that plagues LA – discarded Big Gulps, cracked and potted streets, sun-damaged and crime-addled neighbourhoods wrecked with graffiti and gangs, puke-neon tinged car dealerships – are rendered with a realism not yet seen before.

This is made possible, of course, by the jump to 1080p and the extra grunt the new machines offer. GTA 5 was a beautiful game on 360 and PS3, but on PS4 it’s something else entirely. Walking the streets of Los Santos and walking the streets of LA are essentially the same experience, thanks to the superb texture work (generally – some interiors can look a little flat), much improved draw distance and pedestrian and car density. As impressive – and important – is the superb lighting: Rockstar has nailed daytime LA’s sense of unreality, a place so dedicated to artifice that that even the sky seems fake. That the frame rate was rarely troubled in my time with it so far is scarcely believable.

Other changes are smaller, but feed into the overall picture. New songs blare from the radio, and the touchpad can be used to to cycle through items you’ve acquired, such as clothing. While the campaign itself remains the same, it’s apparently been tweaked to reduce frustration in certain sections (although it must be said that we did not encounter any moments that seemed much easier).

By now you’ll have almost certainly made your mind up on GTA V, and probably this remaster as well. If you enjoyed it the first time around, you’ll love it even more. It’s worth double-dipping just to walk around in the world.

If the somewhat pat dialogue, misogynistic leads, poor representations of women and frequent hard violence didn’t appeal before, they won’t now. But while nothing has changed in the story these characters tell in cutscenes, the new tech has changed a lot about the story you make out of them.

Has GTA Online been fixed for new-gen?

Nowhere near as unstable as it was in its debut week(s) on PS3 and 360, new-gen GTA Online is solid, exciting, and still a little likely to fall over. Prone to disconnecting players (although, in my experience, only after a mission has finished), there have also been times where the service has kicked me out and then refused to let me back in, hanging at around the 90% loaded mark.

Once in a game, GTA Online is as enjoyable as you would hope. I didn’t import my character, instead opting to start fresh, and the character creation and early stages are much more streamlined. Out goes the grind of just doing PvP until co-op Jobs arrive with regularity: instead, I was offered a non-competitive mission stealing a van with three other players almost as soon as I’d started, and more followed soon after.

It makes the early going much more enjoyable, welcoming players that want the multiplayer GTA experience without a side of constant worrying bigger boys will stomp you into dust. I soon began climbing the ranks, and on the whole it was far less painful to be a low-level hood this time around. Following a little help from a pre-order code that dispensed $500k to spend in game, I was sitting pretty in my massively ostentatious apartment, and GTA Online really had its hooks in, as I tore around like some mixture of property developer and stone-cold killer. So, a gangster then.

Also of note is that the world now feels a lot more populated with traffic, NPCs, and other players (now up to a max of 30), dramatically boosting the sense of place. Work needs to be done, but so far Rockstar is far closer to realising its lofty ambitions for multiplayer GTA than ever before.

The best version (so far) of one of last-gen's finest games, GTA 5's remaster is testament to how much difference a graphical overhaul can make, even just a year after release.
10 The best version so far!