The Cyberpunk 2077 demo was gorgeous, so let’s hope it’s not all smoke and mirrors

Expectations are, frankly, way over the top for this one – the combination of coming from the studio behind the Witcher 3, CD Projekt, being based on a beloved license in the shape of Cyberpunk, and having been revealed years ago before having literally nothing else shown of it for years, means it's subject to what we in the business call ‘loads of hype’.

And yet, after a 50-minute hands-off demo – a member of the development team sat and played a section of the game for assembled gawkers – it’s easy to believe Cyberpunk might just live up to the hype. It is nothing short of spectacular, mixing influences from some of the greatest games with the visual flair of the original tabletop Cyberpunk universe.

So what actually is it? Well, it’s a first-person RPG. Aside from sections where you’re controlling vehicles – more on that in a bit, if I remember to write about it – and some cut scenes, the action plays out from inside the face of one V, our (anti)hero of the tale.

V is customisable – gender, looks, hair, piercings, tattoos, it’s all tweakable. Add in the classic RPG elements of giving her a backstory and other motivations for being in Night City, where Cyberpunk takes place, and you have a delicious, filling recipe for an RPG that feels a lot like an actual RPG, and not just an FPS with a different hat on.

That level of choice extends to the game proper, with decisions big and small greeting V as she makes her way through encounters with dodgy individual after dodgy individual. Seriously, this future is a dodgy future. Everyone’s so shifty. They should have called it Shiftyp… no. No, they shouldn’t have done that. That would have been rubbish.

Anyway, our adventure with V saw her taking down a building full of ‘scavs’ – scavengers to the uninitiated – who make a living out of kidnapping people, harvesting their organs and then selling them. It’s a craft, I suppose. After rescuing a specific target, and enduring an oddly uncomfortable scene where the naked woman is carried out with one breast gratuitously lolloping about at the bottom of the screen (but hey, at least it’s not collecting women by sleeping with them, so that’s progress) the target is extracted by needlessly aggressive medical professionals and V makes her escape.

Day two in the Cyberpunk house, and V is informed of a new mission – a high value spider drone is wanted by a local naughtyman (not official terminology), and how she goes about it is up to the player. The method we saw involved borrowing money from a corporate worker and using it to buy the drone, only to discover some subterfuge had indeed been involved and, well, everyone had to be shot in the face.

To go into more detail would be to ruin the joy of discovery for you, the gorgeous lovely reader of VideoGamer – but one thing I’m more than happy to talk about is the constant, almost badgering way Cyberpunk makes sure you know what you’re doing, makes sure you’re aware your decisions have consequences, and makes sure you know you are free to change your mind. 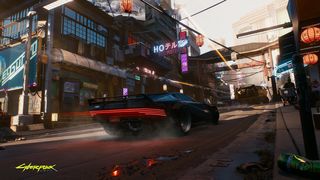 I think I’ve made it sound annoying, but it’s nice and reassuring – choices, at least as shown in the demo, aren’t instant and final. It’s fair to assume sometimes they will be, but these bigger ones and those involving quests are open to changing on the fly. It makes things feel less binary, and it makes me think Cyberpunk will see people playing in a far more experimental way than they otherwise would. Because sometimes when you’re presented with the chance to shoot some half-robotic man in the face on a whim, you just have to take it.

Oh yeah – driving. See? I remembered. Aren’t I great. Okay, so there was a point in the demo where V took a future-car out for a spin. It’s safe to say this iron horse will be your version of the fleshy horse from the Witcher 3. That’s cool, that’s notable – but what’s more notable is, on moving to a third-person view, I was utterly struck with how this looks and feels like a futuristic GTA, just with way more choice and slightly less hatred of women.

Those influences run to the core, and don’t just include Rockstar’s favourite baby: Cyberpunk is absolutely riddled with Deus Ex, the Witcher (of course), Fallout, even a slice of Borderlands. There’s more, too, but again – voyage of discovery and all that. If your ears pricked at the mention of any of the above, though, you’re likely to be paying very close attention to Cyberpunk for some time to come.

Said time to come may well be a while, too. Nothing’s been said for sure either way, but CD Projekt stating it’s ‘aiming for’ Xbox One and PS4 (and PC, obviously) does spark my quizzical gland. Because Cyberpunk looks good, and it looks good enough to not be a game from the current generation. Would I be surprised if it launches on PS5 and Xbox Two? No. No I would not. Would I be surprised if this causes PC owners to remark on the fact their machines are more powerful and upgradeable than consoles? Also no. No I would not.

It’s safe to say I’ve bought in to what Cyberpunk is selling, but there’s still that element of cynicism picking away at my brain. And it’s for one simple reason: everything we’ve seen of Cyberpunk so far has been controlled.

A trailer and a hands-off demo – two things that can be riddled with smoke and/or mirrors, and a few cheap tricks under the hood to make it look like it’s doing better than it is. I’m not saying that is the case, just that we should be cognizant of it until folks outside the studio have been able to play Cyberpunk and report back.

But then, maybe that’s just a side effect of seeing a demo so utterly mindblowing. Maybe I’m just in denial. With the above caveats firmly in place, the simple fact is Cyberpunk 2077 is looking like it could be another gem from CD Projekt. A grimy, stinky, dodgy future of a gem. 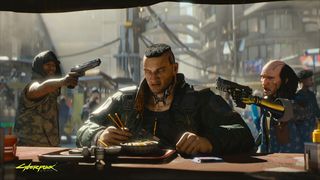 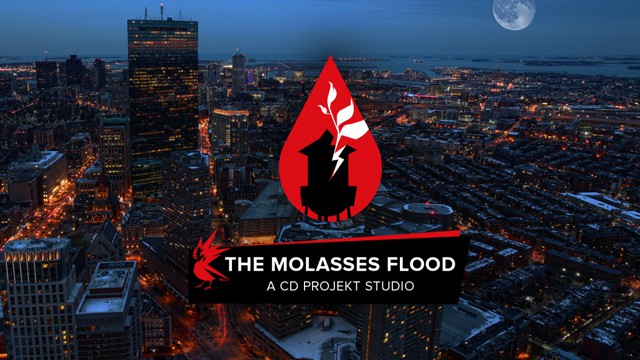