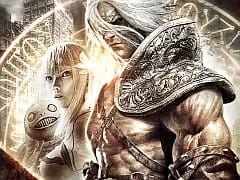 NIER looks interesting. It’s a Square Enix RPG with lashings of blood and more swearing than an episode of The Wire. Oh, and it’s got a hermaphrodite character. Really. Doesn’t sound very Final Fantasy, does it? No. But, like we said, it is interesting, and in this age of sequel-itis, interesting is more than welcome. With a notepad full of questions we hit the phone for a chat with executive producer Yosuke Saito, and discovered that there’s more to NIER than blood and guts.

Yosuke Saito: Both I and the director personally love God of War. We didn’t necessarily set off to make an action game with a feel of God of War.

Q: I thought God of War wasn’t popular in Japan. What is it about it that you like?

YS: You may be right by saying that God of War was not particularly popular in Japan. But both the director and I adore this game, partly because of the different type of gameplay seen, rather than just the repetition of the same gameplay on and on. For example, if you have to fight against a huge boss, the game design is different. So even though it’s an American game, we felt that it caters to the needs of Japanese gamers.

Q: The game’s central character, NIER, has been slightly redesigned for the western release of the game. How has he been changed, and why?

YS: When we were still in the developing stages, we had a lot of meetings with our branches in America and Europe, possibly more often than any other project I’ve been involved in. In those meetings we heard that if the protagonist is quite a slender, more boyish character capable of defeating lots of big monsters one after the other, it would look a bit strange to the eye of the Western gamers. So we designed NIER to make him more buff, more macho, more of a muscular guy.

YS: Grimoire Weiss is involved in the full story, so if I were to tell you everything about him, maybe that would unlock some of the mysteries about the story itself. NIER, although he’s always capable of wielding a sword, initially he’s not able to cast any spells. But by turning to Grimoire Weiss and making use of his power, he is able to cast spells. When Grimoire Weiss encounters NIER, he can’t remember what his goals are and what he has to do in his life. As Grimoire Weiss manipulates NIER he gradually brings back the memories.

Q: NIER is bloody, violent, and contains lots of swearing, which is unusual for a Square Enix game. Why have you taken this approach? Was it to appeal to Western gamers?

YS: We didn’t actually mean to specifically appeal to Western gamers by including swearing and bloody themes in game. I’ve always been under the impression that Japanese games kept themselves back from that sort of quite direct expression. We only implemented these expressions when it was natural to use this theme. Lots of media people have mentioned the foul mouth of Kaine, the female character. But even though she does swear and she does use some quite unwomanly words, if you know the story, eventually you’ll find that particular part of her character quite loveable.

Q: When exploring indoor environments, the camera switches to a 2D sidescrolling perspective. What does that bring to the game?

YS: That particular art direction has got a direct connection with the story itself. There is the more realistic modern aspect of the world. On the other hand, the world in which NIER lives is quite fantastic and farfetched. We wanted to accentuate this gap between real, modern scenery and the fantasy world. Why should there be this gap? That will remain a mystery until you find out in the game. We made use of these different types of views to help tell the story.

Q: The game features a hermaphrodite. Why did you include such a character?

YS: There is quite a simple story behind that actually. One of our development staff, a planner – actually she’s a female planner – she came up with the idea, saying it would be interesting if we were to have a male heroin. Other people in the room responded quite nicely with the thought, ‘yeah, that would be quite a novel idea’. We didn’t have any particular intentions in creation of this character. We just get a bit carried away, if you like.

Q: How difficult is it to retain NIER’s Japanese spirit while also appealing to Western gamers?

YS: When the project kicked off, we had this strong consciousness that it had to be a game that catered to all the pallets of worldwide gamers, but as time went on, our priority changed. Eventually, we wanted to create a new Square Enix RPG, with anything that would be very interesting, great fun and pleasurable to play. Yes, we did experience lots of challenges and hard times in terms of creating something new and interesting, but not necessarily something that would be popular among worldwide gamers.

Q: What is it about the game that brings something new to the traditional Square Enix role-playing game?

YS: As you know, most Square Enix projects at the moment are Final Fantasy and Dragon Quest and various other command-based RPGs, mainly, as opposed to Kingdom Hearts for example, which is an RPG with lots of action elements. But Kingdom Hearts is for a younger demographic. We wanted to create an RPG with lots of action elements that would appeal to gamers who’re slightly older. That’s why we made the protagonist a man in his late thirties, which is quite a rare case as far as Square Enix is concerned. Square Enix hasn’t created many games for this demographic before. Therefore we put in lots of blood and gore, and quite strange characters, and quite a unique in-game universe. It was a bit of a challenge, but because the people who created the game are all middle-aged already, it was fine.

Q: The game has been described as a new direction for Square Enix. Are we likely to see more action-oriented games of this kind from Square Enix? Is there a chance that we’ll see a NIER sequel?

YS: Regarding RPGs with lots of action elements, yes. In Japan an increasing number of users are not necessarily satisfied with command-based RPGs. They turn to other genres. So, I would expect there will be more and more great RPGs coming out of Square Enix with more action elements. As for a sequel, if this game proves successful in Europe and America, we would definitely consider it.

YS: Personally I think it was not quite accurate to say it is over as such, or finished. But on the other hand, it was some time ago, many Japanese game creators almost took for granted that they were regarded as number one in the world. Obviously that time is long gone. Now we see the pressure to make games that appeal to all markets in the world. That kind of consciousness is a good thing.

Q: Finally, what do you think of Final Fantasy XIII?

YS: Of course I would say it’s a very visually wonderful, great game. Lots of game creators I know have been involved in its development, and I witnessed them going through child birth if you like. I must say it’s a great game.