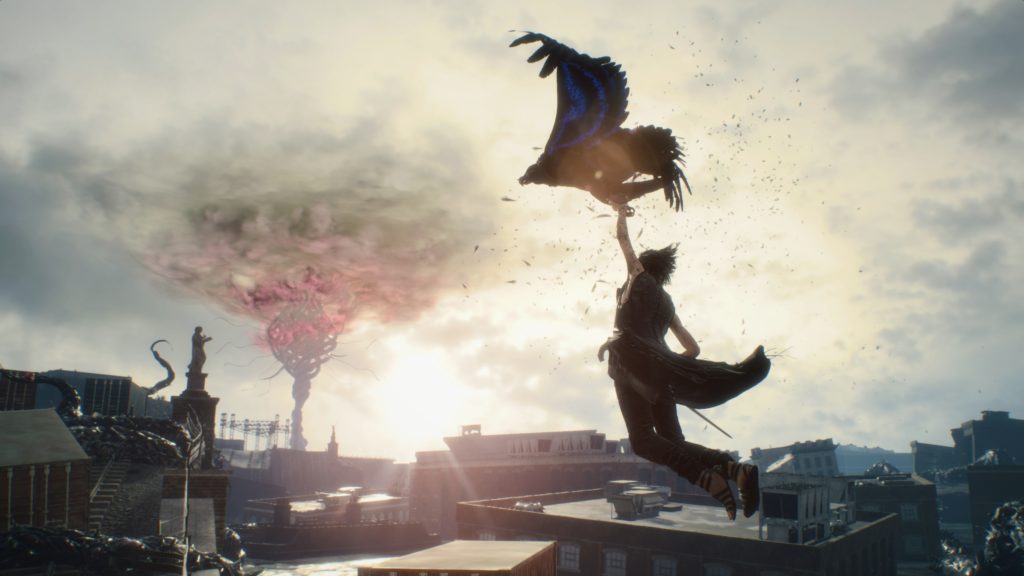 Devil May Cry has always had a delirious, near-nuclear sense of style. The ice-white hair, the coats like curtains, and the one-liners: it’s as if Karl Lagerfeld were cast as the hero of an ‘80s action movie. Since the inception of the series, style has been its main preoccupation. It wears its coveted ‘S’ rank like a cheesy gold watch – a sense of killer kitsch that can only be achieved with the most over-the-top tactics. Any crying The Devil might do will likely be at the graveside of subtlety.

As such, I think it took all of three minutes for me to fall for Devil May Cry 5. At the game’s outset, Nero and his associate Nico tear along in a white van – a peculiar choice of vehicle, you might think, until you realise it’s in keeping with the setting. The game takes place in a pastiche of Britain, and there’s panic on the streets of Red Grave City. (I look forward, when the game is released, to exploring the neighbouring towns of Giel Gud, Ash Croft, and Laughton.) Lacking a sufficiently sized can of Raid, Nero leaps out the passenger window to deal with these insects the size of horses, and does so in slow-motion.

None of this, I should say, was my doing; it was all contained in a cut scene, the likes of which – in a similar fashion to the Metal Gear Solid series – provide both a reward for hard-won progress and a model of impossible extravagance to aspire to. When control was given over to me, I dragged Nero down to earth, below the looming shadows of Red Grave’s Gothic spires, and had him clattering about like a clumsy pest control worker. 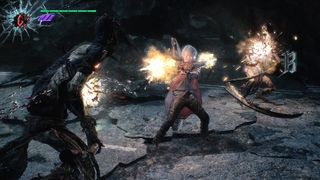 That duality – between the grit on ground level and the beauty above – was what inspired the game’s director, Hideaki Itsuno. He told me of his love for London at a recent Devil May Cry 5 event in the city. ‘[I] kind of fell in love with this architecture – the way you have, in London, you look at everything from the second floor, and all these buildings have this beautiful Gothic architecture. Y'know, there’s clearly history to all these buildings. But then you look at the first floor, and [there's] a McDonald’s, and cell phone stores, and all this modern stuff.’

Exactly what that is remains an elusive formula, but Itsuno emphasised the grasp that Ninja Theory had on the series’ identity. ‘[I] got a chance to come out here and visit them a lot and sometimes they came out and visited us, and we would talk a lot about “what makes a boss fight? What makes a game Devil May Cry? What kind of game design should you implement?” But from that we learned so much from them, because they know what style is.’ 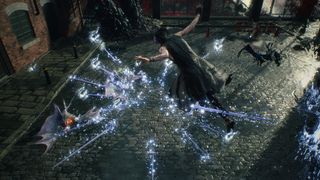 Indeed, fans of the 2013 reboot, which now lies in a cocoon of its own canon, will notice the feel of Devil May Cry 5 – its essential style – cuts a path between that game and the wider series. ‘Their art direction is amazing,’ says Itsuno. ‘You don’t see that anywhere else in the industry – that’s how good those guys are. So we took a lot and learned a lot from them on what stylish really can be. We tried to take as much as we could from what we learned from them there and apply that to this one.’

Which isn’t to suggest that Devil May Cry 5 wants for an identity of its own; in fact, the most fun I had playing was spent with the series’ new character, V. Clad in sandals and sleeveless leather coat, scrawled with tattoos, and clutching a cane, he looks like the missing link between Finn Wolfhard and Adam Driver. I was sceptical of V at first; he speaks in an effete whisper and quotes William Blake from a book he keeps with him. He seems less suited to demon hunting than a poetry slam. But there’s more to V than meets the eye.

Specifically, three more things: Griffon, a demon bird whose beak fires bolts of energy; Shadow, a panther with close-range claws; and Nightmare, a hulking golem of oily rock that deals buckets of damage. Playing as V yields the curious sensation of being both powerful and vulnerable. ‘This new character has to be different from Dante and Nero, or else there’s no point in doing a new character,’ explains Itsuno. ‘He attacks with Shadow and Griffin and Nightmare, but he’s over here. And so there’s this balance of attacking, keeping him safe from harm, and then going in for the kill once they’ve weakened the enemies enough.’ 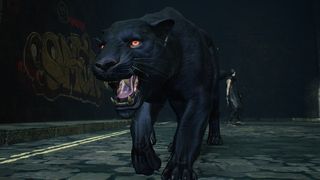 V’s place in the game’s story is also crucial, as Itsuno told me: ‘You guys playing through Mission 11 today, you’re probably not gonna see a whole lot of this, but you’ll find out as you play through more of the game that there’s a very specific story we had in mind for V.’ The story – centred on a demon named Urizen, who capably fells Dante, Nero, Trish, and Lady near the beginning – is enticing, as is much of Devil May Cry 5.

I ask Itsuno how he feels now that development is wrapped. ‘It’s pretty complex because we’ve already started working on our next thing – whatever the next project is going to be,’ he said. ‘And at the same time we’re busy doing all this PR stuff for Devil May Cry 5, and [I’ve] just been exhausted from this long development period. [I] also want to take a little bit of time off…’ Whatever his team are working on next, he won’t say, but it’s time off well deserved. Something tells me Itsuno won’t be away for long; you know what they say about idle hands.

Devil May Cry 5 is scheduled to launch for PC, PlayStation 4 and Xbox One on March 8.