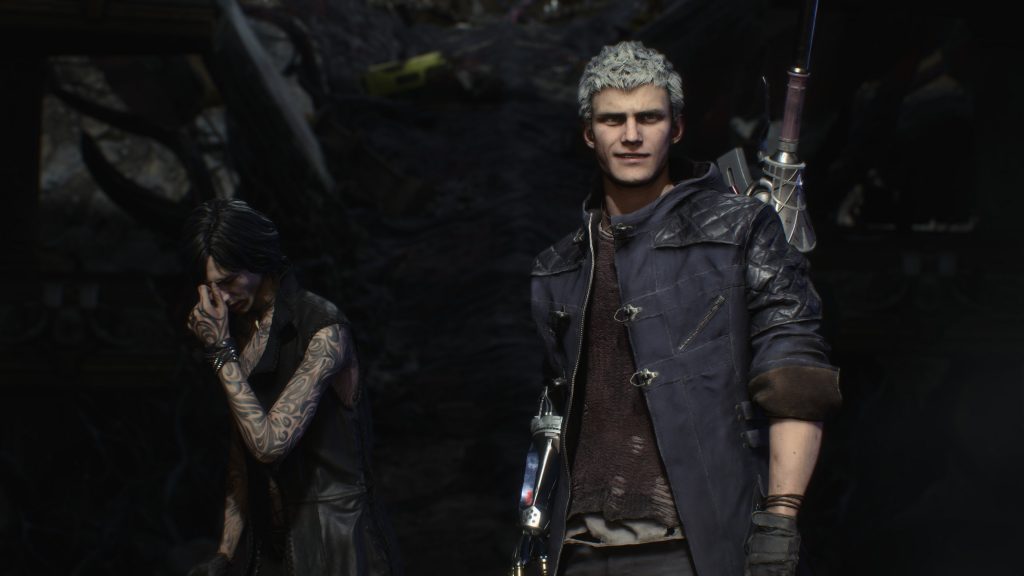 At the beginning of Devil May Cry 5, the city of Red Grave – which looks like London if it grew out its Gothic patches – is besieged by the forces of Hell. Or, more specifically, Hell’s front garden: we have brambles wrapped round buildings, a legion of infernal insects, and an enormous, bloodthirsty tree cutting upwards into the clouds. In place of a gardener with sufficiently biblical shears, we have hero Nero, who, despite having his arm hacked off, is hardly short-handed.

He has a sword with a hilt like the handlebar of a motorbike, to be revved until red-hot; a revolver with two barrels; and, just when you thought he might be over-compensating, an array of cybernetic arms, each with its own propulsive powers. These are cooked up by weaponsmith Nico, a freckle-faced Southerner who grafts new meaning onto the word ‘armoury.’ The pair have franchised their own mobile branch of the titular demon-hunting agency, and they hurtle through the streets in a white RV bearing their business name in bright blue neon. There’s no accounting for taste.

Indeed, the series has always catered to those already drunk on its particular brand of lunacy, and the first thing you notice in Devil May Cry 5 is the refinement of that madness. It’s a world in thrall to style, a world in which a team of armed police can’t fend off a swarm of demonic bugs with boring old bullets, but Nico can fell one by stubbing out a cigarette between its eyes. It ain’t what you do. Ludicrous though the cut scenes are – all pumped-up and strung out on swagger – they are to be treated as an instruction manual. 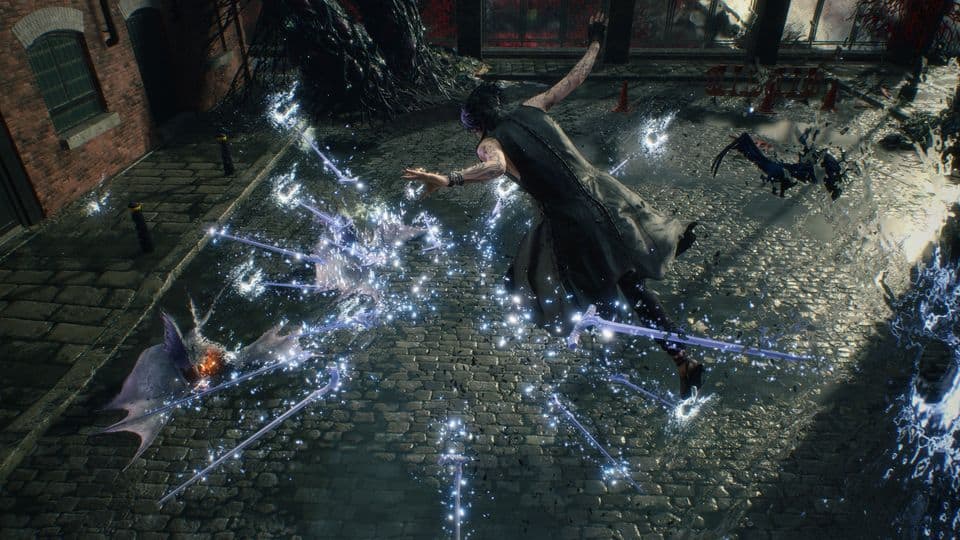 Thus the combat isn’t in service of killing but in building your combo meter – ravening up your foes and climbing from a ‘D’ rank to an ‘S’ and beyond, as a junkie might chase a high. Clashes have been tinkered with and honed, the slow, series-long improvements cut with flashes of Ninja Theory’s DmC: Devil May Cry. (That game’s dynamic camera frames the action here, and occasionally obscures it.) Each encounter is a canvas for creative violence. Nero’s grappling hooks suture together attacks across open spaces, while combination moves require precision and a good memory, and all depend on your reflexes, lest an errant claw or gnashing tooth take you out of flow.

By way of further variation, you also play as series protagonist Dante, and newcomer V. The latter is the bigger coup. V isn’t much to look at, with stringy limbs, sandals, and an oily mop of black hair. Nor is he much to listen to, speaking in the sort of coarse whisper that creeps from a hospital bed. Fortunately, he doesn’t do any fighting; he summons a trio of demon familiars to do his dirty work.

There is Griffon, a vulture that spits bolts of lightning; Shadow, a panther that pounces in for close swipes; and Nightmare, a stone golem who adopts a scorched-earth strategy. There’s a tricky tension between protecting V, who is vulnerable to all attacks, and flitting between familiars to attack from range. That he’s as compelling as he is, despite his drippy, dour mood, says a lot for the technical skill of his design. 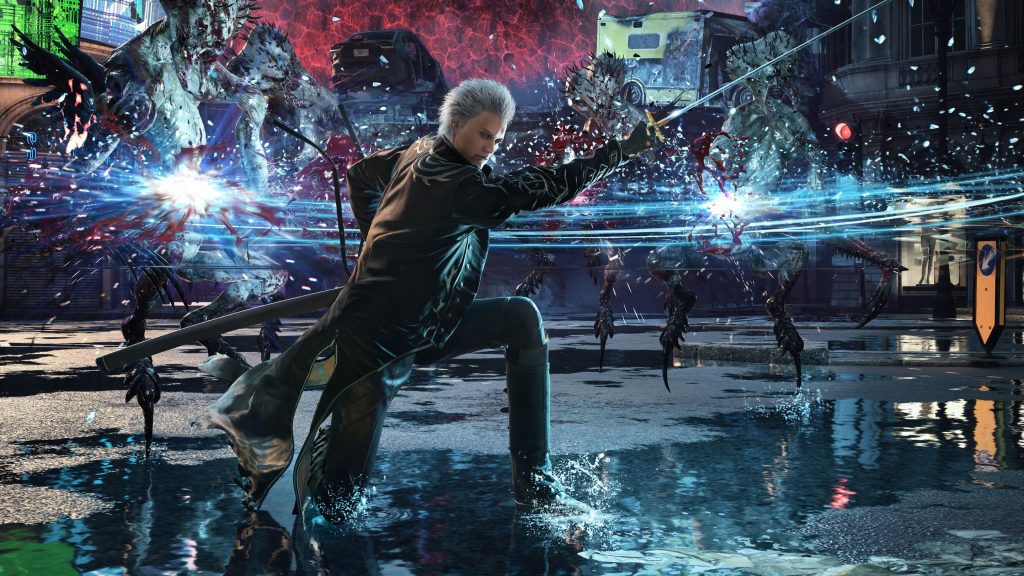 Dante, meanwhile, is as he has ever been; although, it’s worth noting that he is everything he has ever been. His signature styles – Royalguard, Trickster, Swordmaster, and Gunslinger – first introduced in Devil May Cry 3, are spread out on the D-pad, to be shuffled through in the thick of it, and his weapons are pinned to the triggers. He also has most of his best tools: the Rebellion sword and his twin pistols, Ebony & Ivory, bolstered by a trove of pleasant surprises accrued across the games. This means the potential for unbroken chains is huge, and that, if your inspiration runs dry, you need only squeeze one of the triggers to jolt yourself out of routine.

Buried in the combat is the clue to what makes Devil May Cry 5 so winsome: it makes itself  easy to love. These fights are hermetically sealed in a chamber of kitsch and camp. There is no room for remorse, as there is in, say, God of War; it revels in the inherent rightness of hitting things that are unquestionably evil, and the entire thing sings with the smack of steel on skin. The devils may cry, but you’ll spend the duration with a grin on your face. In a smart flourish, the Cameo System, which sees other players popping in and out of your game at points, has you rate their performance – it’s unobtrusive and a welcome quirk in the celebration of style.

You may wonder what could possibly warrant this much carnage, and the game does see fit to muster a plot. Early on, a message warns us: ‘A crisis looms on the horizon, the likes of which the world has never seen.’ Which is only the case if the world hasn’t played any of the other Devil May Cry games, in which the looming of anything less than the apocalypse would be considered an insult. The villain of the game is Urizen, who, despite sounding like a brand of urinal cake, is anything but fresh. He sits, glumly mouldering, on a throne for most of the game and pontificates on the precise length and girth of his power. 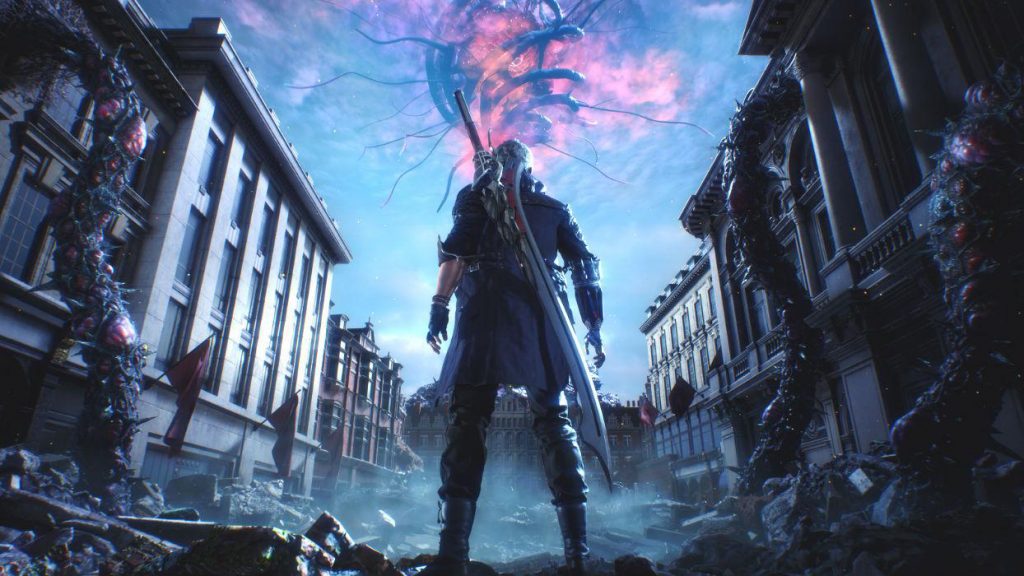 Maybe it’s churlish to gripe at the plot of a Devil May Cry game, but they do deserve to be held to at least their own standards. Ever since the sibling feud at the heart of Dante’s Awakening, it’s apparent that, scraped clean of any complexity, these games can run on unleaded melodrama. Devil May Cry 5 doesn’t manage that pathos; it’s plot is scattershot, scuppered by jumps in chronology, and marked by plot twists as stealthy as a marching band. (And I couldn’t help recoiling at some of the lines – ‘Those are two of the most badass women in the world,’ says Dante, casting aside the golden rule of ‘show, don’t tell.’)

But all that crumbles away, and you’re left with a love for the world. The game’s director, Hideaki Itsuno, has tapped into the idea that the underworld is all the more interesting when it bristles against the buildings above. When the fantasy is marooned on rocky islands, girdled by water, and stuffed into sandy castles, it loses its immediacy and, crucially, its absurdity. It’s a shame that a swath of samey late-game levels are set in the innards of a satanic tree. Especially when you compare those to the game’s opening. In those early levels there are pangs of Ghostbusters as Nero waltzes through a stately hotel, its walls awash with slime and its halls patrolled by spectres. That’s the world of Devil May Cry at its most potent.

It’s a place where trendily coiffed characters swan about with swords and guns, beating back the end of the world – and, more importantly, the onset of the po-faced – with sarcasm and slapstick. At one point, an ambulance flips through the air and comes crunching down on Nero; only, through blind luck he lines up with the open doorway and comes away without a scratch. It harks back to the moment, in Steamboat Bill, Jr., where the front of a house falls on its hero, and he’s saved in similar fashion. Few games can get away with invoking classical literary heroes like Dante and Virgil in the same breath as Buster Keaton. How’s that for divine comedy?

Devil May Cry 5 revels in its own gleeful stupidity, presenting a world in which the most valuable commodity is style.
9 Delirious, detailed combat A brilliantly kitsch sense of style Beautiful, intriguing world Dull villain and plot