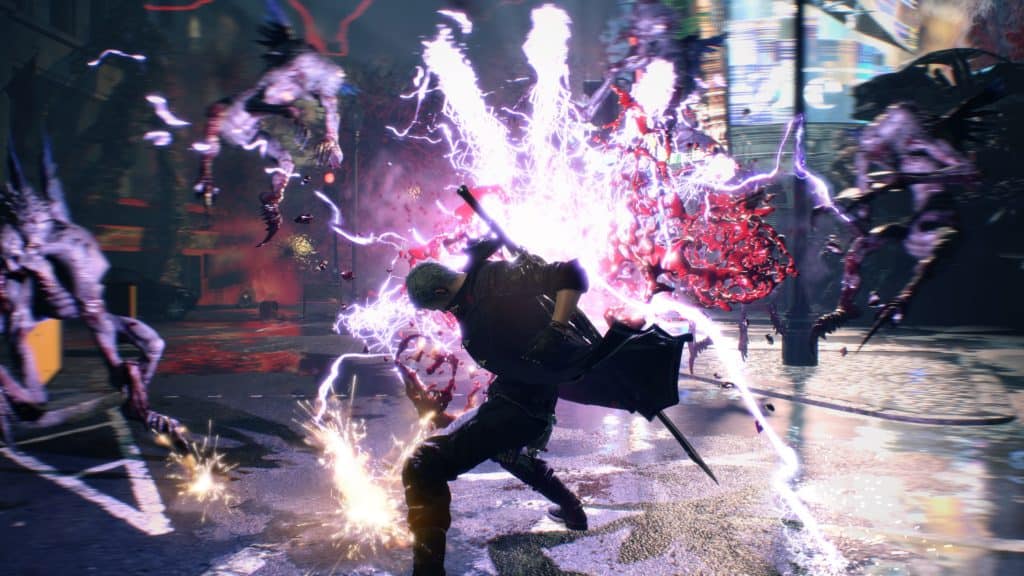 Devil May Cry 5 is suitably smokin’, sexy, and stylish

Well, if the devil doesn’t then Westminster council will; such is the damage to local infrastructure in Devil May Cry 5. Although, as a Capcom rep informs me, it isn’t London. It’s ‘loosely based’ on the capital, and the bright red of smashed phone boxes and toppled double-decker buses all catch the eye. But the architecture has been given an occult facelift: the crusty spires of Gothic buildings stab upward like stalagmites, and ledges are topped with gurning gargoyles. This being a Devil May Cry game, you wonder if they might spring to life and descend.

And it is a Devil May Cry game. Despite Nero sporting his hair in a cropped clump, à la Dante in Ninja Theory’s DmC: Devil May Cry, this game feels more traditional. The sounds, the setting, the swagger: it's more in tune with the series’ past than its most recent outing. Picking up several years after Devil May Cry 4, Nero, along with engineer Nico, has set up his own roving Devil May Cry agency, based out of a van. Nico has whipped up a handy prosthetic arm for Nero, called the Devil Breaker, which affords him a handful of powers.

The two available in the demo offer divergent strategies. The first, called Overture, fires bursts of electricity that kill lesser enemies with a single blast; and the second, Gerbera, shoots a shockwave that stops enemy projectiles in mid-air and is useful for evading attacks. Both also offer a Break Age power, which destroy the arm in favour of a one-time power attack. Overture, as if Nero were palming a primed grenade, unleashes a huge blast that deals heavy damage. Gerbera’s Break Age produces a piercing laser beam, and, when in the air, sends bouncing bolts of laser downward, inflicting damage on multiple targets. 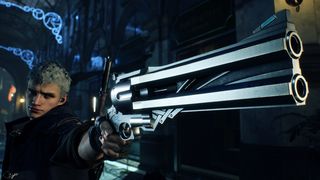 Much like the Devil Bringer before it, the Devil Breaker, in all its customisable forms, contains a whippy Wire Snatch ability that wrenches lighter foes toward Nero, and, if they outweigh him, launches him their way –  all the more useful for keeping combo chains unbroken. Whatever will be next? Perhaps the Devil Beater will follow, with Nero conjuring up weaponised omelettes, or the Devil Blender, summoning stat-boosting smoothies. Elsewhere there is Nero's sword, Red Queen, which ratchets up the combo meter and alters its output depending on the direction you lean Nero in or if you've locked onto an enemy, or if you happen to be up in the air.

The combo meter has long been a totem for the series’ creed: it ain’t what you do, it’s the way that you do it. Who wants to simply survive and win when one can look great while doing it? The meter ranges from D, for Dismal, through to A, for Apocalyptic, and tops out at SSS, for Smokin’ Sexy Style. That tells you all you need to know about a Devil May Cry game: whatever dismal apocalypse awaits the hero, you can rest assured it will be tackled with style.

That style also lives in the cinematics, which are sufficiently smoked and sexy. The cut scenes in a Devil May Cry game are a surreal pleasure; lengthy and lavish, they scratch away warmth and emotion with camera cuts and crash zooms. At the finale of the demo I played, Nero faces up to a monster the size of a cathedral, and calls it a ‘knuckle-scrapping fart in the wind.’ It’s the same trick that Dante honed to perfection – he goads you into the fight, caking on confidence like makeup over your giddy panic. It feels like a drunken friend has cajoled you into a brawl, in the full knowledge that it’s you that will have to fend off the offended party. 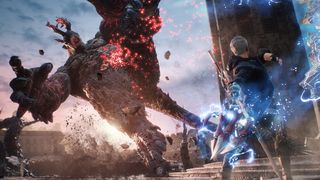 That offended party, a hulking clod of hair and rock and horn and tooth, has a second mouth on his stomach; it gapes back and gurgles magma, which he plunges his hands into, drawing back flaming gobfuls to hurl your way. Unlike, say, the bosses in recent builds of Darksiders III – which knelt on the plinth of Zelda boss design – beating this brute entails an on-the-fly strategy that lives on second-to-second basis. The Devil Breaker’s Wire Snatch keeps Nero airborne, and by dodging sideways, falling, and heaving yourself skywards, you evade attacks while hacking away at the beast’s head.

There is cause to rejoice at much in Devil May Cry 5: it’s fluid and challenging combat is swollen with strategy; its sights and sounds are seductive; and, for those accustomed to Capcom’s series, it’s a return to familiar ground. There is also the faint whiff of the road not taken. For those that gladly cut away from the series’ tone and tradition – just as Ninja Theory cut away at Dante’s platinum mop – there is a trace of something fresh that’s been lost, buried beneath layers of established style.