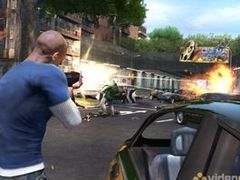 Wheelman tech to be used in new open world game

Speaking to Play.tm, Midway Newcastle designer Simon Woodroffe has revealed that the studio’s next project is an open-world game and will make use of the technology created during the development of Wheelman.

“I’m not going to talk about it too much, but it will be open-world for sure, we need to build on the technology we’ve used in Wheelman,” said Woodroffe.

He added: “… our long term plan is to reach the point where we can be genuinely competitive with the big open-world games… the gorilla in the room! You can’t do that in one iteration, you have to take steps. We’ll build our skills gradually. Hopefully what we offer in Wheelman is something a bit different. We do some things better than anyone else in this game, and if you buy this, it’ll help us make even better games in the future!”

Wheelman was released last Friday and we think it’s rather good. Find out why in the VideoGamer.com review.