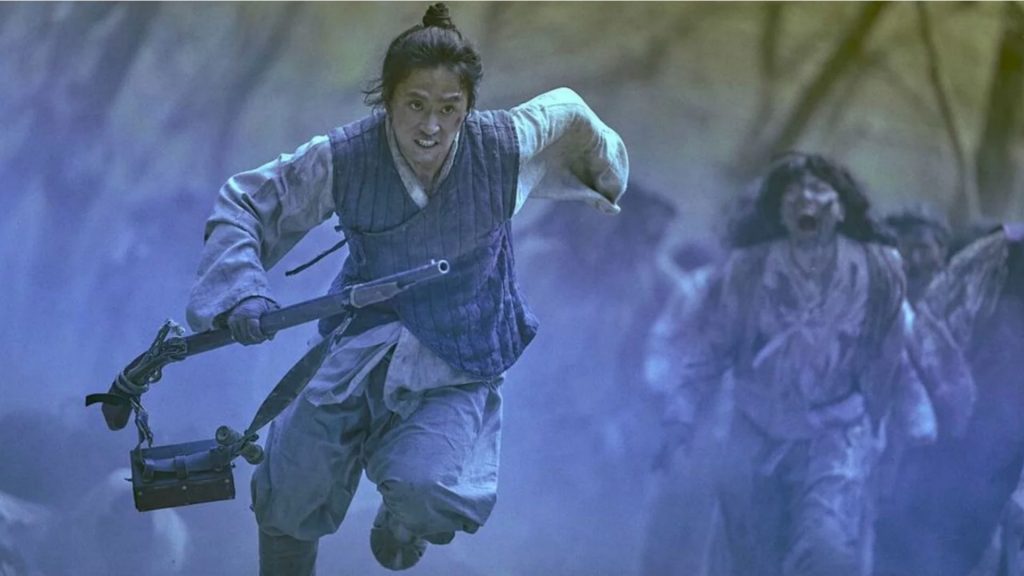 Updated on September 22, 2022 by Imogen Donovan

Kingdom is a Netflix series about zombies.

Kingdom is a Netflix series about zombies, and it’s set in Korea in the 16th century.

Kingdom is a Netflix series about zombies, and it’s set in the 16th century, and the aristocrats and the peasants are forced to work together, to survive the outbreak.

See how much more interesting that became? Like, Kingdom is very good. The acting is occasionally wobbly; I’m not sure how the royal clans are related to one another; and I’m equally unsure as to whether the Japanese invasion has happened or is happening, but it’s fun. Evidently, there are no modern weapons in that era, so they’ve got to work with what they have to keep the monsters at bay. The story centres on the crown prince, rather than a renegade or an everyman, and so far there’s been very little parading about to see whose muscles are bigger than whose.

The tropes of a zombie apocalypse become much more intriguing when used in a unique setting, like Kingdom. So, I started to think of other stories that could be told elsewhere or elsewhen. Perhaps a love story between a vampire and a human, but the human is a professional surfer in Australia and doesn’t want to give up their time in the sun. Literally and metaphorically. Or, a young fruit-seller in a faraway fantasy land, who shares a striking resemblance to the king, who passed away with no heirs. But, it turns out that it’s only coincidental, and there’s no actual relation, and they’re whisked away to serve as a monarch when all they’ve ever served is a summer berries flan. Here’s the news.

This is a big patch for Animal Crossing: New Horizons, because it adds a lot of things from the previous games that were missing. Firstly, Leif. from New Leaf, appears on the island, to peddle his wares as a merchant. He sells shrubs and flower seeds, and this is apt timing, because Nature Day has just begun. Another returning character will supply artwork for the new gallery wing of the museum. The “secret” beach at the edge of islands will function as a dock for the errant Redd, who will return to New Horizons. Players will need to keep their wits about them, though, because the Treasure Trawler isn’t the most reliable retailer.

System Shock 3 is still happening, regardless of reports on the contrary

“We’re still here,” said OtherSide Entertainment’s marketing and business development vice president Walter Somol. “We’re all working remotely right now, probably like most of you. Our new concept is coming along nicely and we are really excited about it. We have [a] cool and we think distinctive art style for it and we have that and gameplay coming together in UE4.” Speculation that System Shock 3 was going under arose earlier this year, after present and former OtherSide employees told their stories.

The accident caused appalling injuries to stunt performer Olivia Jackson, and she was placed in a seventeen day coma. When she woke up, she discovered that her arm had been amputated and she had suffered severe nerve damage and facial scarring.  “I miss my old face. I miss my old body. I miss my old life. At least I now finally have a court judgment that proves this stunt was badly planned and that it was not my fault,” said Jackson. The Resident Evil movies are claimed to have been an unusually dangerous environment with an “extremely high rate of injury for one movie or franchise.” One crewmember for Final Chapter was killed in a different accident, and another suffered injuries that meant they could no longer resume manual work.

I’m annoyed. I should have typed “rebuild.” “Bionicle:‌ ‌Quest‌ ‌for‌ ‌Mata‌ ‌Nui‌ rebuilds ‌Bionicle‌ ‌as‌ ‌an‌ ‌open-world‌ ‌RPG‌”. That would have been much better. Anyway, The game has been in development for over six years, through the efforts of a handful of dedicated Bionicle fans. The project is extremely impressive and it looks like it could be a licensed Bionicle game (from a different timeline). Combat hopes to offer a challenge, drawing inspiration from Soulslike titles for nimble dodges and blocks. “I think Bionicle managed to create a very interesting world with a very unique atmosphere that is worth bringing to the attention of more people,” said Crainy, the lead developer. “Even as a kid, I wanted to explore that world in a proper RPG, so basically with this project [I’m] making the game that [I’ve] always wanted to play since I was a kid.”

The Taiwanese president is already a fan of the game, so this is a logical leap for the Ministry of Interior. The posters feature people pretending to be Animal Crossing characters with nets and outdoorsy hats. Maintaining a distance of one metre, placing dividers between people eating in public spaces, and reducing the risk to vulnerable people are the messages communicated through this quirky approach.

Digital video game spending climbs to $10 billion due to lockdowns

Market tracker SuperData says that this is a record high for the industry, and its report attributes the surge to “individuals [who] are turning to games as a reliable entertainment option during the COVID-19 crisis and are using online multiplayer to keep in touch with others.” For PC games, spending rose by 56 per cent, to $567 million, and for console games spending rose from $883 million to $1.5 billion, between February and March. Mobile gaming accounted for $5.7 billion of the final total, but the most successful game in March was Animal Crossing: New Horizons. In terms of digital sales, the game sold five million copies, setting a sales record for the most units of a digital console game sold in a single month.

Guerrilla Games wants a writer for an unannounced open-world game

This senior game writer would “pitch compelling ideas for game quests, factions and backstories” and “write quest dialogue, systemic dialogue, story outlines and faction documents.” They would also be asked to “develop narrative designs for quests, gameplay activities and game features” while “advocating for the game’s emotional arc.” Ideally, they would have experience working on a AAA game and possess “extensive knowledge of stories and narrative design in open-world RPG games, online games, and MMORPGs.” I’m not saying it’s Horizon: Zero Dawn 2, but I’m not not saying it’s Horizon: Zero Dawn 2. The developer has been coy about the possibility, even though the game received critical praise and achieved commercial success. However, shreds of evidence do point toward a sequel, and voice actress Janina Gavankar outright confirmed its existence in 2019.