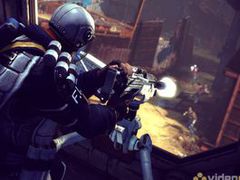 “I think we have our own community, and we’re not super public or above the radar about it. But it isn’t something we’re definitely worried about.”

Wedgwood is also confident players will respond well after actually playing Brink. Talking about showing the game off at trade shows, he said: “At every single event we had the public queue up to come along and play 16-player, no AI at all, versus. No faking it; not just coming up with the AI that give all the best possible moments. If nobody went medic, nobody was going to get revived. If nobody took the class that was going to complete the objective, nothing was going to happen. Almost every single match that I watched went down to the final minute with the container open and the sample ready to be delivered – audiences cheering their own success at the end of it.”

“These were strangers that had never played before,” Wedgwood added.

Brink has divided the critics: it’s currently sitting with a 69 average on reviews aggregator Metacritic, based on 40 reviews. VideoGamer.com awarded the game 8/10 in its Brink review, saying that “Splash Damage achieves the impossible: a game that feels fresh in the stalest of genres.”

Brink launches in the UK on Friday.