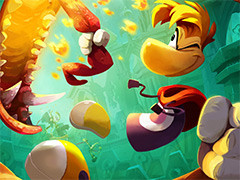 The enhanced power of PlayStation 4 and Xbox One has allowed Ubisoft Montpellier to display uncompressed textures and remove loading times altogether from the upcoming next-gen port of Rayman Legends.

Detailing the changes on the Ubi Blog, Lead Game Designer Emile Morel explained that “the Xbox One and the PS4 allows us to display the game’s textures without any compression. This makes the game’s visuals even sharper than before and will allow players to see even more of the details and nuances our artists put into the textures of the game.”

“The enhanced power of these new consoles has also allowed us to do away with the loading times when entering or exiting a level,” he continues. “Jumping inside a painting will now start the level immediately. Jumping in and out of a level has never been faster and it’s a great feeling to have such a seamless experience. Navigating in the game now feels smoother and your gaming experience is never stopped by loading transitions.”

“Porting the game with UbiArt Framework proved to be quite easy,” Morel concluded, “and the next-gen consoles allowed us to further optimize the game and make it a really amazing experience.”

Ubisoft announced that it had brought forward the release of the PS4 and Xbox One versions of Rayman Legends earlier today.