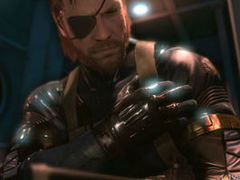 Update: The trailer has now been posted in English, but you’ll probably still struggle to figure out what’s going on.

There’s a lot going on, and quite lot of blood, but you best see it for yourself.

Konami is yet to put a firm release date on the title, actually stating “coming 1984” at the end of the new trailer.

For all things E3 2014 stick with VideoGamer.com throughout the week, starting this evening at 5:30pm BST for the Xbox Conference live stream and live chat with the team.