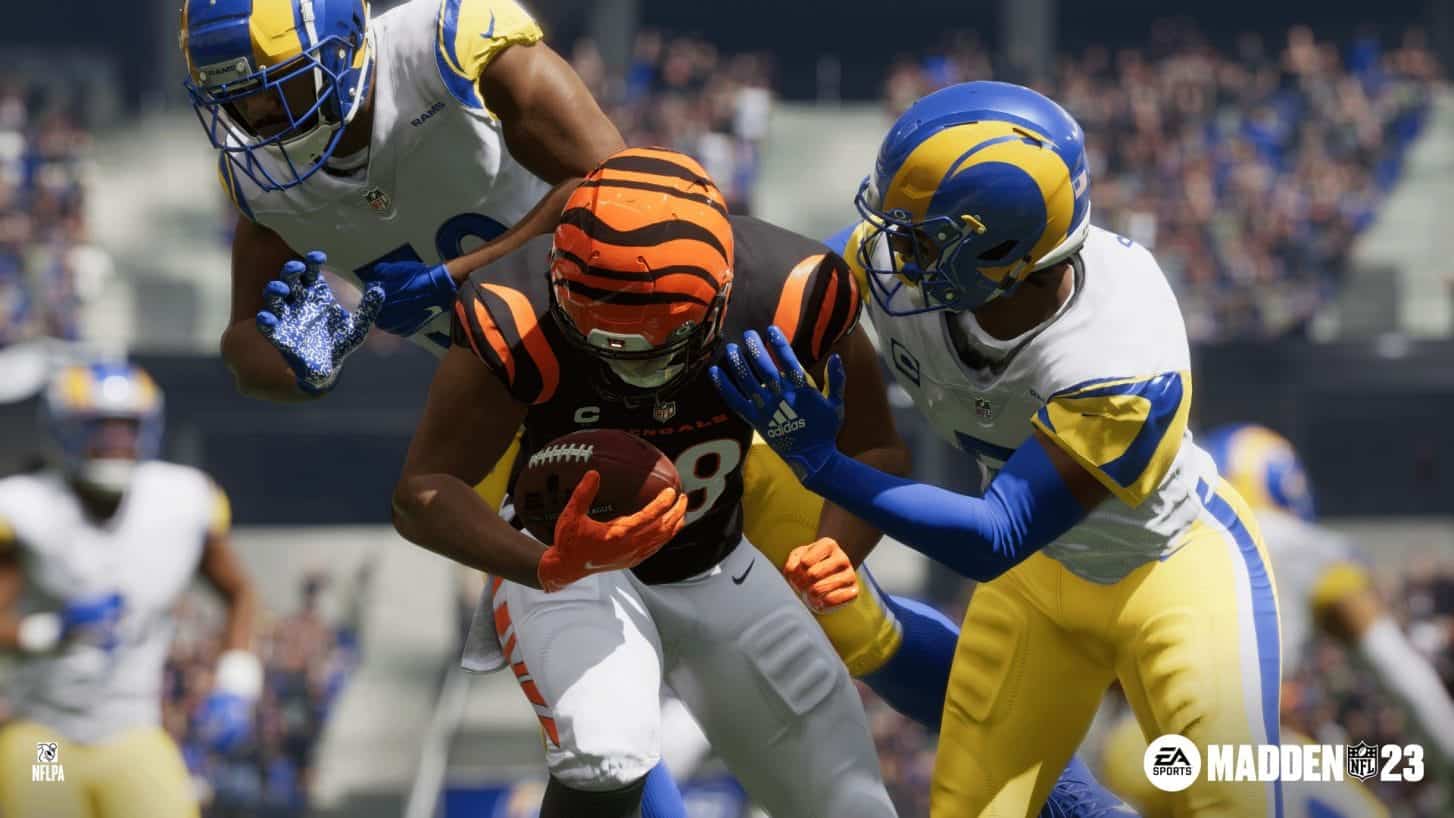 Updated on December 6, 2022 by Olivier Dumont

With Week 13 complete, it’s not hard to notice how quickly the end of the NFL regular season continues to approach. With the weeks flying by, Madden 23 has done a great job keeping up with their Team Of The Week (TOTW) reveals for MUT and today was no different.

This game week, there was tons of great NFL action as the playoff chase gets ever tighter, and we can certainly expect to see a handful of the NFL’s finest to be featured in Madden 23’s latest TOTW. But of the many candidates that rose to the occasion, fans are likely wondering who they will get to pursue for their lineups this time around.

READ MORE: Check out all the All Madden Part 3 players that were released in MUT here.

Madden 23 reveals its newest TOTW selections every Tuesday at 10:30AM ET / 3:30PM GMT on their Twitch live stream channel ‘Good Morning Madden’. The actual release in-game of the new TOTW players does take place the same day of the reveal and is usually targeted for 4PM ET / 9PM GMT.

Without further ado, let’s dive right in and check out which players made the Madden 23 Week 13 TOTW.

Offensive Player Of The Week (94 Overall)

In the Seahawks very close 27-23 win over the Los Angeles Rams, Metcalf went off, catching all of his eight targets for a total of 127 yards and the game-winning touchdown with 41 seconds to go in the fourth quarter.

The Seahawks are now 7-5 and have continued to impress on the offensive front. Though this success has been a result of several key offensive players, Metcalf has been one of the most influential and showed why once more last Sunday. Fun Fact: Metcalf stands at 6’4″ and weighs in at 235 pounds. I compared him to Calvin Johnson for a reason.

Defensive Player Of The Week (94 Overall)

The Madden 23 Defensive Player of the Week is Cleveland Browns linebacker, Tony Fields II. The Browns defense had a big day against the Texans. And despite many defensive players stepping up and playing well for the Browns, it’s Fields that stood out the most with his production.

Not only did Fields have four combined tackles on the day, but he also had a pick six, a forced fumble (which was recovered by a teammate for a touchdown), and a fumble recovery on special teams. Fields was electric on the gridiron for the Browns and this Defensive Player of the Week honor for the Week 13 Madden 23 TOTW was well-earned.

Since the Week 7 TOTW release, Madden 23 has included two Limited Edition (LTD) players for fans to acquire, one offensive and one defensive. These LTDs are always active NFL players that produced special performances in previous seasons on the same game week that Madden 23 is celebrating.

Here’s a look at the two LTDs that were selected for the Week 13 TOTW:

In the Pittsburgh Steelers Week 13 win against the Baltimore Ravens last year, Johnson had a big game, catching 8 of his 11 targets for 105 yards and two touchdowns. Because of this standout performance, Madden 23 selected Johnson be their offensive player Week 13 TOTW LTD.

In the Dallas Cowboys Week 13 win over the New Orleans Saints in 2021, defensive tackle Carlos Watkins had two combined tackles, a pass defended, and a huge pick six that he took 29 yards to the house. The Cowboys defensive tackle had himself a special performance and Madden 23 felt it was only fair to recognize Watkins as their second Week 13 LTD.

For the last seven weeks of the TOTW Program, Madden 23 has been having ESPN Fantasy Football Analyst Matthew Berry select a Hero every week.

For those that don’t know, Berry’s Madden 23 Heroes come with two versions. One is always the rating of a Hero (so 91 overall) and the other is a BND version (86 overall) that you can unlock by completing in-game challenges.

Once you collect all of Berry’s premium Hero players (all of the 89, 90, and 91 overall versions), you will receive an exclusive player reward. Fans will receive that player reward once the Matthew Berry Hero sub category edition concludes.

On that note, here’s all of the other Berry Heroes you’ll need to collect to earn the exclusive reward:

For the Week 13 TOTW, Berry chose Detroit Lions wide receiver Amon-Ra St. Brown as his TOTW Hero. In the Lions 40-14 win over the Jaguars, St. Brown had 11 receptions on 12 targets for 114 yards and two touchdowns. The Lions have now won three of their last four games and he’s been a key reason why on offense.