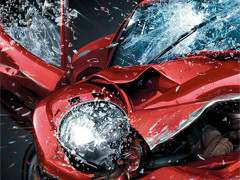 Teasing the game’s imminent announcement on Twitter, Three Fields founder/director Alex Ward told fans: “If you liked #Burnout and you liked #BLACK then you might just like this first game we’ve made at @3FieldsEnt”.

The game doesn’t feature any cars or guns, though, Ward later clarified.

While the game isn’t expected to be revealed until later this month, it’s described by the studio as an “innovative… sports game that’s fast, funny and heavy on social multiplayer”. The game is due for release later this spring.

The studio’s second game, meanwhile, will be a spiritual successor to Burnout 3 developed for PS4, Xbox One and PC. Support is also being considered for PlayStation VR and Oculus Rift.

Three Fields Entertainment was opened by Ward and his former Criterion colleague Fiona Sperry back in 2014 following their exit from EA. The studio currently lists 9 members of staff on its website, the majority of which have previously worked at Criterion.

Criterion itself, meanwhile, is still hard at work on its new first-person extreme sports title.

FPS from Criterion, the developers behind the smash hit Burnout series.

FPS from Criterion, the developers behind the smash hit Burnout series.