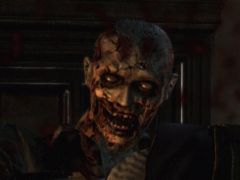 Resident Evil HD Remaster – How to unlock every ending

The Resident Evil remake, like life itself, has multiple endings depending on how you approach it/how much of a dick you are. How you achieve these endings depends on your actions throughout your journey through the Spencer Mansion. Here we break down exactly what you need to do to unlock every single ending for both characters, while remaining as spoiler-free as possible.

When given the option, give Barry his gun back, and make sure he doesn’t die at any point in the game. You must also rescue Chris from the holding cells in the labs in order to unlock this ending.

Give Barry his gun back, and make sure he survives. DO NOT, however, save Chris.

DO NOT give Barry back his gun when given the option, and rescue Chris. Barry must die during the Tyrant boss battle to unlock this ending.

Don’t give Barry his gun back, and let him die at the hands of Lisa. You must, however, save Chris. Barry’s early death will lead to a different approach to the final boss battle, which will in turn unlock a different ending.

Save Barry from Lisa, but let him die during the battle with the Tyrant, you also mustn’t save Chris.

Let Barry die at the hands of Lisa by not giving his gun back and do not save Chris. Things do not end well here, be warned…

Make sure that you save Rebecca from the Hunter and also protect her from the Tyrant during the final boss battle. You must also save Jill in a similar fashion to how Chris is saved in her playthrough.

Save Rebecca both from the Hunter and against the Tyrant, but do not save Jill to unlock this ending.

Save Rebecca from the Hunter, but let her die in the battle against the Tyrant. Jill must also be saved to unlock this ending.

Rebecca dies against the Hunter when she screams for help, but you save Jill to unlock this ending.

Rebecca dies in the final battle against the Tyrant, you also don’t save Jill.

As you might have guessed, Rebecca dies at the hands of the Hunter while you ignored Jill altogether. Bad day at the office…