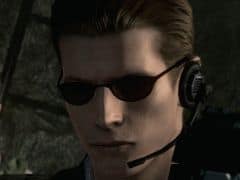 Announced last year to an unwarranted – if, given the spate of recent poor HD re-releases, somewhat understandable – backlash, Resident Evil HD Remaster may be yet another version of Capcom’s classic, but it’s also not a cash-in either. Maintaining the integrity of the original remake while attempting to make it more palatable to modern audiences, some of its measures misfire, but Resi HD is a superb way to experience the greatest survival horror of all.

In terms of core gameplay, Resi HD Remaster is much the same as it was on the GameCube nearly 13 years ago. Attempts have been made to placate those that don’t like the ‘tank’ controls, adding the option to have Chris and Jill now move in the direction the analogue stick is pushed, but this solution (to something that wasn’t actually a problem) creates its own issues. Without the weight and inertia that the tank controls give, the characters feel like they’re skating across the environments, lacking an anchor into the world and robbing it of some of its tension.

Better implemented is the new widescreen mode, which incorporates a kind of pan and scan technique to ensure all the detail, originally built for 4:3, is shown in the frame (you can still play in the original format, of course). Worrying in theory, but in practice it works: camera movement is minimal enough to be negligible after a short while.

Of the new features however, it’s the remastered visuals that will be under most scrutiny. It’s clearly not on the same level, technically, as other new-generation games, and there are issues, complicated by the ageing art and Capcom’s approach to modernising it.

Character models have been upgraded, and despite STARS members sometimes looking a little glassy-eyed are generally of a high standard (especially the zombies). The backgrounds, however – the key component on which this remaster lives or dies – are a little more mixed. Some have been rebuilt completely, such as the Crimson Head Elder’s lair, to enable Capcom to use contemporary lighting effects rather than the now outdated work-arounds the GameCube release used. Other rooms are also rebuilt or have new features, with geometry (usually in the form of foliage) and lighting effects having been added to replace the now-aged 2002 equivalents.

Some of the environments found in and around the Spencer mansion look glorious. Others fare less well: the move to HD has both shown the finer details of the art while also leaving them with nothing to hide behind. Bloom effects have been added to certain light sources, but there’s also a noticeable softening of the image in other places.

Barring a complete re-remake, these issues were always going to crop up, and are easy to swallow as part of the deal. Less acceptable are the backgrounds that are downright abysmal: the room where you find doomed STARS member Richard, brown and hideously low-res with a single blinking light, has got something of the Quake about it. It’s a disappointment, especially in comparison to the impressive work that’s gone into some of the other areas, and one compounded by the high-res 3D models sometimes clearly looking like they’re superimposed over the background. There are also big problems with collision, with zombies and the player often clipping through walls.

For me however, bar the odd moments of (unintentional) horror, none of this really mattered after about three or four rooms. Capcom has brought the game in line with modern expectations seemingly as best it could, but Resident Evil was never about pure pixel counting. Instead, it uses its backdrops as one element in a masterclass of environmental design. Its genius – and longevity – stems from a story told not just in journals and cutscenes, but in hallways and dining rooms, blood-stained bedrooms and ominous picture galleries.

Each room has character, and the cumulative effect is one of grand oppression. Like the common zombies, the mansion slowly yet surely closes in, both psychologically and physically. The backdrops are beautiful in their detailing, but they’re also expertly contrived. It owes an obvious debt to classic horror, and Mikami knows that unsettling the audience isn’t just having a man running around with Shatner mask and a huge knife. It’s in subverted normality, the familiar made alien, something Capcom nailed particularly well with the Lisa Trevor subplot.

It’s also in the pacing. Mikami’s own Resident Evil 4 is much admired in this regard: 12-14 hours of near-perfect action, constantly evolving its environments, weaponry and enemies to ensure players not only never get bored, but to pull them through the emotional wringer, a gameplay arc encompassing panic, empowerment and adventure that’s seldom been bettered. Resi remake has the same qualities, even if they’re not as immediately obvious given its slower-paced nature.

As much an old-style adventure game as a horror one, Resident Evil’s evocative atmosphere and superb environments not only enthrall, they push players to want to discover what’s coming next. From the mansion proper to the residence, to the tunnels and then the finale in the labs, each locale works as both an incentive and reward. Resident Evil may not have overt chapter breaks like later entries, but it doesn’t need them: they’re built naturally into the experience, skillfully weaved in at times when the player has exhausted their options – and perhaps patience – in their current location.

Everything in Resident Evil unfolds beautifully, each element complementing the next. Unlike later iterations, Resi remake isn’t bogged down by lore: it’s an old-fashioned mystery with a sci-fi twist, one that places the player directly in the boots of either Chris or Jill. There’s no dissonance here, no action movie set-pieces or suplexes or ‘Partner Action’. You’re in the same situation they are: scared, vulnerable, desperate, trying to make sense of a senseless situation.

Underpinning this is the game’s unerring difficulty, compounded by a lack of hand-holding of nearly any form. One mistake can see the player killed, especially upon return to the mansion, and the puzzles, combat, and save system dial into this. There’s been much wailing about Ink Ribbons and typewriters since 1996, but the relative difficulty in doing something as simple as saving your game is indicative of – and integral to – the experience. Every save should be a small victory of planning and strategy.

In fact, this is what Resident Evil truly is: a game about the place where logical thinking meets pressurised decision making. The right choice sees you live a little longer. The wrong one sees you potentially die. There’s a reason the save room music is so revered, and its echoes are found in other classics such as Dark Souls.

There will be players that despise Resident Evil, of course, decrying its controls and save states. Granted, some of its puzzles can be more than a little obtuse. And its aforementioned graphical issues grate, if only in parts. For me, however, Resident Evil remains a game as odd, unsettling, and unforgettable as its setting. The HD remaster only emphasises this.

Resident Evil remains as odd, unsettling, and unforgettable as its setting, and the HD remaster only emphasises this.
9 Environments can look great... Still as challenging and enjoyable as it was in 2002. New control scheme doesn't work that well. ...but some are atrocious.