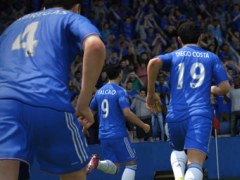 With price ranges being far wider this year than when they were first introduced, you have a much better chance of snagging bargains. The trade off is you now have to spend more time looking at a particular player before getting the best value for money.

Whenever you’re looking for a player on the transfer market, it’s vital that you compare the value of one card with the rest of them. Hitting X/Square will allow you to see every card of that player currently up for sale, and how much they’re going for. While something may look like a good deal, it’s always worth seeing if there’s an even better one lurking somewhere else on the market.

Start with a Brazilian team

There’s a lot of good quality players from the Brazilian national league and from Brazil in this year’s Ultimate Team who are available reasonably cheap, so this is a good first team to build. You can get pacey wingers, potent finishers and solid defenders, which are great foundations for FUT.

Shakhtar Donetsk has a bunch of high-quality Brazilian players which are well worth investing in, including Taison, a solid CAM that has good all-round stats for the position. Dede and Maicon are also two good centre backs, though Maicon’s lack of pace will need to be compensated with a fast full back and perhaps a holding midfielder.

To make a good team great, use Chemistry Styles

A relatively cheap Ultimate team can include solid players, but in order to elevate them to compete with players who simply plough money into microtransactions, you’re going to need Chemistry Styles.

Chemistry Styles are relatively cheap on the transfer market, even those that offer +3 to two stats. Applying these to your starting 11 can help compensate for weaknesses, for example a striker lacking high finishing can be handed the Sniper Style and then be able to be much more consistent in front of goal.

Check the information of every player

Building a cheap (ideally Brazilian) team means that it’s unlikely you’ll know everything about each player in the squad, so hit the right stick over each of them and check their full stats to see where your team is strong and, more importantly, vulnerable. More importantly, learn each player’s stronger foot, especially for central players so you know which side to place them, otherwise you’ll see opportunities lost.

Having players able to cut inside and take shots is important, as a goalscoring midfielder is key to any team to clean up deflections or half-clearances. Making sure this player attacks the ball with his stronger foot for volleys and placed shots will give you a much better chance at scoring.

As always, packs are a coin flip

Packs remain a lottery where, once you have a focused strategy and team, are very rarely worth the investment. The main reason for packs is the return of contracts in bulk, but mainly it’s best to stick to the transfer market and get packs via FUT Draft.