Dark Souls 2 Guide – How to beat The Pursuer 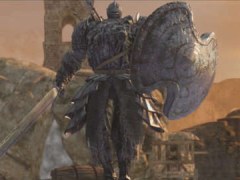 The Pursuer is the second boss found in Cardinal Tower, the area you reach just beyond the Forest of Fallen Giants. Once you’ve beaten The Last Giant, you’ll receive a key that unlocks doors that will take you to the mist leading to The Pursuer.

The Pursuer can be a very tricky opponent thanks to his lightning fast speed and sweeping attacks which can knock you off your feet. It’s important to have both a weapon and character level that can deal a solid amount of damage with every opportunity you’re given to attack, otherwise this fight will last too long, and The Pursuer usually gets the upper hand in prolonged battles.

If you’re having trouble finding a badass weapon to help you through the early hours of the game, check out our guide to grab the Fire Longsword, this’ll prove a great help for this fight.

The good thing is, if you fail to beat this chap on your first try, he rises from the ground from a purple smog every subsequent fight, giving you an opportunity to grab your souls before he’s combat ready.

The trick is to go into the fight as light as possible. If your character has a near-full equip load, rolls will be much slower, so ditch some for the fight. As much as The Pursuer’s attacks do incredible amounts of damage, it’s better to avoid the attacks entirely than block, as it’ll zap your stamina, leaving you vulnerable to follow-up attacks.

This fight is easy once you’re levelled up and understand the strategy. If you’re far away, The Pursuer lunges at you with an upward swipe, dodge towards his shield and get a strike or two at his back. Keep circling towards his shield hand (with your own shield up) as he prepares an attack.

The pursuer levitates, so make sure you don’t follow him near edges as you’re putting yourself at unnecessary risk. The same applies for near the edges of the fight area; try to keep yourself central to give as much room to dodge.

The Pursuer’s main attack is a three-strike combo of horizontal sweep, shield bash and jumping plunge. Block the first attack, move right to avoid the next one and walk under his jump, which will give you plenty of time to attack his back once again. Make sure you only drop the shield once he’s finished his combo.

Make sure you stay close to him and always near the shield. keep switching between shield up and down to recover stamina.

His glowing stab attack does cause damage, but is easy enough to avoid, just keep an eye out for when his sword glows blue and roll to the right.

Follow these strategies and The Pursuer will soon be dead, rewarding you with the Soul of the Pursuer and the Ring of Blades, which increases your physical attack damage.