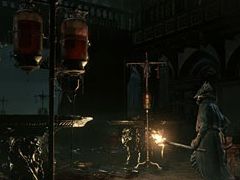 Bloodborne Guide: How to get into Iosefka’s Clinic

From the Forbidden Woods lamp, head right over the bridge, dodging the spiked log as it swings. Continue on the main path until you come across a group of villagers near a series of bonfires. Above you will be a couple of villagers throwing oil urns as well as dogs. Kill everyone here before moving forward.

As you pass these enemies you’ll notice a hill with white flowers on it to the left, head over here and down the winding path beyond the dismantled wooden house. You’ll come to an iron gate – go left of this and up the hill, towards the home with the pink lamp. Around this house are many dogs in cages, kill them before any jump out. Behind the house is an obscure entrance to a cave; head through here into the poisonous swamp.

There are several giants in this swamp, but ignore them and run straight across towards the green light. There’s an entrance opposite with a ladder inside, climb all the way up to reach Yharnam, right where you began the game. Open the gate ahead to reveal a shortcut back to the front entrance of Iosefka’s Clinic, then double back down the stairs behind you.

Climb the ladder onto the rooftops to get inside the Clinic. The path to the right leads to a door leading back to where you began the game – the left a chest which contains the Cainhurst Summons, which you’ll need later in the game. There’s a staircase in the centre of the passageway leading to Iosefka. Take note that if you chose to send any inhabitants throughout the cities to the Clinic for shelter, there’ll be some enemies littered throughout the area too. Killing her will also reward you with the Oedon Writhe rune, which restores QuickSilver Bullets with Visceral attacks.