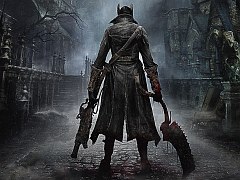 Update: Now that Bloodborne is out in the shops for real people to buy, Brett has finally had a chance to check out its multiplayer functionality. His impressions are below, and you can see his final score over there on the right. You’ve probably seen it already. That’s OK.

Like most elements of Bloodborne, multiplayer broadly resembles the Souls series while also changing things up. Summoning is handled via players ringing one of three bells: one for invasion, one offering assistance to others in their world, and the last asking for help in yours. To use the bells players have to spend Insight points, gained via progress/levelling, or from the Madman’s Knowledge loot found on enemies and in the world. As ever there’s no lobby, with players instead free to continue with their journey while the game finds a match for them in the background.

Invading other people’s worlds is always fun, especially when you outmuscle your opponent. There’s something sinister-yet-satisfying about jumping in and completely ruining some poor stranger’s day as they toil through the streets of Yharnam. In some ways, invasion can be seen as the true test of a Hunter’s technique and skill, as human opponents are generally far less predictable than the CPU. On the flipside, being invaded by a far superior player can be horrifically tense, especially when you’re desperately searching for a lamp to return safely to Hunter’s Dream with your hard-earned Blood Echoes.

It’s a shame, then, that while co-op play (more on that in a bit) seems smooth enough, PvP suffers from some troubling network issues. Hit detection can be a little iffy, with delays in strikes registering, and it will take at least a fight or two to compensate for the lag. Rather than a ‘stuttering’ effect, it often feels more like there’s a second or two delay between seeing your opponent’s actions and their actual impact. Your health bar will deplete while staring at a stationary foe, before they suddenly zoom into your face striking a pose that says ‘I’ve just landed a crushing blow’. Equally, your opponent will whiff into thin air, appearing not to have made contact, only for your health to zap away a short while later. For a game based on split-second reactions and timing, it’s a huge issue.

Co-operative play, on the other hand, is excellent, with latency issues not as pronounced, perhaps due to it not being as dependant on sheer timing. Joining a fellow Hunter as they require assistance for a boss fight is great, and can lead to moments that match the thrill of solo encounters. While it lacks the true isolation that defines a lot of the Souls experience, the fact that you can’t assist the person you’ve joined in any other way than attacking enemies adds to the tension when either of you are down to very little health.

Overall, multiplayer is in keeping with the ethos of the series. PvP is iffy, and can annoy especially when you’re working hard earning Blood Echoes. But when you join up with other players, it somehow matches the thrills of when you come up against any foe alone.

Bloodborne’s world is somewhere you never want to be but also cannot stand being away from. Time not spent in its locales is instead spent thinking about them. It takes the best from both Demon’s and Dark Souls, updating the combat to ensure it’s at its fastest and fluid best, as well as creating the most wonderfully varied and disturbing environments. This isn’t just the best Souls game, it’s the best game on PS4.

While it lacks ‘Souls’ in its title, most if not all of the core mechanics of the series remain. It’ll take a while for long-standing fans to stop calling Blood Echoes ‘Souls’, Lamps ‘Bonfires’ and Hunter’s Dream ‘The Nexus’, as they’ve become so ingrained in our collective, battle-scarred brains. But a sense of familiarity is welcome, as the overhaul of combat will serve as the biggest learning curve.

Gone are the traditional sword-and-shield/mage setups, replaced in the main with sword-and-gunplay. Players accustomed to turtling or staying as far away from the battle as possible with their arrows and magic attacks will have to drastically adjust their gameplan in Bloodborne, and that’s a good thing. The changes mean that fights are faster, as you have to act first thanks to an inability to block. Taking on multiple opponents – while still incredibly daunting – feels achievable as your character isn’t rooted to the floor. Locking onto an enemy means you’ll pivot instead of combat rolling when pressing Circle, so you maintain a sense of control instead of frantically escaping attacks and hoping you don’t land on the sharp end of something terrible.

Switching between opponents also feels more intuitive than before. A flick of the stick now lands on the correct target more often than not.There’s an option for auto-switching, but the right stick more than suffices. Lock-on still falls short during boss battles with giant enemies, though, often focusing on the middle of their body and causing the camera to lose sight of everything when you close in on the target.

Your gun, meanwhile, acts as the new counter-attack. You can choose from pistol and blunderbuss to start, but on your travels will unlock more types from rifle to flamethrower. While firearms don’t inflict massive injury, they can be used during an enemy’s strike to stagger them, opening a window for ‘Visceral Attacks’, which deal far more damage. It keeps the player active and engaged in combat, rather than looking to sneak around enemies for backstabs.

Overall there are far fewer weapons in Bloodborne than previous Souls titles, but each weapon has an alternate attack mode. A press of L1 will see your blade extended to completely change its blows. The Saw Cleaver, for instance, has short range and vertical slices as standard, but with a press of L1 its reach is doubled. Fewer weapons means less time is spent in the menus searching for the ‘right’ tool for the job, and more time is spent learning how to adapt what’s there to the given situation.

While Miyazaki’s previous Souls games both presented wonderfully varied worlds, each location tended to remain static throughout your time within it. In Bloodborne, everything goes to the dogs before your very eyes. There is a plague spreading through the world, and as a Hunter, you’re tasked with stopping the disease. Trouble is, for every boss you kill, the infection seems to get worse. Past foes appear to have deteriorated as you return to old locations: those that once wielded lamps now hold up an eyeball-ridden monstrosity that’s genuinely unsettling. The city of Yharnam decays to the point of enemies not even acknowledging your existence any more, without direct confrontation at least. The world goes from a deep orange to a tragic purple in hue. Sheltering inhabitants, who offer side quests and may have once told you to “bugger off”, now wail in despair when you tender your services.

It is this sense of a living, dying world that makes Bloodborne a wonderful, yet horrific place to be. It feels eerily reminiscent of Resident Evil 4 and the lingering dread of its early stages. The player is powerless, despite all the tools at their disposal, to stop the rot around them. Few developers use their environments to tell a story like From Software: even the opening city of Yharnam can be explored for hours upon end without discovering all its secrets.

Progressing through the world of Bloodborne is slightly different to Dark Souls. That game had a series of very clearly defined hubs, all intersecting through pathways that, once traversed, were easily memorised. The discovery of a new area was represented by an unlit bonfire. But in Bloodborne, discovery equates to the opening of new pathways that lead back to already discovered lamps. Rather than move from lamp to lamp, you’re instead creating a spider’s web of sorts, so that at all times you can head back to this one safe zone, creating shortcuts to bosses and as yet unexplored locations, which will in turn reward you with a new lamp.

It’s a wonderful system, but comes at a cost. In this new setup, it’s more than likely you’ll get lost. The game attempts to counter this with Shining Coins, dropped by troll enemies frequently met on your travels, which can act as breadcrumbs, but this feels like compensation for a known shortcoming, minor or not. It’s a shame that an attempt to create greater exploration has, at times, come at the cost of the player losing their way.

That said, there’s always the sanctuary of Hunter’s Dream, Bloodborne’s hub world where players can upgrade their guns, swords, buy new items, equip runes and enter the procedurally-generated Chalice Dungeons, too. Weapons can be upgraded through shards collected throughout the world, with higher-level upgrades requiring rarer stones, as in Dark Souls. Runes come a little later on, and can affect the player or the world itself. You can increase simple things like stamina and HP, but also how many Blood Echoes each enemy drops, or their likelihood of dropping items upon death.

While Bloodborne may evolve the series in many areas, some legacy issues persist and can become frustrating at times. Despite being on PS4, Bloodborne still struggles to hold a consistent framerate. During one particular boss fight it slowed dramatically, only just making double figures. Load times are also a problem. It can take up to a full minute before you’re awoken at a lamp after death: it may not sound like a long time, but it really is when all you want to do is sprint back to a boss and get on with it. (As an aside: the load screen also simply displays the title, rather than artwork or anything vaguely more interesting. An odd choice for a game with such a commitment to world-building.)

But these issues are never able to impede Bloodborne’s excellence. It is Dark Souls 3 in all but name, a natural evolution for the series. There’ll be times when you feel genuinely lost, frustrated and unsure of your next step. But you will carry on, you will beat it, and when you do, there’s no other game that can make you feel more elated about doing so.

A superb, intelligent evolution of the series.
10 Combat best it’s ever been. Better lock-on system. The world is incredibly varied. Framerate issues.