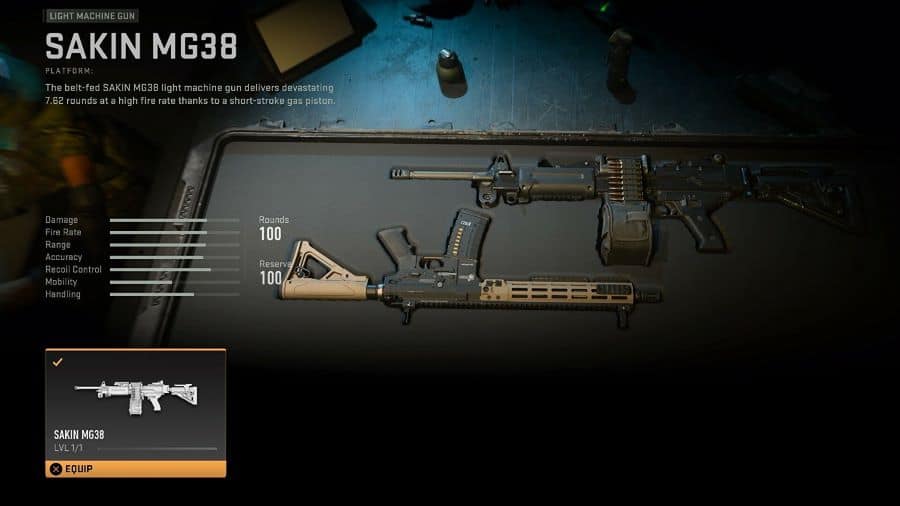 In a field already crowded with excellent Light Machine Guns, the Sakin MG38 makes a name for itself through sheer lasting power, boasting an incredibly large clip size in Modern Warfare 2.

As long as you find somewhere defensible to set up, the Sakin MG38 will serve as an incredible turret-like option, cutting down enemies before they can get close.

The Sakin MG38 is undoubtedly powerful, it can take some tweaking to really be used to full effect. We’ll help you maximize its potential with our Modern Warfare 2 guide.

Like all LMGs in Modern Warfare 2, the Sakin MG38’s incredible rate of fire and clip size is balanced out by achingly long reload times.

You’ll need to switch to a different weapon if your clip empties with opponents anywhere close, and only start the reload process when you feel absolutely certain that you aren’t about to be jumped.

Thankfully, the Sakin is better than any other LMG when it comes to minimizing the times when you have to reload. With 100 bullets per clip, you can easily survive multiple quick skirmishes in a row, without feeling compelled to reload constantly.

Modern Warfare 2 – Best Perks to Equip With the Sakin MG38

The Fast Hands perk is a lifesaver when equipped with the Sakin MG38, drastically cutting down on reload times. The Sakin’s incredible clip size means that Fats Hands is less of an absolute necessity than with other LMGs, but it still comes highly recommended.

The Sakin MG38 can take a little time to get set up and working properly, and most definitely isn’t a run-and-gun option. Taking along a second main weapon can boost your loadout’s overall mobility and versatility.

Setting up and dealing damage with the Sakin from a defensible position is greatly encouraged in Modern Warfare 2, but it can make you a target as often as it gives you an advtantage. Having a rapid health regen that you can activate at a time of your choosing is incredibly beneficial, and will help you stay alive for much longer.

The Sakin MG38 excels at area denial, and the Claymore will help considerably in this area. Setting up a proximity-based explosive in just the right position can often devastate an enemy team before you even have to open fire.

Once we’ve had time to test out the full range of attachments for the Sakin MG38, we’ll let you know the absolute best ones to add to your loadouts.

Modern Warfare 2 – Best Weapons to Pair With the Sakin MG38

If you really want to hunker down and pick off foes from far away, the Signal 50 will allow you to do so before they’ve even seen you. This Sniper Rifle allows you an incredible long-range option, and can help to spot advancing opponents to be takne out with the Sakin.

While the Kastov has been toned down slightly from its blisteringly fast initial performance in Modern Warfare 2, it still serves as an excellent close-range tool. The Sakin is not a mobile weapon by any means, and the Kastov-74u will allow you to move from point to point and open fire as needed.

What Is the Best Sakin MG38 Loadout in Modern Warfare 2?

How To Unlock The Sakin MG38

The Sakin MG38 is one of the easiest weapons to unlock in Modern Warfare 2. Simply level up to rank 11 to be able to add this gun to your custom loadouts.