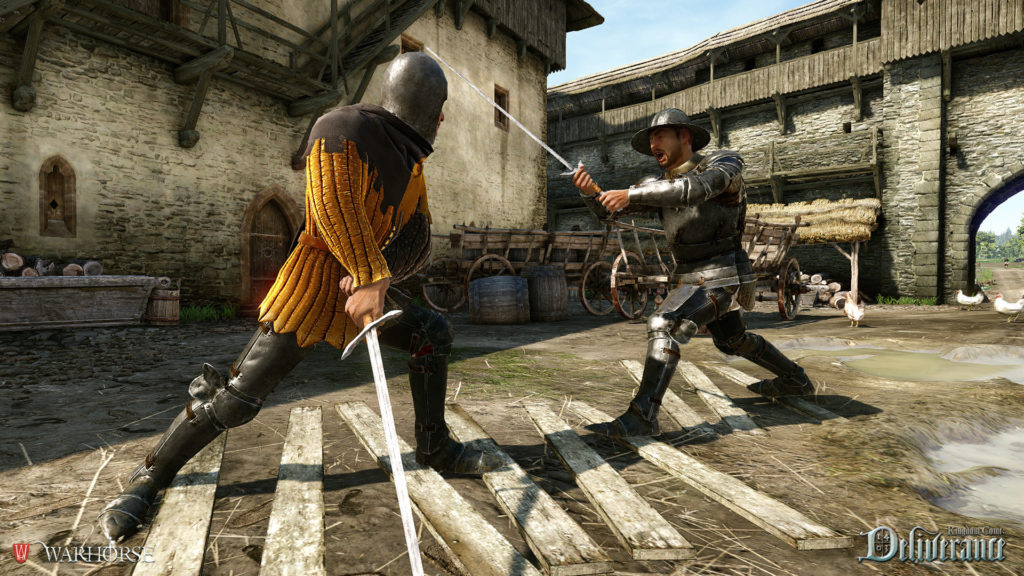 The mechanics in Medieval role-playing game Kingdom Come: Deliverance are complex, and none are deeper than the combat system. If you want player character Henry to survive the trials and tribulations of warfare in 15th century Bohemia, here are a few tips to turn you from a failing fool into a fighting force!

Movement and timing are key to combat in KC:D. Henry is a soft baby boy and can’t take many hits at the start of the game. Rather than trading blows, try and weave back and forth so you’re harder to hit.

Timing is important to chain together your attacks: time them so you press the next attack as soon as the first one hits. Pressing the attack button too quickly will break the chain and your opponent will have an easier time blocking. Timing is also important for dodging and blocking (see below).

You have two main attacks in the game: swings and thrusts. Swinging or slashing attacks can hit different parts of the body, but are slower. You can thrust or stab with a weapon to your opponent’s head or body. String these attacks together to surprise your opponent… to the death!

Combat Tip 2 – There’s a star, man, waiting in the game

The main gimmick of KC:D’s combat is its directional system, similar to the combat in For Honor. When you lock onto an enemy a five-pointed star with a point in middle appears in front of them. These are the different directions you pick to slash your foe. Are they guarding their head? Slash from the bottom two points. Are their arms low? Chop your sword down on their head.

Picking the direction of your attack is important, as you can attack the side foes are not guarding, and it allows you to target different parts of the body. Is your opponent wearing a helmet and thick chest armour but their arms are bare? Target that soft exposed flesh!

How do you want to deal with your enemies? KC:D gives you plenty of choice.

Henry can pick from swords, axes, maces, as well as long broadswords or polearms. He can pick opponents off at range with archery, sneak up on them with a dagger to the back, or solve his problems with bare fists.

The weapon you pick is important for more than just style, though. Swords are great against foes with weak or no armour, but will bounce off chain mail. Heavy weapons, like maces and axes, work well against armoured knights and soldiers.

However, at the start of the game you’ll be terrible at all of them, as you start off with basically zero skills. 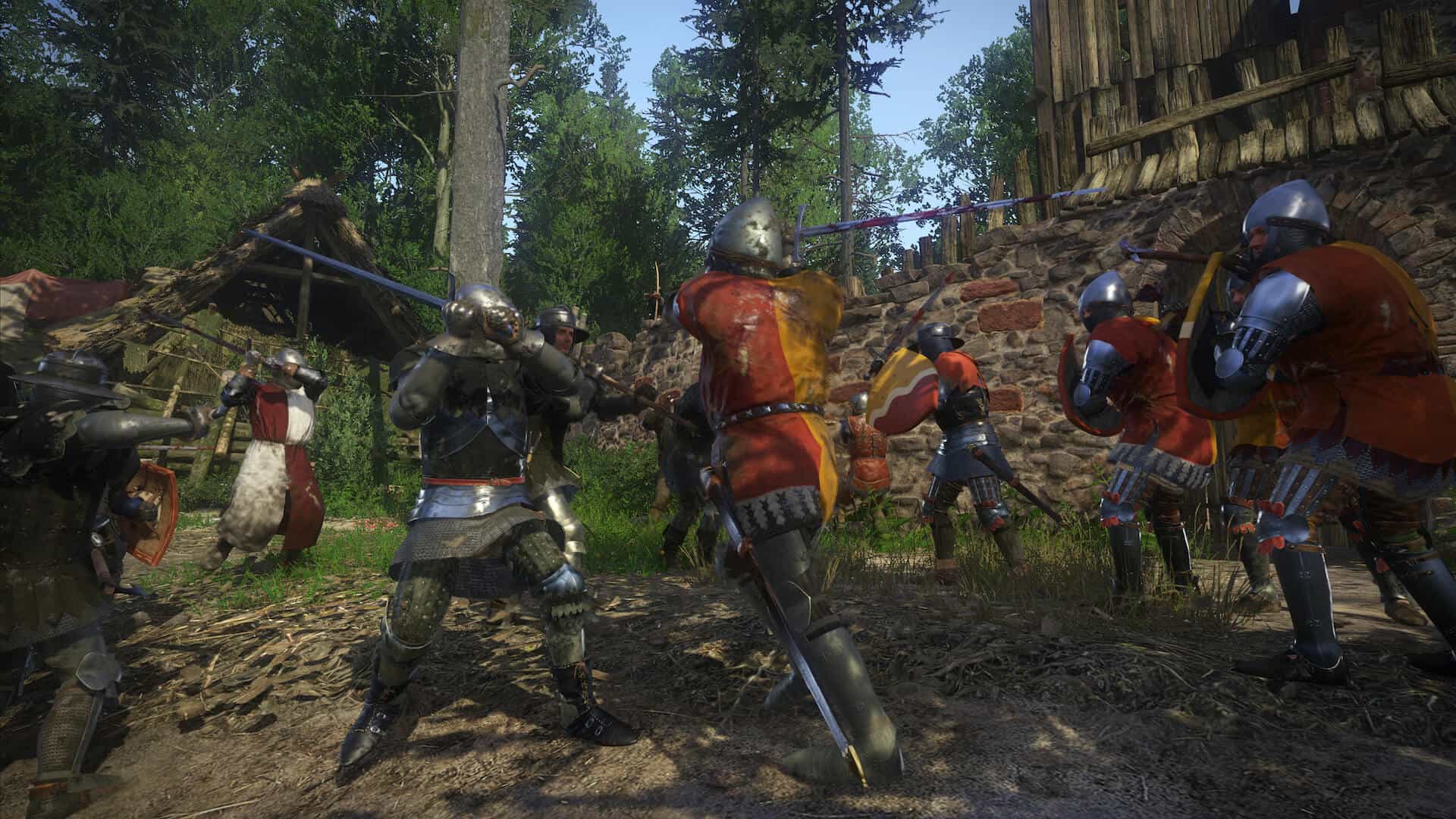 There are seven direct combat skills: sword, axe, mace, bow, unarmed, defence (which improves your ability to block and dodge attacks) and warfare (your overall combat ability and how fast you attack). Your main stats of agility and strength will also impact how much damage you do, and vitality determines how much damage you can take.

One important point about archery, by the way: until your bow skill hits level five, Hal’s bloody useless. His aim will sway and wander like a drunk after last call at the bar, and shooting the bow without wearing an armguard will cause damage to Hal’s soft, puny body because the bow string cuts into his wrist. Stupid Henry! Hold the bow properly! So If you want to be an archer you need to put more time into practicing it, especially because a surprisingly viable tactic is to run backwards from enemies while shooting them in the face.

KC:D’s Skyrim-esque development system means you level up based on how often you do any particular activity. Swinging a sword about will build your sword skill, shooting lots of arrows will build your bow skill, and so on. Levelling up will also unlock perks (extra abilities or passive buffs that will make Henry a force to be reckoned with). So the best way to git gud at combat is to pick one or two weapons and practice, practice, practice. And the best way to practice is to spend a….

After the opening prologue missions, KC:D starts properly once you get to the town of Rattay.

The game opens up here and allows you to faff about or head off exploring and questing, but if you want to get a headstart with fighting, make a beeline for the lord of the castle to start the quest Train Hard, Fight Easy.

This will introduce you to the combat arena east of the town and Sir Captain Bernard, the captain of the forces belonging to Henry’s lord. He’ll take you under his wing and teach you how to fight properly. This is basically the game’s version of a combat tutorial. Training with Bernie is a really useful way to build your skills without risk of dying or needing to start fights with complete strangers (unsurprisingly, the town bailiffs won’t take kindly to Henry rough-housing the locals).

He’ll teach you how to strike with a sword, block and dodge attacks. He’ll also teach you archery and give you a decent bow to use during the early game. After this initial training, you can return to Bernie at the combat arena daily to practice with different weapons and learn new techniques, including combos and Master Strikes (more on that below), once you develop your skills.

While you can train with wooden practice weapons, do keep an eye on Henry’s health. Unlike the initial training sessions where Bernie will go slow and easy, during these sessions he’ll attack faster and won’t stop until you surrender (or beat him, but that won’t happen until your skills are much higher). It’s easy to start bleeding and soon die if you choose to be stubborn fighting the captain.

He’ll also give you quests to hunt down bandits (the perfect body bags on whom to practice your fighting skills). Finally, Bernie will teach the BDFPB of KC:D. 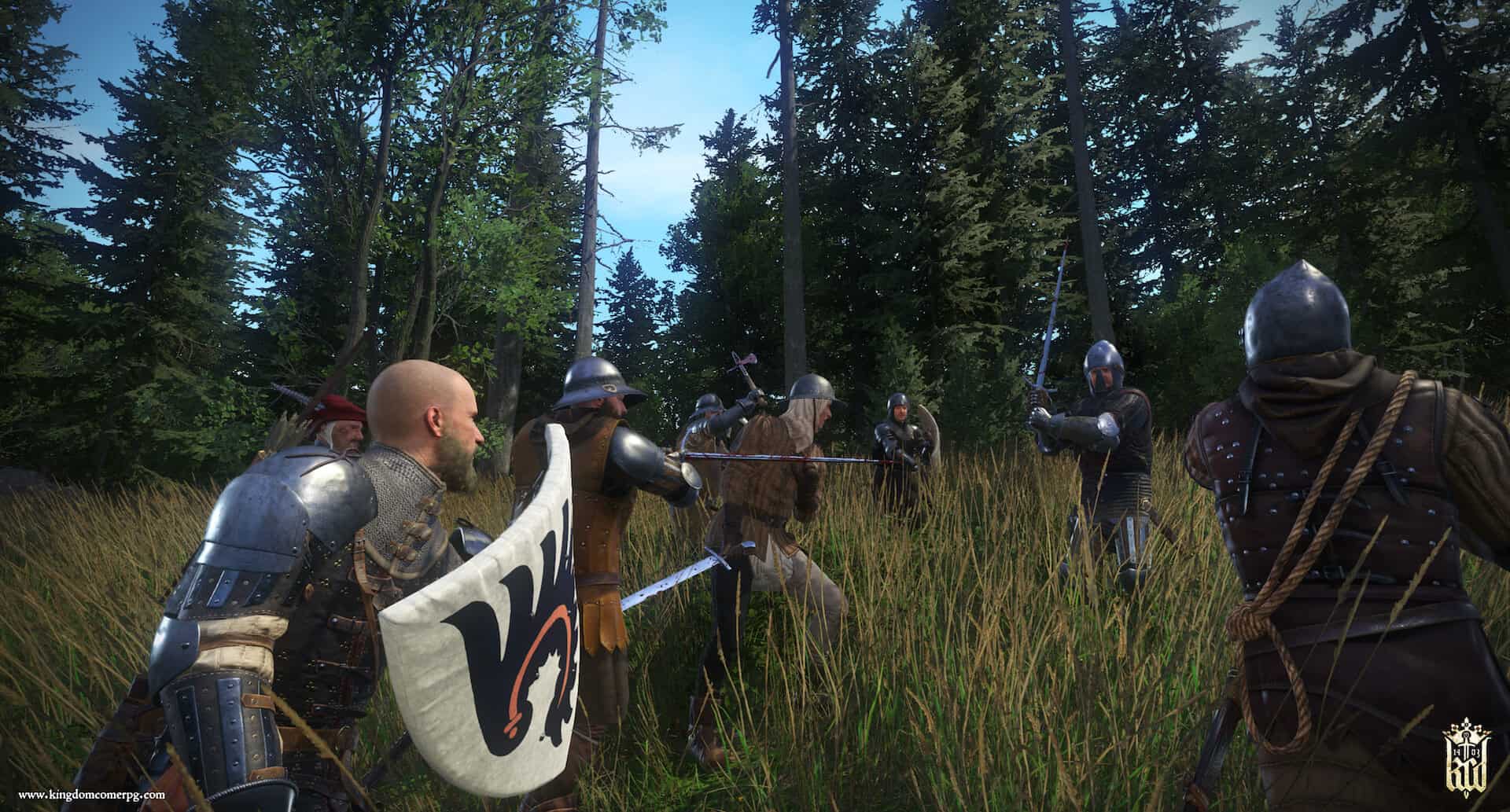 These are the more advanced aspects of KC:D’s combat that you can learn and practice with Sir Bernard.

Firstly, blocking. Holding the block will deflect attacks at the cost of stamina, but it’s not that simple. Each weapon has a different defence parameter, which determines how much damage it can absorb while blocking. Later on, you can equip a shield which is easier to block with and costs less stamina.

Dodging. Sir Bernard will also teach you to dodge when your opponent commits to an attack. Simply flick the joystick to one side when the foe winds up to hit you and the game will slow down, a sound cue will be heard and you’ll nimbly step out of the way of the attack. Easy!

Next, feint. Trick your opponent into blocking in the wrong way by choosing an attack direction, holding the attack button, then switching attack direction just before releasing the button. If you time it right, you’ll surprise your foe and do a good bit of damage.

The most important skill to learn is Perfect Block. You need to time your block with the enemy’s swing. Press block when a green shield appears in the middle of the attack star and you’ll parry the attack without using any stamina and leaving your opponent open for a hit.

Similar to picking an attack direction, you can choose a blocking direction on the star. If your block matches the attack direction, the window of opportunity to perform a Perfect Block increases. So if the attack comes from the right, it’s better to block to the right. It’ll take a lot of practice to learn the tells and attack patterns of opponents. Later on, you can learn Master Strike, which is an upgraded Perfect Block with an automatic riposte counter-attack.

With all these skills, you’re about 1% less likely to die in the harsh, challenging world of Kingdom Come. Good luck!